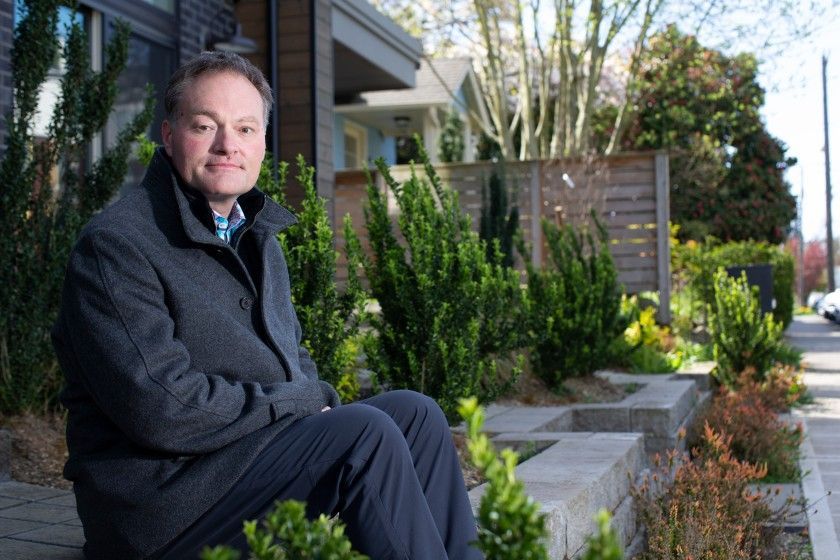 As critically ill, elderly patients streamed into his emergency room outside Seattle, Dr. Ryan Padgett quickly came to understand how deadly COVID-19 could be.

Of the first two dozen or so he saw, not a single one survived.

It took longer for Padgett and his colleagues at EvergreenHealth Medical Center — the first hospital in the country to treat multiple coronavirus patients — to learn how easily the disease could spread.

At first, the medical workers wore only surgical masks and gloves. Later, they were told to wear respirators and other gear, but the equipment was unfamiliar and Padgett couldn’t be certain he put it on and took it off correctly each time.

A 6-foot-3, 250-pound former football star who played for Northwestern in the 1996 Rose Bowl, he wasn’t fazed by much.

“To worry about myself, as a 44-year-old healthy man, didn’t even cross my mind,” he said in an interview Monday.

But on March 12, with his wedding day two months away, Padgett became the patient.

Soon after being admitted to his own hospital with a fever, cough and difficulty breathing, he was placed on a ventilator. Five days after that, his lungs and kidneys were failing, his heart was in trouble, and doctors figured he had a day or so to live.

He owes his survival to an elite team of doctors who tried an experimental treatment pioneered in China and used on the sickest of all COVID-19 patients.

“This is a movie-like save, it doesn’t happen in the real world often,” Padgett said. “I was just a fortunate recipient of people who said, ‘We are not done. We are going to go into an experimental realm to try and save your life.'”

Once his colleagues at EvergreenHealth realized they had run out of options, they called Swedish Medical Center, one of two Seattle hospitals that has a machine known as an ECMO, which replaces the functions of the heart and lungs.

But even after the hospital admitted him, doctors there had to figure out why he was so profoundly sick.

Based on the astronomical level of inflammation in his body and reports written by Chinese and Italian physicians who had treated the sickest COVID-19 patients, the doctors came to believe that it was not the disease itself killing him but his own immune system.

It had gone haywire and began to attack itself — a syndrome known as a “cytokine storm.”

The immune system normally uses proteins called cytokines as weapons in fighting a disease. For unknown reasons in some COVID-19 patients, the immune system first fails to respond quickly enough and then floods the body with cytokines, destroying blood vessels and filling the lungs with fluid.

The doctors tried a drug called Actemra, which was designed to treat rheumatoid arthritis but also approved in 2017 to treat cytokine storms in cancer patients.

“Our role was to quiet the storm,” said Dr. Samuel Youssef, a cardiac surgeon. “Dr. Padgett was able to clear the virus” once his immune system was back in balance.

Dr. Matt Hartman, a cardiologist, said that after four days on the immunosuppressive drug, supplemented by high-dose vitamin C and other therapies, the level of oxygen in Padgett’s blood improved dramatically. On March 23, doctors were able to take him off life support.

Four days later, they removed his breathing tube. He slowly came out of his sedated coma, at first imagining that he was in the top floor of the Space Needle converted to a COVID ward.

He soon became more conscious of his surroundings and had a FaceTime conversation with family members, who hadn’t been able to visit because of the hospital’s coronavirus lockdown.

“It’s an incredible thing to survive a brush with death and not be able to see and be with your most loved people,” Padgett said. “And when everyone on staff who comes to see you has to be in a spacesuit, you just feel like this pariah. The isolation was pretty devastating at times.”

On March 31, balloons, gifts and letters came in the door. It was his 45th birthday. “My birthday cake was an ice chip,” he said, recalling how grateful he was for his first sustenance by mouth.

As Padgett got to know Youssef, Hartman and other team members, they told him about a 33-year-old woman — a mother of three — who was in the hospital as well, also having experienced a cytokine storm. He saw the team’s excitement when they tried the approach on her, and she too recovered.

Padgett went home on April 5. He said Monday that he faced a long, slow recovery, physically and cognitively. He expects to be a better doctor, reminded how devastating an illness can be to a patient and a family.

Returning to the ER won’t be easy, he said. “But that’s my home, that’s what I do,” he said. “I enjoy that everyone-in-the-foxhole mentality.”

And one day before then, Padgett and his fiancee, Connie Kinsley, plan to have a small wedding ceremony with a few friends on their boat moored on a Seattle lake.

Don't Miss it How the Coronavirus is changing the future of work | Covid-19 Special
Up Next Coronavirus: Death toll in the UK reaches 422 – BBC News

Ku worked in Chile for more than 20 years as an importer and exporter, but she returned to her home…

Retailer Le Château is seeking court protection from its creditors while it winds down its operations and liquidates its assets.…

Here’s what you need to know:A field hospital that was opened in Milwaukee to accommodate the surge in Covid-19 patients…

AstraZeneca has resumed the US trial of its experimental COVID-19 vaccine after approval by American regulators. An oversight panel has…

Two months into the Melbourne lockdown, Erin Lyall stopped being able to get out of bed. She used to wake…