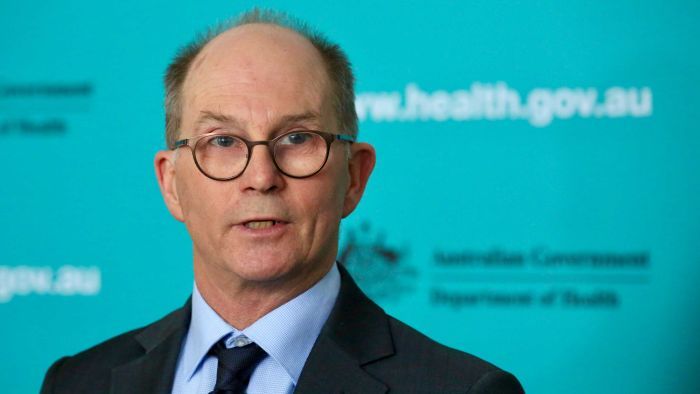 Deputy Chief Medical Officer Paul Kelly has not ruled out making the Government’s coronavirus tracing app compulsory for all Australians.

Key points:Paul Kelly says app will be voluntary at firstGovernment needs 40 per cent to download app for it to workPM says downloading the app a matter of ‘national service’

The app will use data from people’s phones to tell health authorities who has been in close contact with a confirmed COVID-19 case, and who may need to be tested.

The Government has said 40 per cent of Australians would need to sign up to the app for it to have enough data to function properly.

When asked if the panel of health experts advising the Government was considering recommending the app be compulsory if less than 40 per cent of people signed up, Professor Kelly said making it voluntary at first was “the way to go”.

“I’ve always been a believer in the Australian people making the right decision,” he said.

“As I’ve said, this is an add-on to what we have in terms of contact tracing and case finding, so I think we need to make the case for an app.

“I think we start with voluntary and see how that goes.”

Professor Kelly said work was ongoing to address privacy concerns around the app and the data it would store.

“We have to work to make sure this is as good and safe [as it can be] and cover off privacy concerns and so forth,” he said.

The Government has said the app, if successful, could lead to an early easing of social-distancing restrictions.

What the experts are saying about coronavirus:
Voluntary download the Prime Minister’s ‘preference’

Speaking on Hobart’s Triple M radio station earlier on Friday, the Prime Minister also did not rule out making the app mandatory.

“In Australia my preference, my very strong preference, is that we do it this way where Australians are doing it by permission,” Scott Morrison said.

“My preference is to give Australians the go of getting it right.

“That’s my objective, that’s my Plan A and I really want Plan A to work.”

Mr Morrison said he understood it would not be something people would do ordinarily, but that this was “not an ordinary time”.

“I’d be calling on Australians to do it, frankly, as a matter of national service.”

The Government is modelling its app off one used in Singapore, where only 20 per cent of people have downloaded it.

The app is called TraceTogether and uses Bluetooth to create a record of other nearby phones that also have the app.

But it does not track people’s location.

The Government has said the data collected by its tracing app would be highly secure, with only health authorities allowed to access it after a positive case was identified.

The Prime Minister said this week that Attorney-General Christian Porter is in the process of making sure relevant privacy safeguards are in place.

Time to ‘stay the course’

As at Friday afternoon, the number of cases nationwide was 6,498 with 65 deaths.

Of the two deaths reported on Friday, one was the first person under 50 in Australia to die due to coronavirus.

The man in his 40s was a crewman on board the Artania cruise ship and died in Royal Perth Hospital.

“Australia continues to do well, we have continued to have [fewer] cases per day than we were getting in previous weeks,” Professor Kelly said.

“Over the last two weeks, we’ve continued to see a flattening of the curve.”

Professor Murphy said while now was a time to “stay the course”, National Cabinet would consider whether restrictions on elective surgeries could be relaxed when it meets again next Tuesday.

Don't Miss it Coronavirus in Turkey: Istanbul has its health workers' backs | DW News
Up Next Coronavirus: People in Beijing begin to head outdoors – BBC News