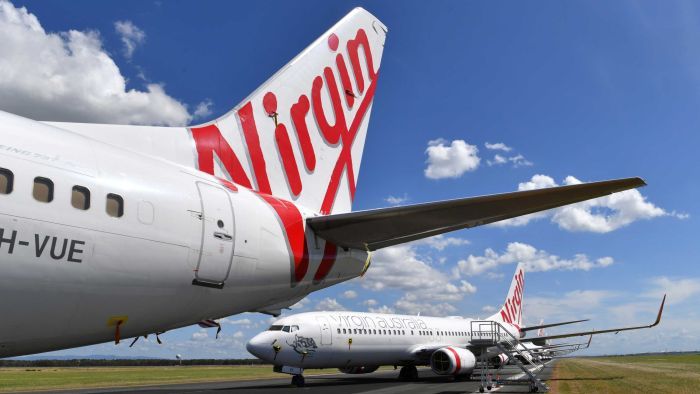 The Queensland Government is offering $200 million to help rescue Virgin Australia, which is headquartered in Brisbane, but says it will not be enough to keep the airline afloat.

Minister for State Development Cameron Dick said the Federal Government must lead a national response, which should include additional funding from the states and territories.

The airline has asked for a $1.4 billion loan from the Commonwealth to help it through the coronavirus pandemic, but it has so far been offered a share of $165 million.

Mr Dick said the Queensland funding was conditional on Federal Government backing, as well as debt restructuring, shareholders and bond holders doing their bit, the airline keeping its head office in Brisbane, and ongoing regional flights.

“Queensland can’t do this on its own,” he said.

“If we are going to have two national airlines at the other side of this pandemic, then all governments need to come together to ensure that is the case.

“To have competition means that prices are lower and that’s in everyone’s interests.”

Yesterday the Federal Government announced it would spend $165 million to get Virgin and Qantas to run a baseline domestic service for the next eight weeks but did not commit to a bail out, saying its confident the market will come to Virgin’s rescue.

The news was not enough to stop the company from holding a meeting with unions and experts to discuss ways to avoid going into voluntary administration.

Thousands of staff have already been stood down and the company has gone into a trading halt.

Mr Dick said he was yet to speak with any other state or territory government about their willingness to contribute to a bailout.

But the early indication from other states and territories was that they would be reluctant to get involved. Western Australia’s Premier Mark McGowan and South Australia’s Premier Steven Marshall both noted that Queensland had more incentive to contribute because Virgin’s head office was in Brisbane.

The Victorian and Tasmanian governments said they did not have any plans to offer money.

Mr Dick said the prospect of foreign buyouts demonstrated the need for a national response.

“Any international investment underlines the point that it has got to be a national response to ensure the airline can continue.”

“The ultimate solution is to get the economy rolling again, we won’t be handing out billions of dollars unless it’s going to make a difference,” Mr Laming said.

“We can’t be distributing taxpayers’ money purely on the whim of what is an ambit claim for over $1 billion unless it makes a difference.”

New South Wales Labor MP Jason Clare said without two airlines, the task of crawling out of the coronavirus crater would become harder.

“Think of all the tourist jobs, all the destinations that Virgin flies to, we need two airlines so we’ve got enough planes in the sky to help the economy recover after the worst of this virus has come and gone.”

“What’s needed now is for the Commonwealth Government to step up and take an equity stake in this company urgently,” Mr Kaine said.

“The very worst thing that can happen is for this to be left to the market — the market has shown one thing consistently in aviation, and that is, it’s broken, it does not work.”

Mr Kaine said it was vital that two viable airlines survived to the end of the pandemic.

“The Federal Government needs to follow Queensland’s lead and make sure they have control now so that at the other end of this crisis, it’s going to be vital that the global gateway is opened up again,” he said.

Centre for Asian Pacific Aviation chairman Peter Harbison agreed that having a second airline was critical to the economy.

“In this case it looks like it is going to be necessary, if Virgin is to survive — and it must survive — for the Government to step in,” Mr Harbison said.

“If financiers won’t come to the party, then I think the Australian Government needs to.

“The Americans have shown the way with this. They both introduced equity and have given funds to what is actually the most profitable airline industry in the world, so they can still be there when this is all over.

“It’s just too important to lose it.”