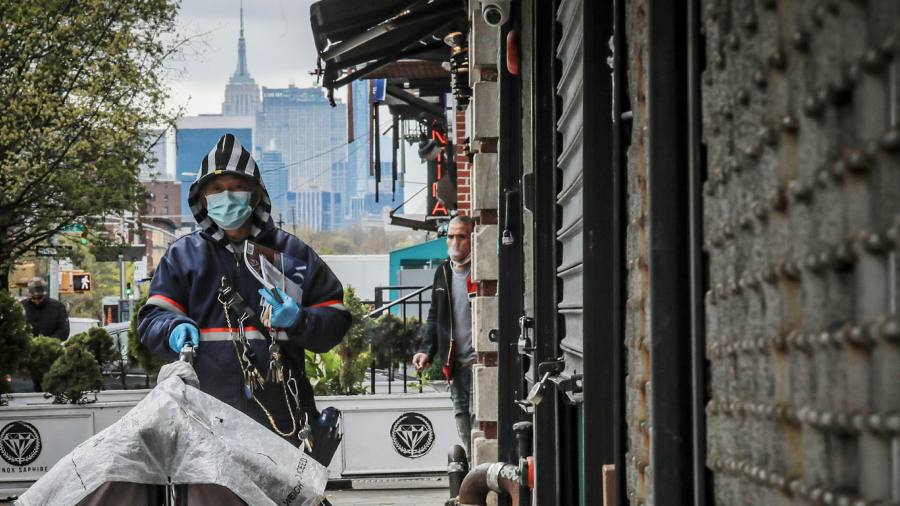 The US suffered a fourth consecutive day of coronavirus deaths exceeding 2,000, taking the total number of lives lost in the country during the outbreak to more than 32,000. A further 2,060 people died from Covid-19 over the past 24 hours, according to data from the Covid Tracking Project released on Friday afternoon, with 630 of those in New York and 322 in New Jersey, the worst and second worst hit states. The US has now recorded 32,356 deaths and nearly 687,000 reported cases since the outbreak began.

Wall Street advanced on Friday, notching its first back-to-back weekly gains since February, on hopes of a potential drug to treat Covid-19. The S&P 500 ended the day 2.7 per cent higher taking its weekly gain to 3 per cent. Meanwhile, the Nasdaq Composite rose 1.4 per cent on the day and 6.1 per cent for the week. Stocks were given a boost by reports that remdesivir, a drug produced by Gilead Sciences, has produced promising signs as a treatment against coronavirus.

The state of Texas laid out plans to begin gradually reopening parts of its economy that will see restrictions on retailers, surgeries and parks loosened from next week. Governor Greg Abbott announced that a new “strike force” comprising state leaders, health officials, as well as figures from the business and non-profit sectors had been formed to oversee the phased reopening of the state economy. Businesses not previously considered essential can offer “retail to go” services from April 24, but customers will still not be allowed in stores.

Amazon has converted some of its Whole Foods stores to serve online orders only, as the chain continues to struggle to meet demand. Social distancing measures at the chain have led to long wait times and lines outside stores and the company now believes focusing on delivery will allow it to serve a greater number of total customers per day.

US retailer Walmart said it will hire 50,000 more workers, on top of the 150,000 temporary staffers it has already taken on, as the retailer continues to see strong demand as consumers stock up during the coronavirus pandemic. The Arkansas-based group said the new workers will be hired on a temporary basis and provide existing associates flexibility to take time off and stay at home. The new workers will be hired as cashiers, stockers and personal shoppers as well as in the company’s distribution centres.

The UK has launched a special task force to develop a vaccine for the coronavirus at mass scale, said the government at its daily Downing Street briefing. Alok Sharma, secretary of state for business, energy and industrial strategy, announced 21 research projects along with £14m of funding, as well as a hub in Harwell near Oxford. “The government has set up a vaccines task force to coordinate the efforts of government, academia and industry towards a single goal,” he said.

Production and sales at Vale, the world’s biggest iron ore producer, tumbled in the first quarter because of coronavirus-related disruptions. The Brazilian company said it mined 59.6m tonnes in the three months ended March 30, down 23.9 per cent on the previous quarter and below their output guidance for the quarter of 63m-68m tonnes. Vale’s sales of iron ore plummeted to 51.6m tonnes, down 33.7 per cent from the last quarter of 2019. “In the future, the impact of Covid-19 … may be more significant,” the company warned..

Poland will not be able to hold presidential elections in their traditional form for at least two years because of the risks posed by the coronavirus pandemic, the country’s health minister said on Friday. Poland is due to hold a presidential vote on May 10, but opposition politicians have called for the vote to be postponed, arguing that it would be both dangerous and unfair to go ahead now.