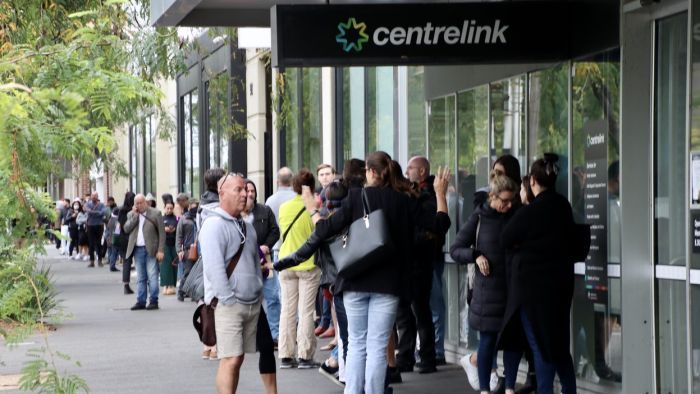 Aaron Smyth should still be performing in Billy Elliot: The Musical in Melbourne, but the coronavirus crisis last month cut short the show’s season at Melbourne’s Regent Theatre.

Just like that, the cast of 45, as well as the musicians, crew and ushers, was out of work.

“It was just like, ‘Clean out your dressing rooms tonight! You won’t be returning on Wednesday’. Pretty mind-blowing,” the 28-year-old said.

“Everything is completely wiped, and we are forced into the unknown.

“A lot of artists, we kind of know what this feels like, but it is more real than ever because everyone’s going through it.”

Millions projected to be out of work

The Grattan Institute has crunched the numbers on the unemployment fallout we can expect from the coronavirus pandemic by analysing how many Australians’ jobs rely on working in close physical proximity to others, such as performers.

Researcher Brendan Coates said the institute’s analysis found between 14 and 26 per cent of the entire Australian workforce will lose their job, if they haven’t already, as a result of government shutdowns and physical distancing rules.

That means as many as 3.4 million unemployed.

“That leads to an unemployment rate of somewhere between 10 and 15 per cent, which would be certainly the worst recession we’ve had since the 1990s and probably since the 1930s,” Mr Coates said.

This week, Federal Treasury forecast unemployment would rise to 10 per cent in the June quarter — a figure which hasn’t reached double digits since 1994.

“They’re in the same ballpark but the numbers are very uncertain,” he said.

Mr Coates said the effects of the response to the pandemic would not be felt evenly, with many higher-paying jobs able to be performed remotely, or from home.

If you are a teenager looking for work, it is not good news.

“Even though we’re all in this together in trying to make sure all Australians are protected from COVID-19, it’s younger Australians and lower-income earners who are more likely to be bearing the costs of those economic costs today,” Mr Coates said.

Second round of job losses likely to be worse

The report only looked at jobs lost due to the mandated shutdowns and physical distancing rules.

Mr Coates warned the economic prospects were likely to get worse.

“While there’s a lot that’s uncertain, you would expect that the second-round impacts are going to be very severe,” he said.

“So even those households and those businesses that are not directly affected by social distancing are … going to invest less and spend less, they’re going to have less business, because of the flow-on impacts from those directly affected firms, and those second-round impacts could be quite large.”

He warned against any thought of a swift economic recovery.

“The prospects for a rapid or V-shaped recovery are pretty slim,” he said.

“So we know that in periods where unemployment has risen in the past, it’s taken a lot longer to fall and I’d anticipate that this crisis, even though at its heart it is a public health-engineered recession, it’s going to be similar.”

“Those households and those firms that have had to take on debt, or they’ve had a hit to their incomes to get through the crisis, they’re probably more reluctant to spend on the other side and that means governments are going to have to stand ready to provide support as we move from a public health into a more classic recession.”

Is there any good news?

Mr Coates said while the economic news was bad, focussing on the public health aspect was the right thing to do and would mean the economy could recover sooner.

“It’s depressing, but we’re doing the right thing,” he said.

Aaron Smyth is now back at home on the Gold Coast, focussing on his dancewear brand and having a rest.

He is not expecting theatres to be returning to hosting large-scale shows any time soon.

“I think it will take time,” he said.