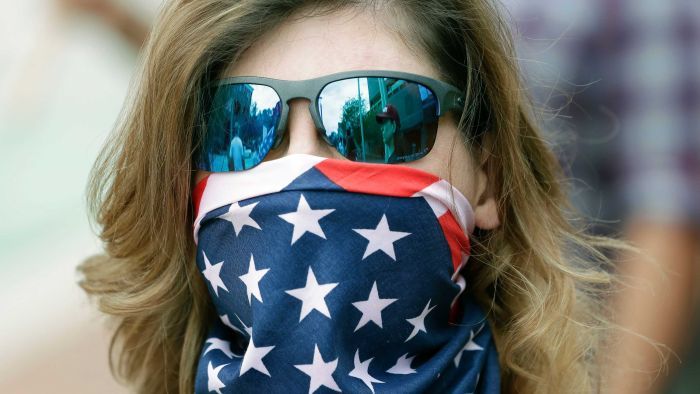 Only several months after reporting its first cases of COVID-19, the United States has become the global epicentre of the crisis.

Key points:All 50 states and several US territories have reported cases of COVID-19President Donald Trump is pushing for states to loosen restrictions on businessSome states will begin reopening businesses and schools in the coming weeks

The US has by far the world’s largest number of confirmed coronavirus cases, with more than 740,000 infections and more than 41,000 deaths.

Last Thursday, 4,591 Americans died over the course of a 24-hour period — the country’s largest single-day death toll to date.

But even as much of the nation is in the midst of a catastrophe, President Donald Trump is already talking about reopening America by May 1.

What are protests across the country calling for? And when might America’s recovery begin?

Here’s a rundown of how the United States is faring.

Have all US states been hit by COVID-19?

Yes. Community transmission of coronavirus was first detected in February.

By mid-March, all 50 states, the District of Columbia and four US territories had reported cases of COVID-19.

Infections continue to surge in the north-east of the United States.

New York — the country’s fourth-most-populous state — is the coronavirus epicentre of the US, with more than 236,000 confirmed cases and 17,000 deaths.

Neighbouring New Jersey has reported more than 81,000 cases and 4,000 deaths, while Massachusetts, Pennsylvania, California and Michigan all have more than 30,000 cases each.

According to the Centres for Disease Control (CDC), coronavirus deaths are likely under-reported across a number of states.

“Reported deaths are also likely underestimated because of incomplete follow-up on all reported COVID-19 cases as well as death among persons infected with SARS-CoV-2 who did not receive a COVID-19 diagnosis,” it said in a recent report.

Stay up-to-date on the coronavirus outbreak
What are protests across America calling for?

State governors across the US, who hold most of the power to implement lockdowns, have increasingly faced protests as restrictions grind local economies to a halt.

Many of the protesters are calling for an immediate lift on restrictions and the reopening of businesses.

The most recent demonstrations were in Texas, Indiana and Wisconsin, after similar protests in Ohio, Texas, North Carolina, Kentucky, Virginia, Michigan, Minnesota and Idaho throughout last week.

@realDonaldTrump tweet: LIBERATE VIRGINIA, and save your great 2nd Amendment. It is under siege!

Mr Trump appeared to encourage protesters with a series of Twitter posts calling for them to “liberate” Michigan, Minnesota and Virginia, all run by Democratic governors.

Democratic strongholds in dense urban centres such as Seattle and Detroit have been hit hard by the virus, while more Republican-leaning rural communities are struggling with the shuttered economy but have seen fewer cases.

But protests have happened in Republican-led states as well, including at the Texas Capitol and in front of the Indiana Governor’s home.

Texans chanted “let us work”, in a state where more than 1 million people have filed for unemployment since the crisis began.

The rally in Austin was organised by a host of Infowars, owned by conspiracy theorist Alex Jones, who joined protesters on the Capitol steps.

Public health officials have said the ability to test enough people and trace contacts of the infected is crucial before easing restrictions, and that infections could surge again unless people continue to take precautions.

What the experts are saying about coronavirus:
Are all US states locked down?

Not quite. Restrictions vary significantly across different parts of the US.

For example, most states have imposed a 10-person limit on gatherings. In California and New York, people may only leave their house for essential needs or to go to work.

Photo:
The ferris wheel on Santa Monica pier in Los Angeles was lit up in blue to show support for medical workers and first responders. (AP: Mark J. Terrill)

Restaurants and bars are shut across much of the country except for providing takeaway.

Most states have imposed school closures since March, many which will last until May. California Governor Gavin Newsom has said schools may not open there for the rest of the school year, which ends in late June.

Nevertheless, the states of North and South Dakota, Nebraska, Iowa and Arkansas all have few or no restrictions at all.

Texas and Vermont, both of which have Republican governors, will soon allow some businesses to reopen while still observing coronavirus-related precautions, Mr Trump announced over the weekend.

For the first time in weeks, people have been able to access some beaches in Florida but were still subject to restrictions on hours and activities.

Other states will look to transition out of lockdown in the coming weeks.

Utah Governor Gary Herbert said the state is aiming to reopen restaurants and gyms and resume elective surgeries in early May.

Your questions on coronavirus answered:
When might the recovery begin?

It is not entirely clear.

Different states will begin easing restrictions and reopening businesses at their own pace.

According to the US Department of Labour, 22 million Americans filed unemployment claims in the four weeks to April 11. Many economists say a recession is inevitable.

Mr Trump has been keen to reopen things as soon as possible, launching his three-phase Opening Up America Again plan last week.

He suggested some states, like Montana, Wyoming and North Dakota, could move to phase one “literally tomorrow because they’ve met all the guidelines”.

Fox News reported that the President’s daughter Ivanka and son-in-law Jared Kushner would be on the council leading the recovery effort, along with senior members of his cabinet.

“When somebody is president of the United States, the authority is total,” Mr Trump claimed earlier this month in reference to his alleged ability to supersede state authorities and ease social restrictions.

Legal experts challenged this assertion, stating that under the United States’ federalist system, it is ultimately up to governors to determine when and how to lift precautionary measures.

Mr Trump later backtracked, telling governors they “call [their] own shots” on how the country starts to recover economically from the pandemic.

Don't Miss it Coronavirus latest: Only 3% of those in infected areas have Covid-19, WHO study indicates
Up Next Coronavirus: How should we handle this crisis? | To the point