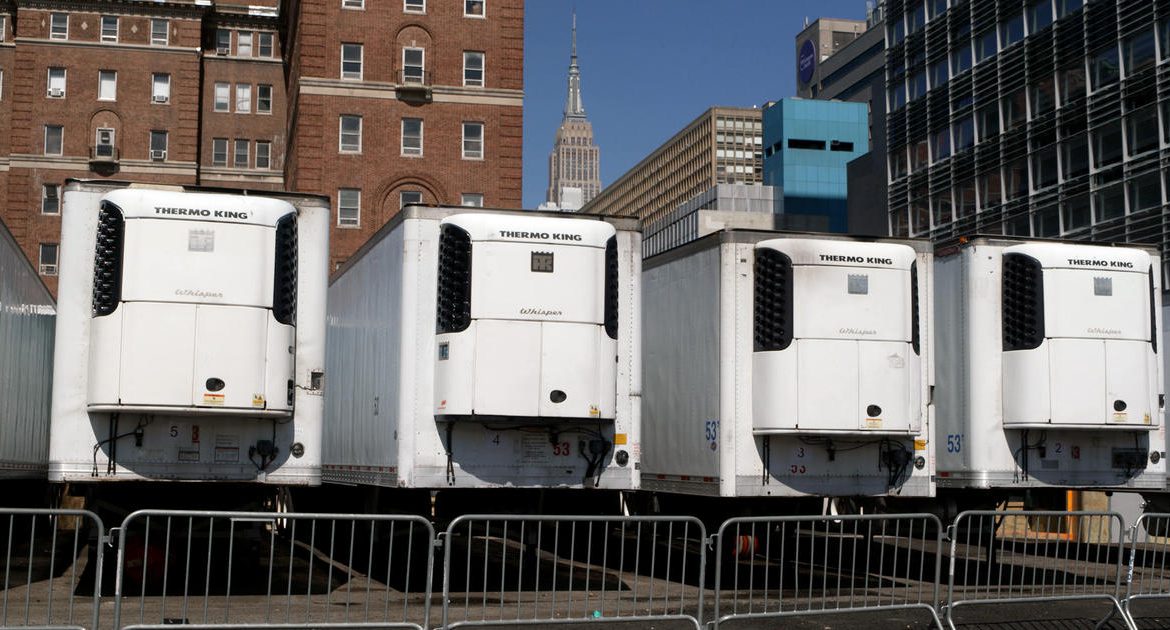 Americans are suffering in the greatest numbers of the pandemic. Known infections here are more than the next four countries combined. According to data from Johns Hopkins, only about 5% of infected Americans have died, but this weekend that left more than 37,000 dead — nearly one in four of world fatalities. Hospitals are battling in Boston, Detroit, Los Angeles, Philadelphia, Chicago, Miami and New Orleans. But nothing compares to New York City and its suburbs, which have more known infections than any other nation. New Yorkers are fighting at the extremes of life and death. Survivors are volunteering to treat the living as the city calls reinforcements to bring dignity to the dead.

Trailers like these are being used as temporary morgues in New York City.

To the icons of New York, a symbol of the pandemic has been added. More than 180 unmarked trailers, cooled inside below 40 degrees, are holding many of the city’s more than 13,000 lost souls. The trailers anticipate the dead outside 58 hospitals, including Brooklyn Hospital Center where Bob Aulicino is chief operating officer.

“We had our first trailer delivered and we were told it would fit 45 bodies,” Aulicino told correspondent Scott Pelley. “The second trailer was delivered. We were informed that we had to hire a carpenter to build shelving in that trailer to accommodate three times that amount which we did.”

“There is an image of a forklift lifting bodies into one of your trailers,” Pelley said.

“Getting the bodies into the trailer was something we had to struggle with. And hence the use of the forklift,” Aulicino said. “We’ve since built ramps. We’re able to manage that process in a much more respectful manner. It’s not a pretty picture.”

A forklift moves bodies into a trailer being used as a temporary morgue.

“We’re referred to as a safety net hospital,” Aulicino said. “Safety net hospitals, by definition, means that 50% of your patient population is on Medicaid. We serve a very poor community.”

Aulicino told Pelley, every day in his hospital, about 35 virus patients recover and around a dozen die.

“And now we’re being asked to segregate the claimed from the unclaimed bodies,” Aulicino said.

Bodies claimed by families will eventually go to overwhelmed funeral homes. Unclaimed bodies are taken by the city medical examiner.

“I think they’re preparing for the fact that they may need to prepare for mass burials of unclaimed bodies,” Aulicino said.

Burials in common graves are underway on Hart Island in Long Island Sound. It’s New York’s potter’s field where more than a million have been interred since the 19th century. In the pandemic, about 100 people are buried here a week, several times more than usual. These are the simple pine caskets of people who were unclaimed or released by families that couldn’t afford a funeral.

“It’s very difficult, very challenging. But in the same way we did 9/11, everyone– it’s all hands on deck,” Dr. Barbara Sampson said.

“We’re having to deal with things on a scale that we have never before anticipated although we have planned in the past for pandemics,” Sampson told Pelley.

“The scale and the rapidity is something that no one could’ve imagined,” Sampson said. “Not only is there an overwhelming of the health care system, there’s a overwhelming of the funeral directors and every essential service in this city and across the country.”

“Have you called in reinforcements?” Pelley asked.

“Absolutely,” Sampson said. “There is no way we could do this on our own, even with such a large agency. So, our main source of reinforcements has been the military.”

Lieutenant Shawn Lavin leads a fatality search and recovery team for the New York Air National Guard. They carry the dead for the medical examiner.

“They do the paperwork, we do the lifting,” Lavin said.

Lavin told Pelley his team is collecting between 30 to 40 bodies on average everyday.

“That’s with my team of 25 people,” Lavin said. “We started with 13 members three weeks ago. I think there’ll be close to 400 people doing what we’re doing by the end of this week.”

One reason for the increase is the number dying at home or outside hospitals, about four times the usual.

“Our initial information from my commanding officer was, we would be collecting just from hospitals,” Lavin said. “But after arriving here, we moved quickly, from hospitals into residences and long-term care facilities.”

It was a long-term care facility 60 Minutes visited with Lavin’s team and the medical examiner’s van.

“We treat every collection as it’s a possible COVID,” Lavin said.

“Tell me what the process is like,” Pelley said.

“So on a call, all of my members are donning proper PPE before they go on, so some kind of Tyvek suit, gloves, masks, eye pro,” Lavin said. “We go into a residence. Often there’s a grieving family there. We offer our condolences. We make the necessary adjustments with other furniture or anything in the room. And then we assist in kind of collecting that person who died.”

Some who have died, or fallen ill, are among those the city was counting on most.

“How is your staff doing?” Pelley asked Bob Aulicino at Brooklyn Hospital Center.

“Holding up fairly well,” Aulicino said. “We’ve lost about 30% of our employee population to the disease.”

“You’ve lost almost 1/3 of your employees to illness?” Pelley asked.

“Yes, we have,” Aulicino said. “Everybody from doctors down to housekeepers.”

“How many of your staff members have lost their lives?” Pelley asked.

“As of right now, five,” Aulicino said. “I think the one that had the biggest impact on us was one of our patient transporters. We referred to him as the mayor. Ed, I’ll give you his first name. Ed, as a patient transporter, was one who was responsible for bringing bodies from the floors to the morgue when we had patients expire. And when we had to bring Ed down to the morgue, the employees lined the route and prayed for him it was heartbreaking to say the least.”

“Your employees that are returning after being ill now have antibodies,” asked Pelley.

“They must be incredibly valuable to you,” said Pelley.

“We’re hopeful,” Aulicino said. “We’re hopeful that this might be one of the tools that might help us to defeat this virus.”

Brooklyn Hospital Center is one of many hospitals testing what’s called convalescent plasma. Plasma is the liquid that carries blood cells and antibodies made by the immune system to attack viruses. A recovered virus patient’s plasma can be transfused into a patient who’s still suffering.

“In theory, if you give a large enough dose and early enough in the disease process, the antibodies in the convalescent plasma will neutralize the viral particles in the bloodstream of that individual,” Reich said. “And that could lead to a more mild course of disease. And it could lead to fewer complications.”

“What is the history of this kind of plasma therapy?” Pelley asked Reich.

“It has been shown to be effective in certain epidemics and less effective in others,” Reich said. “For example, there was some evidence that it was a benefit for the SARS epidemic in the early part of the 2000s. And there may have been some benefit also for the Swine Flu, also known as H1N1. But it did not seem to be effective in treatment of Ebola disease.”

“At its worst, I would say, was the tightness in the chest, but manageable,” Berkman said. “Terrible, terrible headache. And just complete exhaustion.”

“My symptoms were gastrointestinal. I was vomiting quite a bit,” Berdoff said.

“Did you have respiratory symptoms?” Pelley asked.

“So I had a cough. I had a little bit of shortness of breath,” Berdoff said.

When tests show a patient eliminated the virus, and has a high level of antibodies, they can volunteer to donate.

“I figure, ‘Okay, I had this disease that everybody in the world is at risk for. I seem to have kicked it. My blood might be useful for whatever science experiments that they might be doing, whatever treatments they might be experimenting with,'” Berdoff said.

The donation is similar to giving blood, but only plasma is taken.

“So as you’re sitting there, you watch the bag filling with what I can only describe as liquid gold,” Berkman said. “I mean, literally and figuratively. The plasma is liquid gold.”

The donors do not know who receives their plasma.

“I felt if you believe you can help someone else, you would,” Berkman said. “Especially in a situation like this.”

Dr. David Reich at Mount Sinai described how his hospital selects which patients receive the plasma.

“What we’re looking for are people within the first four days of hospitalization so it’s early enough that we would expect it would be effective. And for people who are showing that they’re taking a turn for the worse,” Reich said.

It will take weeks to know whether plasma shows promise. So far, nationwide, about 500 sick patients have received plasma, a tiny start with unknown benefits.

Most of America was blindsided by the pandemic, but Shawn Lavin’s Air National Guard team has been preparing, twice a year. Working with mannequins in exercises. Ironically, the unit had long planned to be in New York in late March for a disaster drill with the medical examiner.

“We’ve been training for a decade since 2009 about how we collect fatalities in this kind of incident,” Lavin said. “But there’s really no way to prepare for what we’re currently going through. You can have all the actors you want, or all the dummies laid out on a field But when you’re actually doing it real world with grieving families it’s a much different atmosphere.”

“It’s stressful, but I think they’re rising to the challenge, and it’s some of the– like, strongest people I would ever want to work with to kind of stop your day-to-day civilian life, put on the uniform, know full well what you’re walking into, and then not complaining when you miss Easter or Passover,” Lavin said. “Just gettin’ the job done to kinda help the City of New York.”

Nearly 200 trailers are now receiving the dead in the city of New York. We noticed some are beginning to draw the sympathy of their neighbors. The city has another 90 trailers on stand-by, enough, in the estimation of Chief Medical Examiner Dr. Barbara Sampson.

“I’m a New York native,” Sampson said. “So to see this happen in– again to New York City after what we went through in 9/11, just breaks my heart. But we have our role to play, and we’re very proud to play it.

“How do you bring dignity to so many dead?” Pelley asked.

“One by one,” Sampson said. “You treat every person as an individual. Everybody who works here at OCME realizes it could be their mom or dad that is the next person who comes in and you learn that working here. But we are going to do our best to serve every single family and to the best that we are able, until we are not able to do that. But we will go down trying.”