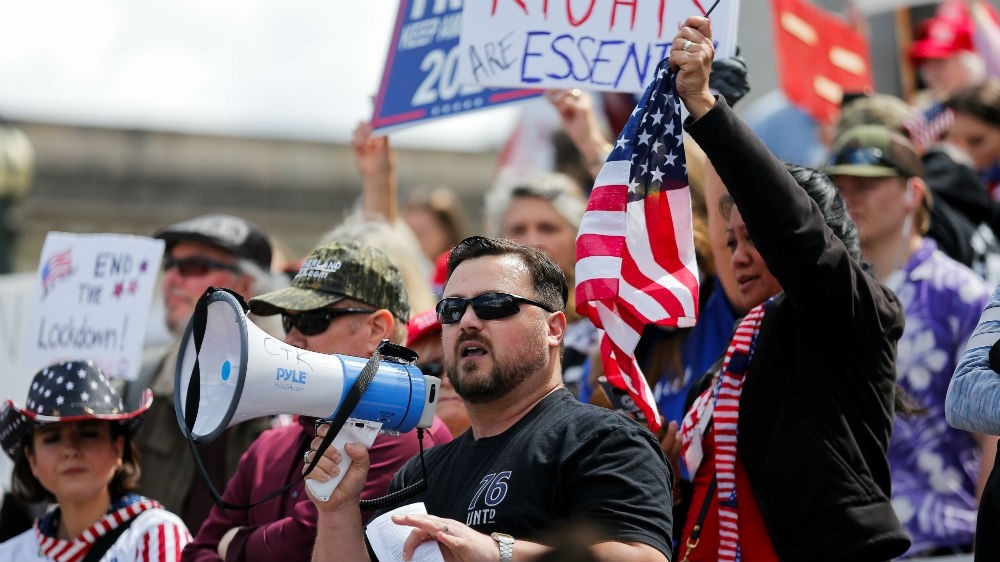 Coronavirus-related deaths in the US exceeded 40,000 with nearly half of all casualties in New York, as protests against “stay at home” orders flared in a number of states.
The number of deaths in Italy was the lowest in a week, while the pace of new infections also slowed. Spain registered its lowest daily death toll in almost a month.
New Zealand will relax some of its restrictions – among the most stringent in the world – from next Monday.
A group of more than 150 economists in Australia have urged the government to maintain social distancing restrictions as some urge a lifting of the lockdown to save the economy. “We believe a callous indifference to life is morally objectionable,” they wrote.
Globally, 2.4 million people have been diagnosed with the virus while more than 165,000 have died, according to data compiled by Johns Hopkins University. Nearly 625,000 people have recovered.

Monday, April 20
07:20 GMT – UK will review how it handled pandemic when time is right: Minister

Britain will review its approach to the coronavirus pandemic to learn what it could have done better, Culture Minister Oliver Dowden has said, following criticism that the government was too slow to react.

“When we’re dealing with an unprecedented crisis like this we’re not going to have perfect 20:20 hindsight vision on this,” he told BBC TV. “Of course we will need to look back and see the things we could have done differently.

Poland may reverse the loosening of restrictions to curb the spread of the new coronavirus if the number of new cases rises significantly, Health Minister Lukasz Szumowski has said.

“It can be always (reversed),” Szumowski told public radio, asked if the loosening of restrictions might be reversed if there was a spike in the cases of new coronavirus infections.

Poland started reopening parks and forests on Monday as the government eased a few of the restrictions that have brought daily life to a virtual standstill. On Sunday, 545 new infections were recorded in Poland, the biggest daily rise to date.

Some beaches in Australia’s Gold Coast and in Sydney have reopened as coronavirus cases continue to decline in the country.

Coolangatta and Surfers Paradise beaches reopened midday on Monday after closing on April 7, Gold Coast mayor Tom Tate said, according to 7 News. Meanwhile, Coogee, Clovelly, Maroubra and Malabar beaches on Sydney were all reopened on Monday, three weeks after they were closed to prevent the spread of the virus.

Ghana is using delivery drones from US-based startup Zipline to enable it to test people more quickly outside major cities for the novel coronavirus, the company has said.

Ghana has 834 confirmed infections and nine people have died from COVID-19, the disease the virus causes.

Zipline operated its first coronavirus test flight on April 1 and will now fly samples collected from more than 1,000 health facilities in rural areas to laboratories in the capital Accra and to Kumasi, the second-largest city.

“Using contactless drone delivery to transport COVID-19 test samples will allow the government to respond to the pandemic and help save lives more quickly,” Zipline Chief Executive Keller Rinaudo said in a release.

The UK is preparing to collect the blood from COVID-19 survivors to investigate if convalescent plasma transfusions could improve a COVID-19 patient’s speed of recovery and chances of survival.

“NHS Blood and Transplant is preparing to collect COVID-19 convalescent plasma from people who have recovered from this illness,” a spokeswoman said. “We envisage that this will be initially used in trials as a possible treatment for COVID-19.”

“If fully approved, the trials will investigate whether convalescent plasma transfusions could improve a COVID-19 patient’s speed of recovery and chances of survival,” the blood service said.

“We are working closely with the government and all relevant bodies to move through the approvals process as quickly as possible,” it said.

Doctor Judah Eastwell, a GP at St Johns Medical Centre, puts on his PPE to assess a patient in the outdoor consultation tent on April 13, 2020 in Altrincham, England [Christopher Furlong/Getty Images]

The European Union’s Economics Commissioner Paolo Gentiloni has told German magazine Der Spiegel that aid worth around 1.5 trillion euros ($1.63 trillion) could be needed to tackle the coronavirus crisis.

“The Eurogroup has now made proposals for aid worth more than 500 billion euros to finance healthcare and short-time work and to help small and medium-sized companies. That leaves at least one trillion euros. This is roughly the amount we need to be dealing with now.”

He said the funds could be raised via the EU’s next multi-annual budget.

Norway, which says it has the new coronavirus under control, has started opening up pre-schools after a month-long closure, according to the AFP news agency.

Authorities have said the reopening was possible because children have been less affected by COVID-19, although some parents have expressed reservations over the decision.

Of the new cases, 16 had come into contact with a previously confirmed case, said Taweesin Wisanuyothin, a spokesman for the government’s Centre for COVID-19 Situation Administration.

No new deaths were reported for the third consecutive day. Thailand has had a total of 47 fatalities, and 1,999 patients have recovered.

Hello, this is Joseph Stepansky in Doha taking over from my colleague Kate Mayberry .

I am now handing over the blog to my colleagues in Doha. Thank you for reading.

The United Nations Office for the Coordination of Humanitarian Affairs has issued an urgent call for $350 million to scale-up the global emergency supply system and ensure crucial assistance to tackle the coronavirus gets to the world’s poorest countries.

The system is co-ordinated by the World Food Programme and includes regional warehousing and staging hubs, shipping services, medical evacuation for front line workers, infrastructure and the construction of treatment centres.

“Every human being, in every nation around the world, is facing the same mortal threat,” the UN body said in a statement signed by other UN and humanitarian organisations. “Every step that speeds that recovery saves lives.”

05:25 GMT – China gets back to work, but caution rules in edgy Beijing

China’s getting back to work and traffic jams have reappeared on Beijing’s streets.

But life in the capital is anything but normal as Kelly Dawson reports.

The world’s biggest lockdown is saving lives in India.

But while there’s been government help for some of the poorest, and big companies will be supported by changes to financial regulations, small and medium-sized businesses are struggling.

“It’s pretty terrible,” restauranteur Arjun Chawla told Al Jazeera. “I’m trying to use the time to experiment on new dishes and have the restaurant deep-cleaned. That’s pretty much all I can do.”

04:20 GMT – New Zealand to relax lockdown from next week

New Zealand’s Prime Minister Jacinda Ardern says the country’s nationwide lockdown will be extended slightly, but relaxed from next Monday although some restrictions will remain in force.

“New Zealand will move out of Alert Level 4 lockdown at 11:59pm on Monday April 27, one week from today,” Ardern told a press conference.

The country will then remain at Alert Level 3 for two weeks, with the government deciding on the way forward on May 11.

#nzlockdown was going to end in 48 hours. To be safe, the government is extending it until after the long weekend.
Alert Level 3 is basically still Alert Level 4, but less strict and more in line with other countries’ lockdowns (eg: food delivery, takeout, online ordering, etc.) https://t.co/Lts3imGUEG

Thailand has found the largest number of nests of rare leatherback sea turtles in two decades on beaches that have been emptied of tourists by the coronavirus pandemic, environmentalists say.

The 11 turtle nests authorities have found since last November were the highest number in 20 years, said Kongkiat Kittiwatanawong, the director of the Phuket Marine Biological Center.

“This is a very good sign for us because many areas for spawning have been destroyed by humans,” he told Reuters. No such nests had been found for the previous five years.

A newly-hatched baby leatherback sea turtle makes its way to the sea for the first time in Thailand’s Phanga Nga district at the end of March. The turtles return to the same beach where they hatched to lay their eggs [Mongkhonsawat Leungvorapan/Reuters]

The Korea Centers for Disease Control and Prevention (KCDC) has just given its latest update on the coronavirus.

It’s the third day in a row where cases have been below 20, Yonhap news agency reported.

Malaysia’s parliament will sit for the first time since the coronavirus pandemic on May 18, but only for a single day and with no debates.

A power grab in Malaysia at in late February led to the resignation of Prime Minister Mahathir Mohamad and the fall of the Pakatan Harapan administration leaving the country without a government for just over a week.

The new leadership includes Mahathir’s former political party (without Mahathir) and the parties that lost to Pakatan in May 2018.

An extraordinary announcement yesterday. Parliament will restart on 18th May but…. for only one day. This will be a ceremonial event with the Yang di-Pertuan Agong delivering the King’s speech. (1/n) pic.twitter.com/4AckrqBDhA

New Zealand’s Prime Minister Jacinda Ardern is due to announce later on Monday whether to ease the lockdown imposed in late March to tackle the coronavirus.

Ardern is expected to announce her decision in a couple of hours.

The National Health Commission says there were no deaths reported on the mainland on April 19, the second consecutive day.

It also reported 12 new cases of coronaviurs – eight of them imported – as well as 49 new asymptomatic cases.

US Vice President Mike Pence says the US has sufficient testing capacity nationwide to allow any of the states to start lifting lockdown orders, providing they meet other criteria required for relaxation.

The other criteria include 14 days of declines in infections and enough hospital capacity to treat everyone who gets sick.

US President Donald Trump says the US would be willing to provide aid to Iran to help with deal with the coronavirus pandemic if Tehran requested it.

“If Iran needed aid on this, I would be willing,” he said at the daily press briefing in the White House.

A group of at least 170 economists in Australia have written to Prime Minister Scott Morrison and the country’s national cabinet to urge the government to continue social distancing measures, amid a growing debate over whether to ease the country’s lockdown to boost the economy.

“We believe a callous indifference to life is morally objectionable and that it would be a mistake to expect a premature loosening of restrictions to be beneficial to the economy and jobs, given the rapid rate of contagion,” they wrote in an open letter.

“We recognise that the measures taken to date have come at a cost to economic activity and jobs, but believe these are far outweighed by the lives saved and the avoided economic damage due to an unmitigated contagion.”

Read all the updates from yesterday (April 19) here.

Don't Miss it Coronavirus: How Eyam in Derbyshire 'self-isolated' – BBC News
Up Next Universities could lose billions from international students affected by coronavirus | The World