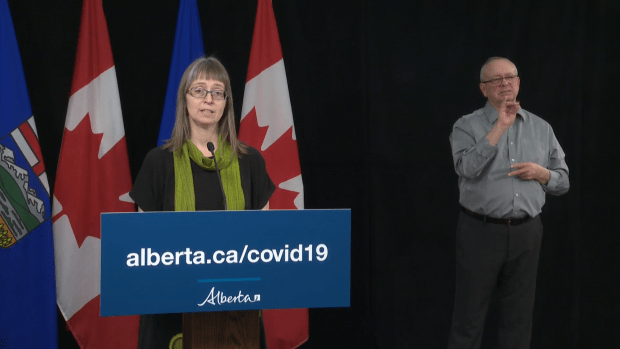 EDMONTON —
There are 105 new cases of COVID-19 in Alberta and four new deaths due to the disease, the province announced Monday.

It brings the province-wide total to 2,908 cases, with 1,230 of those patients having already recovered.

Of the 63 patients currently hospitalized in Alberta, 15 remain in the ICU.

Two of those deaths took place in long-term care sites: Manoir du Lac in McLennan, and Carewest Sarcee in Calgary.

Another victim was a worker at the Cargill meat plant in High River, where 360 people have been infected. The plant has since been temporarily closed.

That outbreak has also spread beyond the plant, with many cases identified in the Calgary zone over the weekend.

Hinshaw said many of those new people being diagnosed were likely exposed up to two weeks ago before more stringent measures were in place.

The fourth death occurred in the Edmonton zone, Hinshaw said.

“These are reminders of why we are collectively working to prevent spread of this virus,” she said.

Hinshaw touched on other outbreaks around the province, saying control measures were in place at JBS Foods, a processing plant in Brooks where 67 cases have been confirmed.

An additional case was reported in an acute care ward at Foothills Hospital in Calgary, bringing the total there to nine cases.

Hinshaw said AHS staff have now tested more than 100,000 people in Alberta, with 3,718 of those tests coming in the last 24 hours.

Before the update, Premier Jason Kenney spoke and expressed condolences for the people of Nova Scotia, who suffered the worst mass killing in Canadian history on the weekend after at least 19 lives were claimed.

“We want the people of Nova Scotia to understand that Albertans share their grief,” he said.

“As someone who grew up in a small village, there seems something particularly pernicious about this kind of massive violence in a place where violence is so rarely visited.”

A Nova Scotia flag was lowered to half-mast at the Alberta Legislature in Edmonton to mark the tragedy.

Members of the Alberta Union of Provincial Employees said the masks fell apart easily, did not fit and had a distinct odour, causing headaches and respiratory problems.

“It’s a complete and utter safety issue. Not only for us, but for our patients. If you don’t have proper mask fits that don’t work properly, you’re at a much higher risk of getting COVID,” said Dr. Micheal Chatenay, a general surgeon at the Grey Nuns Hospital in Edmonton.

The government’s pledge to send masks to other provinces in need also sparked concern that the currently used masks would be shipped out, leaving health care workers here with the newer masks they say are “shoddy” by comparison.

Shandro called those claims “untrue,” saying all of the masks sent to other provinces were sourced from manufacturers in China.

“Those same masks are also being used here in Alberta,” he said. “The masks sourced from China are safe for use in Alberta, and all other provinces. All of our PPE meets the required safety standards and all products are tested prior to being ordered, and then are inspected again before they are supplied.”

Jitendra Prasad, chief program officer of contracting, procurement and supply management for AHS, said he “appreciated” workers’ concerns but maintained the masks, brought in from two different manufacturers, met all of the government’s standards.

He suggested workers may not be as comfortable in the masks because the ones they currently use have been around for more than 20 years.

“We have already taken some of the steps to be able to improve these masks, things like working with a manufacturer to fix the nose clips, working with them to increase the size,” he said.

Prasad said the province is going through about 600,000 masks per day, but there remains an “adequate” supply of PPE in the province with 30 to 60 days of supply at any time.

Shandro said with half the deaths in Canada occurring in such facilities, stronger measures are needed to help manage the outbreaks.

An additional $24.5 million will also be provided to care home operators to address immediate issues.

As of Monday, the province reported 330 COVID-19 cases in long-term care facilities and 38 deaths.