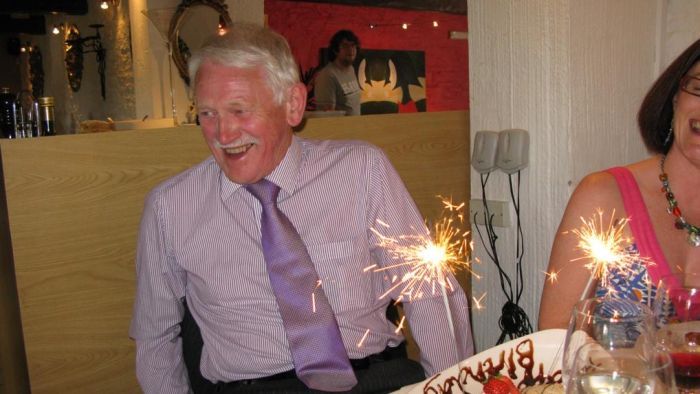 Photo:
Darrell Blakeley died of coronavirus after contracting the infection at a restaurant. (Supplied: Jonathan Blakeley)

Jonathan Blakeley doesn’t want to feel anger over the death of his father from COVID-19.

Key points:Darrell Blakeley, 88, was one of the first people to die of coronavirus in BritainWhile he was in ICU, a quarter of a million people were allowed to attend Cheltenham racesSome medical experts are questioning whether the British Government acted soon enough

He says it is not a constructive emotion.

The family think he was infected at a restaurant by someone who had arrived back from an Italian ski trip.

“That person involved, unfortunately, didn’t take it too seriously and passed the infection onto my dad,” Mr Blakeley said.

Britain ‘allowed epidemic to get out of control’

Since Mr Blakeley died, just over five weeks ago, the death toll in Britain has surpassed 16,000.

And many people are wondering how that could be.

How could it happen in a first world nation where politicians had not only been warned, but could see for themselves the tragedy unfolding in other nations in Europe?

Some medical experts are warning there is worse to come.

Anthony Costello is a former director of maternal and child health at the World Health Organisation, and a Professor at University College London’s Institute for Global Health.

He thinks the virus could ultimately claim more lives in the UK than any other European nation.

“It’s going to be very embarrassing for us,” Professor Costello told 7.30.

“We basically allowed an exponentially-rising epidemic to get out of control when if we’d acted much earlier, like the Koreans, you would have suppressed it.”

The death toll in South Korea is 236.

Your questions on coronavirus answered:
250,000 people at the races

Photo:
Part of the crowd at Cheltenham in March as coronavirus was already spreading widely around Britain. (AP: Tim Goode/PA)

While Mr Blakeley was dying in an Intensive Care Unit in a hospital in Manchester, a symbol of the Government’s inaction was in full swing in Cheltenham.

At Cheltenham races, one of the most prestigious events on the British racing calendar, a quarter of a million people packed the stands.

“We had a big horseracing event with a quarter of a million people going to it,” Mr Blakeley said.

“I just thought, ‘there’s something not right here, there’s going to be a lot of people affected by this’.”

When Ireland announced its lockdown measures on March 12, pop concerts in the UK were still being held, pubs and restaurants were still full of people.

Less than a thousand people have died in Ireland.

“I think some very difficult questions will be asked and I think there’s been a systems failure at a whole number of levels,” Professor Costello said.

He argues one of the gravest mistakes was made by Mr Johnson and his Cabinet on March 12, when it was announced contact tracing would be stopped and restricted to those who were admitted to hospital.

That was at a time when the virus was largely contained in London.

In the days that followed it spread across the nation before lockdown measures were finally announced on March 23.

A telling indicator of the Government’s approach came on March 3, from a Prime Minister who later came close to losing his own life to the virus.

At a Downing Street press conference, Mr Johnson proudly declared he had been “shaking hands continuously” at hospital that was treating coronavirus patients.

“I shook hands with everybody, you’ll be pleased to know,” he said.

“I’m glad he has made a full recovery and I wish him well,” he said.

“But in terms if his behaviour, he showed a real lack of leadership and a recklessness.

“We saw everything that was going on in Italy and we even had our Italian colleagues really warning us and saying, ‘you know this is serious, you’ve got to take action now’.”

Dr Armitage argues that those few weeks of delay resulted in the high number of fatalities.

“There was very much a feeling that it can’t come here and there’s something about Britain that makes us sort of immune to this. And I’m afraid it’s just not true,” he said.

“When the numbers started to get up and we were starting to tip-toe around the idea of a lockdown, we should have been much more decisive then.”

The British Government has rejected claims that it acted too slowly.

An official spokesman for the Prime Minister told a press briefing last week: “We believe we took the right decisions at the right point in time.”

“His leadership has been inspirational at times and I think that, actually, nothing is more off beam than the suggestion that the Prime Minister was anything other than energetic, determined, focused and strong in his leadership against this virus,” he said.

‘I’ll never know what he wanted’

Photo:
Jonathan Blakeley wasn’t allow to go back to hear the last thing his dying father wanted to say to him.

Professor Costello warns there could be up to six waves of the virus and says the Government can still learn and reduce fatalities by increasing testing and tracing, which has to happen before current social distancing measures are lifted.

“My interest, less than apportioning blame to individuals or scapegoating people, would be to ask the question, what if we do it wrong?” he said.

That is true for the country and especially for the Blakeley family, which continues to mourn the loss of Darrell.

“You’ve been a really good dad,” Jonathan Blakeley told his father during his last visit to the hospital.

After he left the room, removing the protective gear, he heard his father calling his name.

“I wasn’t allowed to go back, so I’ll never know what he wanted me for,” Mr Blakeley said regretfully.

Don't Miss it Coronavirus India Live Updates: CLAT 2020 postponed to June 21; Delhi cases reach 2,081
Up Next US pulling WHO funding 'an act of self-harm' | Interview with Gordon Brown