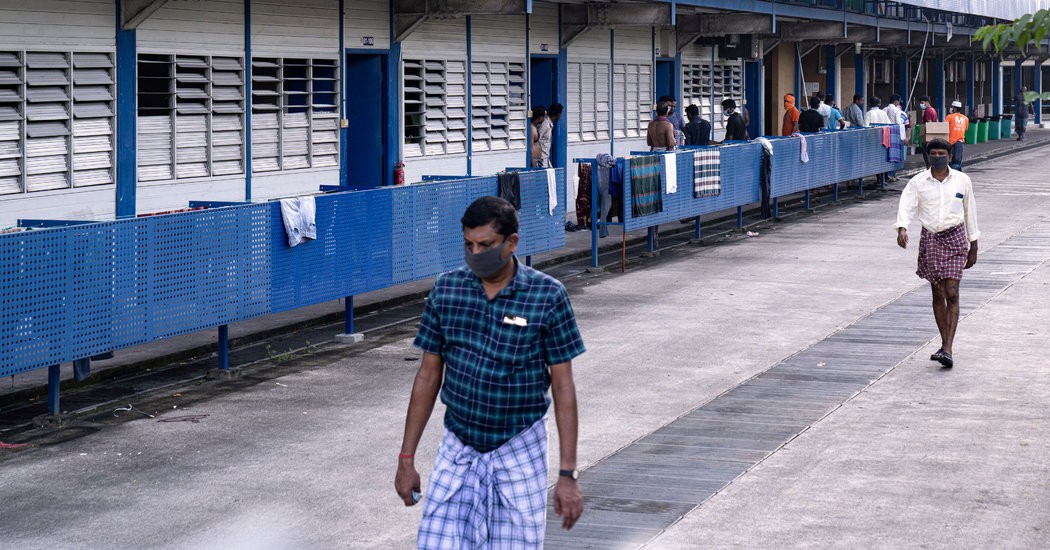 Singapore did almost everything right.

After recording its first coronavirus case on Jan. 23, the prosperous city-state meticulously traced the close contacts of every infected patient, while keeping a sense of normalcy on its streets. Borders were shut to populations likely to carry the contagion, although businesses stayed open. Ample testing and treatment were free for residents.

But over the past few days, Singapore’s coronavirus caseload has more than doubled, with more than 8,000 cases confirmed as of Monday, the highest in Southeast Asia. Most of the new infections are within crowded dormitories where migrant laborers live, unnoticed by many of the country’s richer residents and, it turns out, the government itself.

The spread of the coronavirus in this tidy city-state suggests that it might be difficult for the United States, Europe and the rest of the world to return to the way they were anytime soon, even when viral curves appear to have flattened. Although countries can closely track contacts to try to keep an outbreak at bay as Singapore did, the coronavirus is sickening, killing and spreading with each passing day, leaving scientists and political leaders racing to catch up with its relentless pace and new dangers.

If anything, the trials of this intensely urban, hyper-international country hint at a global future in which travel is taboo, borders are shut, quarantines endure and industries like tourism and entertainment are battered. Weddings, funerals and graduation parties will have to wait. Vulnerable populations, such as migrants, cannot be ignored.

“We will also more and more adapt to the new normal,” said Josip Car, a top expert in population health sciences at Nanyang Technological University in Singapore. “This is the likely future for the next 18 months minimum, this being the anticipated time to make a first vaccine available at scale.”

With cases proliferating, Singapore abandoned its strategy of maintaining a semblance of normal life. Schools were closed on April 8, and residents are now required to wear face masks in public. Hundreds of thousands of foreign workers have been quarantined in their cramped quarters, with testing among them turning up hundreds of new cases a day.

“I am very scared, of course,” said Monir, a worker from Bangladesh who is not allowed to leave his dormitory despite his need for other medical care. He declined to give his full name because his employer had not authorized him to speak to the press. “There is the Covid, and we cannot leave.”

For all of Singapore’s reputation as a garden city-state that has banished trash and cultivated a highly educated work force, the compact island nation has long depended on more than one million low-wage workers to build its skyscrapers, mop its floors and operate its bustling port. But these foreign migrants, who have little chance of acquiring Singaporean citizenship, have been left out of the country’s social safety net, even if a raft of regulations ensures minimum workplace conditions and health care coverage.

The group proved a major blind spot in the coronavirus pandemic, exposing the starkly different experiences of rich expatriates and poorer ones in a city-state where 40 percent of residents are foreign born.

While arrivals at Singapore’s climate-controlled airport, with its butterfly gardens and orchid displays, were closely monitored for the coronavirus, the contagion was spreading in government-built dormitories crowded with 200,000 foreign laborers, mostly from South Asia and China.

The first low-wage foreign workers tested positive for the coronavirus in February, and their close contacts were quarantined and tested, according to the Singaporean authorities.

Now, dozens of dormitories and lodges are suffering from outbreaks. Clusters of infections have also popped up at construction sites and an industrial park. On Monday, Singapore recorded 1,426 new cases mostly tied to the testing of migrants, a record jump in a country that a month ago had about 300 total cases.

The Singaporean authorities, it seems, failed to fully appreciate the infectiousness of the virus. Most of the cases are mild or asymptomatic and none so far have required critical care, according to the government, perhaps explaining why the spread among the foreign-worker population was not caught earlier.

Packed with up to 20 laborers in a single stifling room, these foreign-worker dormitories have been the sites of previous outbreaks of disease, like tuberculosis. Residents complain of insect infestations and plumbing woes. Three workers said their rooms had not been disinfected in the wake of the coronavirus, despite promises that conditions would improve.

“I know our foreign workers are appreciative of the efforts,” he said. “They know that they are safer in Singapore now than elsewhere, even at home.”

Because most new patients are linked to known clusters of infection, many of them among migrants, epidemiologists are hopeful that the lockdown will help tame local transmission. So far, 11 people have died in Singapore of Covid-19, the disease caused by the coronavirus, a relatively low fatality rate. Hospitals are not overwhelmed.

In a video address on April 10, delivered in three languages for the island’s multiethnic population, Prime Minister Lee Hsien Loong appealed for a sense of communal responsibility.

“It only takes a few people to let down their guard and the virus will slip through,” he said. “We need everyone to play their part.”

Other countries that managed to limit the pandemic within their borders are also struggling with recurrences. China has reported an uptick in imported infections, while increased testing has uncovered more cases in Japan.

“The reality is that Americans and Europeans will face the same issues, too,” said Teo Yik Ying, the dean of the Saw Swee Hock School of Public Health at the National University of Singapore. “My economist friends may not like this, but if trade and economic activity are resumed and people start moving without adequate measures, there will be subsequent waves of infection.”

Singaporean officials stress that once local transmission is controlled — the government is able to trace up to 4,000 contacts of patients each day — some semblance of normalcy should return to the country’s manicured streets. Schools should be able to reopen with staggered schedules. Local manufacturing can recommence, and goods and services, if not people, can flow again.

But for a country where every flight is international, the ability of a virus to bring global travel and trade to a standstill remains a shock.

Daniel David, 36, normally imports baby carrots from Australia and brussels sprouts from the Netherlands to supply hotels, restaurants and catering companies. He’s now chasing clients who have closed up shop and disappeared without paying him. Life has become hyperlocal.

“We’re used to getting things from all over the world and mixing it up,” Mr. David said. “We have to get used to doing our own thing.”

In the last week of March, passenger traffic from Changi Airport, from which more than 100 airlines once flew from Singapore to nearly 400 cities around the world, fell 98 percent from the year before. Ridership of public transportation has dropped more than 70 percent in the past week.

As visitors from China brought the virus to Singapore in January, the Singaporean authorities quickly banned flights from affected areas. The police helped find close contacts of those who tested positive. People returning from ski holidays in Europe or jaunts to New York sat out their quarantines in fancy hotels.

When a second wave of imported cases appeared from Europe and North America, Singapore barred all short-term foreign visitors. Everyone who returns to the island undergoes mandatory quarantine. For more than a week now, there has been only one imported case of the coronavirus.

But the rapid spread of the virus among foreign laborers was a clear lapse in the stringent epidemic planning, which was strengthened after Singapore was hit hard by the SARS virus in 2003.

“We’ve been warning for years that these high-density dormitories are at risk, from fire or viral transmission,” said Alex Au, the vice president of Transient Workers Count Too, a migrant rights group. “We chose as a society to go ahead with living conditions that are a risky node for infection because it kept costs down.”

Across the world, people in shared living spaces have suffered runaway spread, from nursing homes and prisons to cruise ships and aircraft carriers.

Labor experts in Singapore said that the quarantining of healthy laborers with sick ones in the past couple of weeks had probably accelerated infections. Some of those who test negative are now being separated from the sick to avoid the dormitories’ becoming viral petri dishes.

“Should standards in foreign worker dormitories be raised?” wrote Josephine Teo, the minister for manpower, in a Facebook post. “There’s no question in my mind, answer is ‘yes.’”

Tens of thousands of Singaporeans have donated funds for the well-being of migrant workers. The expectation is that the government will deliver on its vow to treat foreign workers better.

For now, though, the country is still reeling from the pandemic’s assault on some of the most defenseless people on the island.

On Monday, Singapore imposed a 14-day stay-at-home order on about 180,000 foreign construction workers and their families. Rights groups worry about how some workers who live outside government quarters will get food.

Confined to his room in a government dormitory where hundreds of foreign workers have been infected with the coronavirus, Mr. Monir said he had one wish.

Don't Miss it Coronavirus: Is there a link between the Severity of Covid-19 and Air pollution – BBC News
Up Next Coronavirus update 17 April: Australia's two major airlines receive government subsidy | ABC News

Since the virus broke out in the US more than six months ago, cases have climbed to more than 6.7…

The number of Canadians who have tested positive for the novel coronavirus grew by 865 on Saturday, while the…

Good morning. Today was meant to be the first full day of the Labour party conference in Liverpool. Now it…