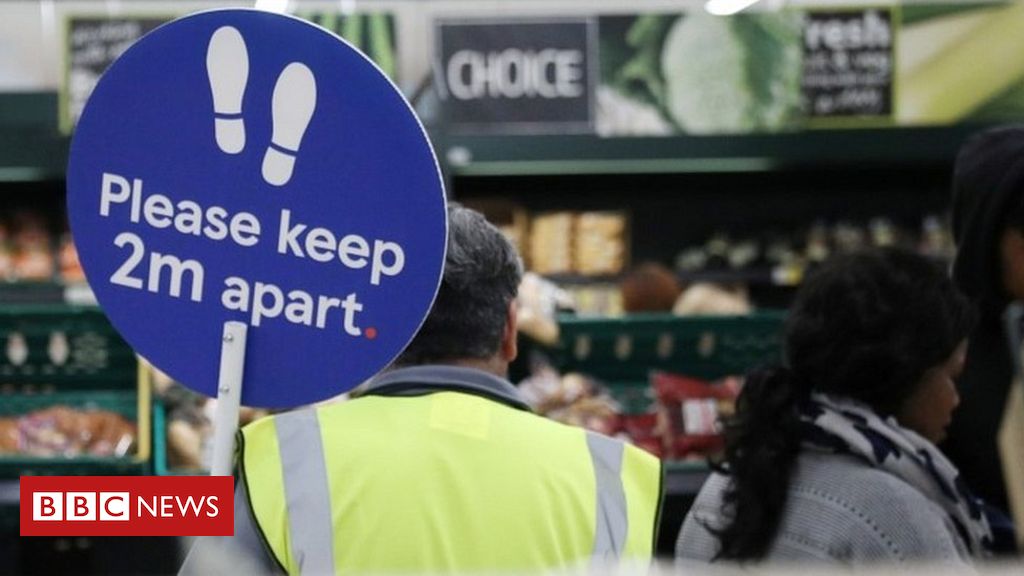 Supermarket and shop workers deserve to be paid a minimum of £10 an hour after coronavirus, a union leader has argued.

Paddy Lillis, of the Union of Shop, Distributive and Allied Workers (Usdaw), said retail “heroes” should be rewarded for risking their health to keep people “fed and watered”.

He predicted a post-crisis “day of reckoning” on pay and conditions.

But the British Retail Consortium said now was “not the right time” to ask for a wage increase.

It added that, across the retail sector, footfall – the number of people visiting shops – had suffered its “worst ever decline” in March.

The government thanked “all those working tirelessly in our supermarkets to make sure the public can continue to access essential goods”.

The average hourly wage for UK sales and customer services workers is £9.77, according to the latest Office for National Statistics data.

The figure is £15.26 across all professions and the national minimum wage for workers over the age of 25 is £8.72 per hour.

“Retail workers don’t get the respect they deserve,” said Mr Lillis. “It’s always been seen by government and local authorities and, dare I say it, even customers, that it’s a job you do until you get a ‘real job’.

“And I think there’s a day of reckoning at the end of this, where there has to be a real recognition that these low-paid workers need to be looked after and given at least £10 an hour – that’s a living wage, basically.”

Queues to get into supermarkets have become a common sight

While “non-essential” retailers have been forced to close stores because of coronavirus, supermarkets and convenience shops have remained open.

Social distancing has changed the way they operate, however, with staff and customers being told to stay at least two metres apart while inside and queuing to get in.

But unions have raised concerns that rules are not always being followed and have asked for more personal protective equipment (PPE) to be provided.

Mr Lillis told the BBC he had been assured that more PPE, including masks, was on its way.

But he said self-service checkout areas – where customers are funnelled through a narrow area and may require assistance with scanning and payment – remained a particular concern.

“Supermarket staff aren’t quite like medical workers, in that they haven’t got to touch people to do their job,” he said.

“But because of the movements of people, they’re bound to come into near contact with people quite frequently.”

Workers including till operators and shelf-stackers were suffering “anxiety and stress”, Mr Lillis said, while Usdaw had lost “a few of our members in the last week through coronavirus”.

“Retail workers are out there at the sharp end,” he added. “I call them the beating heart of communities. They’re out there making sure people get fed and watered, and that’s an essential service.”

Usdaw, which has more than 420,000 members, is surveying shop staff about their experiences with customers. Of the 7,500 to have responded so far, around 250 have described being physically assaulted.

The coronavirus lockdown has been in place for almost a month and, every Thursday evening, millions of people in the UK have taken to pavements, balconies and windows to applaud the efforts of NHS staff.

Mr Lillis said he did not think this or a similar tribute was necessary for shop staff and other non-NHS key workers, adding: “There’s no point in telling them that they’re wonderful and they’re heroes if they haven’t got the money to provide for the families.”

Tom Ironside, director of business and regulation at the British Retail Consortium, said: “In recent years retailers have worked hard to increase pay, with many going beyond the legal requirement and extending the National Living Wage rate to staff aged under 25.

“However, with many retailers struggling to maintain viability in the face of the continued crisis, it is not the right time to be adding even greater pressure to an industry that already operates on very fine margins.”

A Department for Business, Energy and Industrial Strategy spokesperson said: “We are committed to ensuring that every worker is fairly rewarded for their contribution to the economy.

“This year’s increase to the National Living Wage means that we will be putting an additional £930 into the pockets of 2.4 million of the UK’s lowest-paid workers this year.”

Don't Miss it No, 5G networks aren't to blame for coronavirus | The Drum
Up Next Coronavirus crisis: Health Minister Roger reveals one new case of COVID-19 as RPH healthcare worker tests positive