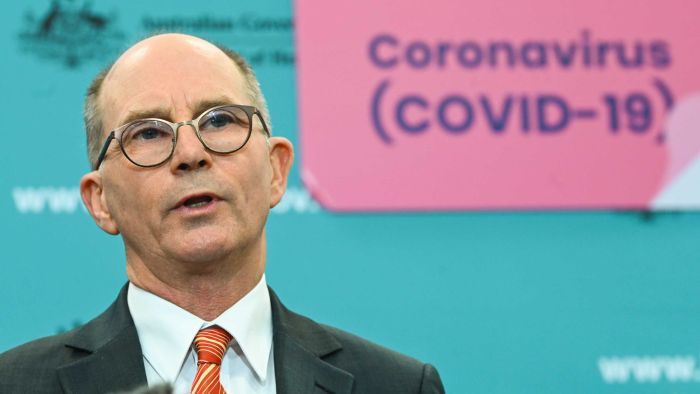 Related Story:
For David Hiscock the resumption of elective surgery has not ended the awful uncertainty

Deputy Chief Medical Officer Paul Kelly has confirmed there have been “only four new cases” of COVID-19 in Australia since yesterday afternoon.

Professor Kelly said it was a further reflection that social distancing measures imposed by the Federal Government were working, while noting there were also three deaths from the virus in the past day.

“There may be more [cases] later, but we certainly appear to be flattening that curve very successfully at the moment,” he said.

Nationally there have been 6,649 cases so far, with 74 deaths in total.

One of the three most recent deaths was at the Newmarch House aged care facility in Sydney, currently in the midst of an outbreak.

Professor Kelly said as well as the progress being made to flatten the curve and expand testing regimes, the Government was also stepping up its commitment to the third arm of its coronavirus response plan — assisting areas dealing with outbreaks.

He said specific support had been offered to Newmarch House to help while it grappled with a number of cases.

“From the Commonwealth’s point of view, we have offered unlimited workforce support,” Professor Kelly said.

“[The facility] is dealing with the difficult situation of having a large number of patients, of residents, with COVID-19.

“But also a number of staff that have had to absent themselves from work because they have been close contacts of someone with COVID-19.”

“This is a complex situation,” he said.

“Repeated testing is finding more cases, which is what we want to do, to make sure we are finding cases, even if they are asymptomatic, or mild.”

Professor Kelly said there would be a meeting between Minister for Aged Care and Senior Australians, Richard Colbeck, and advocacy networks that family members of those involved could join.

On Tuesday, the Prime Minister issued a “strong reminder” to aged care facilities that the health advice was that in-person visits could still occur, saying they were important for people’s well-being.

Professor Kelly said he agreed with the Prime Minister’s position, but suggested a different approach should be taken in situations where elderly family members or friends were still at home.

“The statement from yesterday was really reinforcing that position to aged care facilities, to think about what they have in place in terms of visits,” he said.

“To relate that back to a specific case of should grandchildren go do see their grandparents? I think that is a different situation.

“Think about the digital connections, other connections that don’t entail very close contact for the time being.”

Professor Kelly said the situation would be reviewed in a few weeks’ time and, if the news is good, could mean some of the measures are relaxed.

“Let’s see how we are in couple of weeks’ time or three weeks’ time and then there will be announcements about relaxing some of these measures and our advice,” he said.