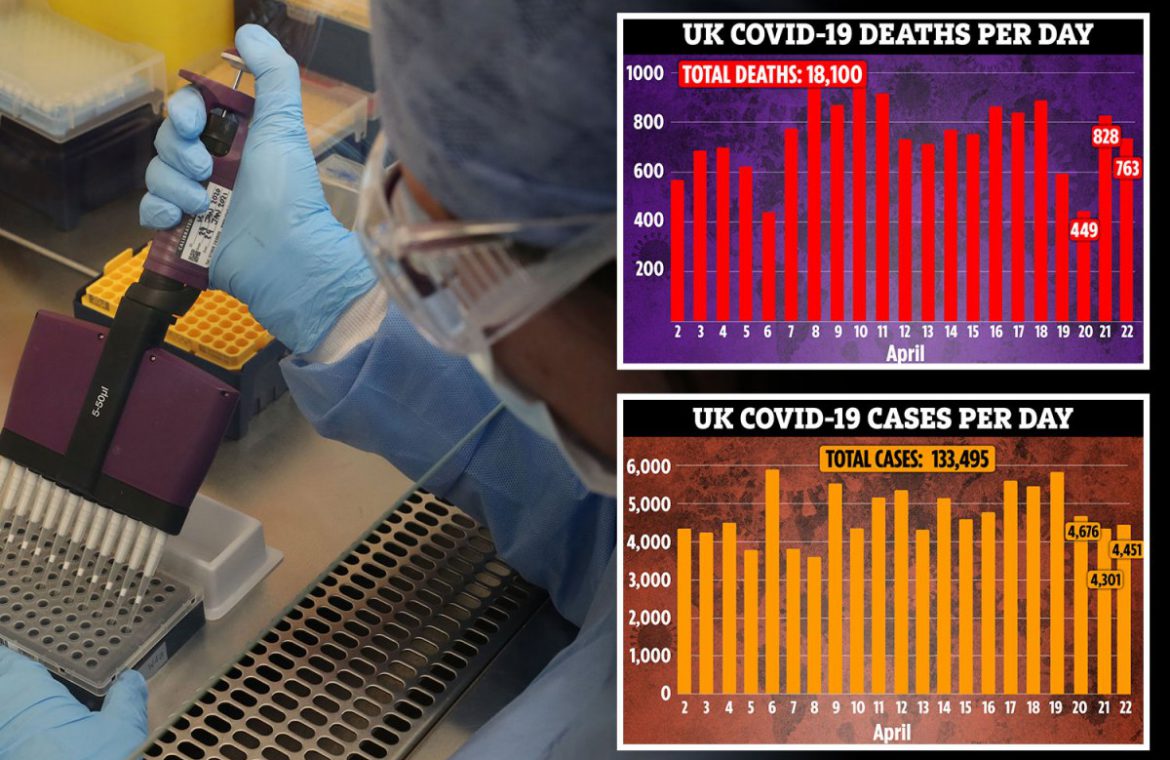 THE UK coronavirus death toll has risen to 18,100 after 763 more deaths were recorded today.

Of those who have been tested across the UK, 133,495 have tested positive for the killer bug.

In England, the number of hospital deaths rose to 16,272 today.

Of them, 26 patients (aged between 48 and 95) had no underlying health conditions.

The rise in England is lower than it was yesterday, which saw another 778 people die from the killer bug.

It is almost identical, however, to the rise recorded on the same day last week (651).

On Sunday and Monday, the spike in deaths across England was far lower, sitting at 482 and 429 respectively.

This is likely to be due to a backlog in records taken over the weekend.

A further 15 covid-19 related deaths were recorded in Wales, bringing the total number of fatalities there to 624.

Among the latest UK deaths was Julie Penfold, an “exceptional” nurse, 53, who had fostered more than 20 children in her lifetime.

She joins more than 100 frontline medics who have died from covid-19, including orthopaedic surgeon Sadeq Elhowsh, 58, – whose coffin was clapped by hundreds of NHS workers in an emotional send off.

Meanwhile, new stats suggest the UK’s death toll could be 40% higher than reported.

Figures revealed yesterday that 13,121 fatalities in England and Wales up to April 10 – compared to the 9,288 announced at the time.

The difference is down to deaths that happened outside hospital – including at care homes, hospices and private homes – as well as delays in recording fatalities.

It comes as officials revealed as many as 2,000 people may have died in care homes over the four day Easter weekend.

Many have blamed the number of deaths on a lack of PPE for frontline workers.

In yesterday’s daily coronavirus briefing, health secretary Matt Hancock said: “I am determined to get people the PPE they need.”

He added that the government was “working to improve the delivery system” and they have a “diverse range of suppliers”.

This morning, an RAF plane sent to pick up an 84-tonne consignment of PPE from Turkey arrived back in the UK – but only around half of the supplies may have been onboard.

Meanwhile, experts have warned that millions of Brits in their fifties and sixties should be isolating like older people.

Members of the public are also to be told to wear face masks at work and on public transport after scientists told ministers they could help stop the spread of the virus.

It is one measure which could be used to avoid a second wave of the virus when lockdown restrictions are eased.

Robin Shattock of Imperial College said the NHS could be hit badly if the lockdown was relaxed and Covid-19 re-emerged at the same time as the flu.

The Sun has launched an appeal to raise £1MILLION for NHS workers.

The Who Cares Wins Appeal aims to get vital support to staff in their hour of need.

The Sun is donating £50,000 and we would like YOU to help us raise a million pounds, to help THEM.

No matter how little you can spare, please donate today here

But senior government figures have braced the nation to expect a very long path out of coronavirus restrictions.

A “suck it and see” plan is now being drawn up based on scientists’ data crunching to see what restrictions to try easing first.

One senior figure told The Sun: “We will try a bit at a time, and then pause, so we can see what effect that has on the transmission rate. The pace will be very gradual”.

And Tory sources claimed Boris Johnson was resisting calls to end the lockdown early because of his own battle with the virus.

We are urging Sun readers to sign a petition calling for our NHS staff to be awarded the George Cross.

We are backing a proposal by Lord Ashcroft to honour our health heroes with the gallantry gong given for acts of bravery that did not take place in battle.

A No10 spokesman said: “The NHS is doing a fantastic job and the nation will want to find a way to say thank you when we have defeated this virus.”

SAS hero Andy McNab added: “The award of a George Cross would show an emotional appreciation.”

We are asking our readers to please sign the petition below.

A Conservative MP told The Times that fighting for his life in intensive care had changed the Prime Minister.

They said: “The Prime Minister is in a funny place, I think he’s quite frightened.

“His illness and the warning from the doctors has really hit him hard.

“To find himself floored like this has got into his head.

“He has become really tentative.”

Mr Johnson is still not working, but instead getting daily updates from his team.

Mr Johnson had stressed back in March he expected the country to be able to “turn the tide” in 12 weeks.

Now recovering at Chequers after being released from hospital a week ago, the PM is considered one of the “doves” who oppose lifting lockdown early.

‘COME ON”Gunman’ yells ‘why you scared?’ at cops after firing shots in Tupac meltdown

He is joined by Health Secretary Matt Hancock, who also contracted the virus.

The “hawks” are those more worried about the economic impact of a long-term shutdown and want to ease restrictions sooner.

These are said to include Chancellor Rishi Sunak, the Trade Secretary Liz Truss and Cabinet Office minister Michael Gove.

Don't Miss it Parishioners marking Orthodox Easter from home due to coronavirus restrictions | ABC News
Up Next Coronavirus pandemic raises question: Is it time for a basic income? – National