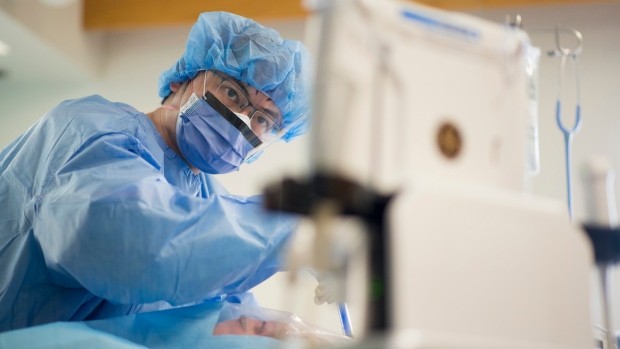 TORONTO —
More than 2,000 people have now died across Canada as a result of the pandemic, marking a grim milestone in the country’s battle against COVID-19.

The death count passed 2,000 when Ontario reported 54 deaths on Thursday – only eight days after the 1,000th death was reported. Ontario’s announcement, the first of the day, brought the national total to 2,028.

Across Canada, there are currently around 24,000 active cases of COVID-19. Almost 14,000 patients have recovered.

It has been approximately six weeks since the first Canadian death was reported on March 9 — a man in his 80s who lived in a long-term care home in British Columbia.

The very first case of COVID-19 was confirmed in Toronto on Jan. 27, just over 12 weeks ago.

Since the start of the crisis, non-essential businesses have shut down, events have been cancelled, caution tape has been strung around park equipment and millions of Canadians have filed for financial assistance. Regular life has ground to a halt as Canadians stay mostly shuttered within their homes, making sure to keep a two-metre distance between themselves and others when they venture outside.

There have been signs of hope in some provinces. The curve of the virus appears to be flattening in British Columbia as a result of lockdown and physical distancing precautions, although it is too early to loosen regulations there, officials have said. B.C. also has one of the lowest mortality rates.

In Ontario, the percentage of those who have recovered versus active cases surpassed the 50 per cent mark for the first time this week. More than 6,000 people have recovered from COVID-19 in the province.

New Brunswick has no recorded deaths yet, and has not recorded a single case of COVID-19 since April 18.

Prince Edward Island also has no recorded deaths connected to the virus. Only two cases of the province’s 26 cases thus far are still considered active, with 24 people having successfully recovered. It has been a week since they recorded a new case of COVID-19, and Premier Dennis King has said that a gradual lifting of COVID-19 precautions could potentially start as soon as May 1.

There are no deaths in Yukon, and only three of its 11 total cases are still active, with eight recoveries. All five people who caught COVID-19 in the Northwest Territories had recovered as of April 20. No COVID-19 cases have ever been reported in Nunavut.