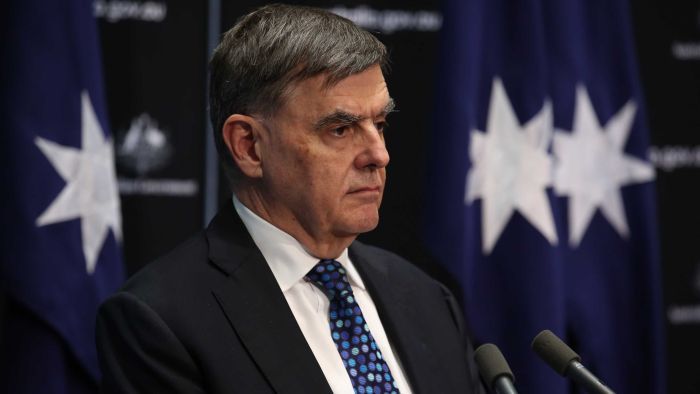 Australia’s Chief Medical Officer, Brendan Murphy, has been witness number one at a wide-ranging Senate inquiry looking at how the Government is responding to the coronavirus pandemic.

In just under two hours, he was questioned on everything from the Ruby Princess to the NRL and dropped some new information on what restrictions could be reconsidered in the near future.

Here’s what we learned from his appearance.

One thing we got greater clarity on during Professor Murphy’s evidence was the effective closure of Australia’s border.

National Cabinet has promised to review some restrictions in about three weeks’ time, but reopening the border will not be among the options discussed.

Professor Murphy said officials were looking up to three or four months ahead, but that he did not expect border changes within that timeframe.

“The international situation at the moment is such that any relaxation of border measures would be very risky,” he said.

“I wouldn’t be envisaging any material changes in that three to four months.”

Restrictions that will be discussed by the National Cabinet in coming weeks include the so-called “two-person rule”, along with potentially allowing community sports events and some retail activity.

Professor Murphy said any reduction in social-distancing measures would be dependent on beefing up the public health response, which would mean “testing like you’ve never tested before”.

“We’re in a wonderful position but there is a permanent risk of further waves and this is a highly infectious virus and it can take off fairly quickly.”

But the Chief Medical Officer also warned many other changes were still some time away.

“We certainly would not be contemplating large-scale gatherings [in the near future],” he said.

The Ruby Princess wasn’t thought to be high-risk
External Link:

Keneally Keneally tweet: According to the CMO, who is responsible for the #RubyPrincess? “@AusBorderForce certainly have had the lead role in implementing our enhanced border measures both at aeroplanes & ports… I was first made aware of the #RubyPrincess after disembarkation occurred.”

Professor Murphy was questioned by Labor senator Kristina Keneally on his role in the Ruby Princess fiasco.

Professor Murphy is the director of human biosecurity, but he repeatedly stressed that operational matters, like the intake of international passengers, was a matter for state and territory health bodies.

But he said the number of infections aboard the cruise ship was a shock to all officials.

“It had only been to New Zealand and back, and New Zealand was not seen as a high-risk country,” he said.

“I think everyone was quite surprised at the fact that there turned out to have been a significant COVID outbreak on that ship. On first principles, it wouldn’t have normally been seen to have been a particularly high-risk vessel.”

Professor Murphy also said the cluster of infections in north-west Tasmania was likely started by a Ruby Princess passenger.

Tweet: CMO Brendan Murphy says “clearly there were mistakes made” in the disembarkation of the #RubyPrincess and it’s not clear “what info was provided to whom and by whom”. But he wants to wait for outcome of judicial inquiry before saying much more.

The ABC earlier this week revealed that Australia had not run a large-scale national pandemic exercise since 2008.

That was put to Professor Murphy, who hit back angrily, saying media reports of that nature were untrue.

He then made a surprising admission.

“Senators might be pleased to learn that we did an exercise in May last year on a pandemic in a cruise ship coming into Sydney.”

Greens senator Richard Di Natale then came back to him with the obvious question of how then was the handling of the Ruby Princess such a disaster?

Professor Murphy insisted much of the responsibility for the Ruby Princess was at a state level but conceded: “Clearly there were mistakes made.”

“Everyone was doing their best in a very tricky and tense time,” he said.

Professor was worried about potential for PPE shortage

Professor Murphy was peppered with questions about Australia’s stockpiles of personal protective equipment (PPE) and the risks that could be faced by frontline health workers.

He said there was a point where he was worried about how long the stocks would last.

“[But] at no stage have we ever been in a position where I have felt any safety has been compromised by lack of PPE,” he said.

Professor Murphy said there was a range of reasons that led to a “perfect storm” for a potential shortage of PPE, including that Wuhan — the original epicentre of the coronavirus outbreak — was a major producer of this kind of equipment.

He said Australia needed to “become more self-sufficient in this area”.

Your questions on coronavirus answered:
Schools should reopen gradually

The situation around schools was, as expected, a hot topic.

Professor Murphy reiterated that the opinion of top medical advisers was that schools remained safe and should be reopened.

“The proportion of children [infected] is very small. Under 10 [years old] there is only a handful … [and there are] a small number of cases in teenagers,” Professor Murphy said.

“We all believe that schools are a safe environment to open.

“We are encouraging schools to reopen.”

He said the main risk at schools were vulnerable teachers, such as those who were older or had chronic diseases.

The NRL said yesterday the league had been given the green light from state and federal governments to restart after establishing a new set of health and biosecurity protocols.

But Professor Murphy said the country’s top health emergency body had not been involved in granting any permission.

“There hasn’t been a formal process of seeking approval from the Australian Health Protection Principal Committee [AHPPC],” he said.

Professor Murphy said responsibility was largely with the states and territories but said: “I would be hopeful that decisions around starting codes would have National Cabinet approval.”

The NRL says clubs will be able to resume training from May 4 and the plan was for the league to recommence on May 28.

What the experts are saying about coronavirus:
Golf and fishing rules decided by states

There has been much confusion around the country about why some things are allowed in one state or territory but not another.

One senator cited the example of not being able to play golf unless she headed down the road and over the border.

Professor Murphy had a slight chuckle as he said these were differences at “the margins” and that that kind of advice was not coming from a federal level.

“Essentially we have had a very consistent social-distancing message, which is [to] stay at home unless you have to go to work if you can’t work from home, have to go to school … go to the shops for essential goods, go to the doctor or go outside for personal exercise,” he said.

“AHPPC has not made specific advice on whether two people playing golf is safe or otherwise.

“They’re differences at the margins.”

Don't Miss it Coronavirus hero nurse killed in Canada’s deadliest mass shooting was pregnant – World News
Up Next When should coronavirus lockdowns be lifted? | COVID-19 Special