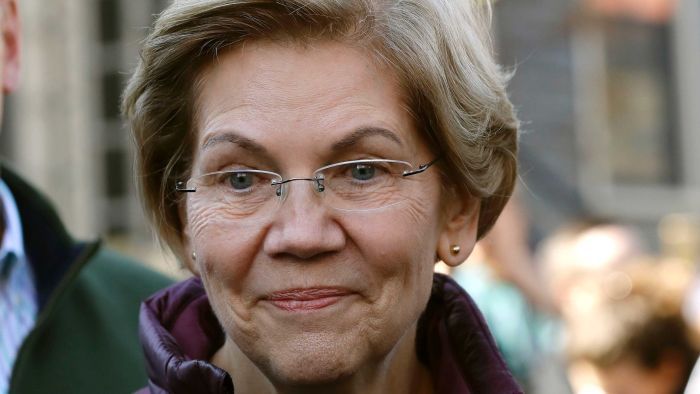 United States Senator Elizabeth Warren announces her brother has died after testing positive for coronavirus, while the pandemic has left 26 million Americans out of work.

This story is being updated regularly throughout Friday. You can also stay informed with the latest episode of the Coronacast podcast.

Mr Herring, 86, known as Don Reed, was an Air Force pilot who flew hundreds of combat missions in Vietnam.

“He was charming and funny, a natural leader,” Senator Warren wrote on Twitter.

“What made him extra special was his smile — quick and crooked, it always seemed to generate its own light, one that lit up everyone around him.”

Senator Warren has been a prominent critic of Republican President Donald Trump’s response to the coronavirus outbreak, which has killed more than 47,000 Americans.

She is widely seen as a top contender for the vice-presidential pick for presumptive Democratic presidential nominee Joe Biden, who is challenging Mr Trump in November’s election.

Half of Europe’s deaths in aged care homes

Photo:
The WHO estimate that half of Europe’s COVID-19 deaths are in aged care homes. (AP: Bernat Armangue, file)

The World Health Organization has said up to half of all coronavirus deaths across Europe have been in aged care homes, calling it an “unimaginable tragedy”.

In a press briefing on Thursday (local time), WHO Europe director Dr Hans Kluge said a “deeply concerning picture” was emerging of the impact of COVID-19 on long-term homes for the elderly, where care has “often been notoriously neglected”.

Dr Kluge said health workers in such facilities were often overworked and underpaid and called for them to be given more protective gear and support, describing them as the “unsung heroes” of the pandemic.

He also noted that about half of the global burden of COVID-19 cases and deaths are in Europe and that in the last week, numbers have increased in the east, citing Russia, Turkey and Ukraine.

What the experts are saying about coronavirus:
One in six American workers unemployed

Photo:
More than 26 million Americans are out of work during the coronavirus pandemic. (David Grunfeld/The Advocate via AP)

More than 4.4 million laid-off workers applied for US unemployment benefits last week as job cuts escalated across an economy that remains all but shut down, the Government said on Thursday [local time].

Roughly 26 million people have now filed for jobless aid in the five weeks since the coronavirus outbreak began forcing millions of employers to close their doors.

About one in six American workers have lost their jobs in the past five weeks, by far the worst string of layoffs on record. Economists have forecast that the unemployment rate for April could go as high as 20 per cent.

The enormous magnitude of job cuts has plunged the US economy into the worst economic crisis since the Great Depression of the 1930s. Some economists say the nation’s output could shrink by twice the amount that it did during the Great Recession, which ended in 2009.

The economic consequences of the virus-related shutdowns have sparked angry protests in several state capitals from crowds insisting that businesses be allowed to reopen.

The malaria drug has been touted as a “game changer” by US President Donald Trump in treating patients with COVID-19, but recent research — which has not yet been peer reviewed — found no benefit.

A US-based study at veterans’ hospitals actually found more deaths among those given the drug, compared to patients who received standard care.

In a statement posted to Twitter, Mr Palmer said: “The Palmer Foundation has donated the drug to the Australian Government to be placed on the National Medical Stockpile so it may be made available free to all Australians.”

Mr Palmer did also point out in a media release from The Palmer Foundation that if not found to be useful in treating COVID-19 the drugs could still be used to treat “malaria, lupus and auto-immune diseases” and that Australians who need it will not have difficulty acquiring the drug.

Mr Trump has stockpiled 29 million doses of hydroxychloroquine as a potential treatment, but trials in Sweden, France and Brazil were called off after patients had negative reactions.

Confirmed cases of coronavirus have passed 100,000 in Turkey, with almost 2,500 deaths.

The country now has the sixth highest number of cases, behind the US, Spain, Italy, France, Germany and the UK.

Turkey has become the epicentre of COVID-19 in the Middle East, ahead of Iran, with 87,000 cases.

Both have eclipsed China’s caseload, although there are lingering questions surrounding China’s official figures.

Photo:
The WHO warns deaths from malaria could double in Sub-Saharan Africa as authorities focus on combatting the COVID-19 pandemic. (AAP: Dave Hunt)

The number of deaths caused by malaria in Sub-Saharan Africa could double to 769,000 this year, as efforts to curb the disease are disrupted by the COVID-19 pandemic, the World Health Organization [WHO] warned on Thursday.

WHO Regional Director for Africa Dr Matshidiso Moeti said a recent analysis found that if mosquito net distribution stopped and case management reduces, “malaria deaths in sub-Saharan Africa could double in comparison to 2018”.

“This would be the highest number of deaths seen in the region since the year 2000,” she said.

She pointed to statistics from Africa’s Ebola outbreak showing that more people died of other diseases, including malaria, than from Ebola itself, due to lack of access to treatment.

“Let us not repeat that again with COVID-19,” she said.

US may never restore WHO funding, Pompeo says

Photo:
US Secretary of State Mike Pompeo said the US may never restore WHO funding. (Reuters: Yara Nardi)

US Secretary of State Mike Pompeo said a fundamental reform of the World Health Organization was needed and that the United States, the WHO’s biggest donor, may never restore funding to the UN body.

Mr Pompeo told Fox News late on Wednesday [local time] there needed to be “a structural fix of the WHO” to correct its “shortcomings”.

Asked if he was not ruling out a change in leadership of the WHO, Mr Pompeo replied: “Even more than that, it may be the case that the United States can never return to underwriting, having US taxpayer dollars go to the WHO.”

The WHO has denied the Trump administration’s charges and China insists it has been transparent and open.

Democrats have accused the Trump administration of trying to “scapegoat” the WHO to distract from its handling of the coronavirus outbreak.