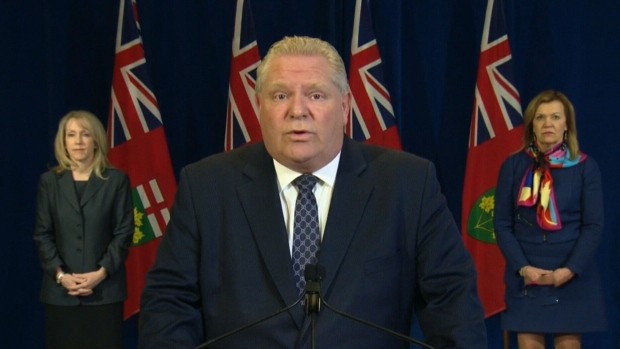 OTTAWA —
Ontario Premier Doug Ford has clarified his suggestion that the Victoria Day long weekend might be a target date for reopening the province’s economy.

“That is absolutely not going to happen,” Ford told a news conference Wednesday afternoon when asked again specifically if the May long weekend was a target date. “There’s never going to be one date that we just open up the economy. We’re going to open it up with a trickle, and just let it flow from there.”

Earlier on Wednesday, speaking on Newstalk 580 CFRA’s “The Morning Rush with Bill Carroll” in Ottawa, Ford said he and his team are working on a framework on how to reopen the economy safely in the coming weeks and months and suggested the Victoria Day long weekend may be a target.

Carroll asked Ford whether he sees Ontarians having more freedom to be social by the May long weekend than they do now.

“If we continue down the road we’re going publicly, yes, we can see things loosening up a bit,” Ford said. “People want hope. Everyone has a concern, no matter how old they are, they want to get out there.”

He’s previously been leery about putting a date on when the reopening plan will begin to unfold.

Ford has said he’s been facing increasing pressure from businesses and even members of his own family to get people back to work, especially in light of new modelling released this week that suggests Ontario is in better shape than first predicted.

He tells CFRA his priority is protecting health and safety above all else.

“Our biggest fear, and the public’s biggest fear, is a spike again and it comes back for a second wave. That’s what keeps me up at night.”

The state of emergency in Ontario is in effect until May 12. Victoria Day is May 18 this year.

According to the most recent figures from the province, there have been 12,245 cases of COVID-19 in Ontario since the pandemic began in mid-March. Of those, 6,221 are considered resolved. 659 people in Ontario have died from COVID-19.

The increase in cases reported Wednesday marks the lowest growth rate in Ontario in weeks, and the number of resolved cases in the provice is above 50 per cent for the first time.

Ford says he’s dealing with “two worlds” right now: the general public, which is faring well, and long-term care homes, which are seeing the worst effects of the virus.

At least 400 COVID-19 deaths in Ontario are linked to long-term care settings.

In Ottawa, outbreaks in long-term care homes and hospitals account for a quarter of all cases to date and two thirds of all deaths to date.

The province recently announced a plan to test everyone living and working in all 630 long-term care homes in Ontario.

“We’re throwing every resource we have at it,” Ford said about the situation in long-term care homes. “Unfortunately, there will still be people passing away in long-term care. It’s a terrible, terrible virus that attacks the most vulnerable and that’s why it’s so important, if you have a loved one, I hate to say it, just keep ’em locked down and self-isolating as long as possible.”

Schools reopening later in the process

Ford wasn’t prepared to call the school year finished, but said schools will likely be among the last things to reopen as COVID-19 restrictions are peeled away.

“I think it’ll probably be later on,” he said. “Our biggest fear is this spreading within our schools. I know our kids are resilient but, still, our number one concern is protecting our kids out there.”

Education Minister Stephen Lecce has said he will have an update on the state of the province’s school system this month.

“I don’t think it’ll be the final decision,” Ford said, “but it’ll give people a little more certainty about where we’re going.”

Ford says he knows people want to see signs of hope in this crisis, but his main goal remains the safety of Ontarians.

“There’s no one out there who wants to turn this economy on more than I do but, saying that, I have to make sure we protect the health and welfare of the people in Ontario.”

With files from The Canadian Press.