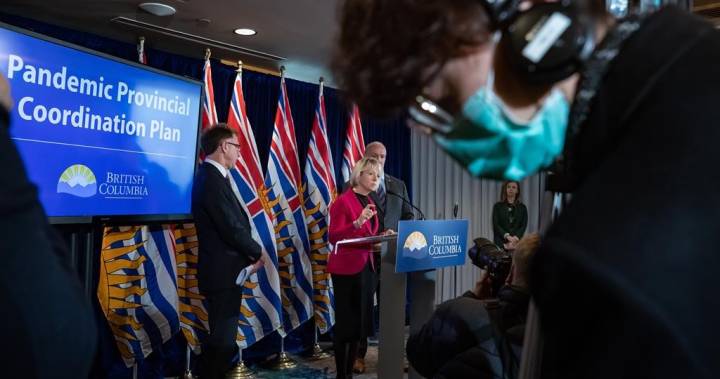 The first case was identified on Wednesday, and a Fraser Health investigation is now underway.

The workers are among 29 new COVID-19 cases Henry announced Thursday, along with four new deaths.

The province has recorded 94 deaths and 1,824 cases in total.

Henry said there were also two new outbreaks in acute care facilities, one at Lions Gate Hospital in North Vancouver and one at Ridge Meadows Hospital in Maple Ridge.

Earlier this week, B.C. reported an outbreak of the virus at the United Poultry facility in East Vancouver, a sister plant to the Superior facility, where 29 people have now tested positive. Officials said employees had been coming to work while sick.

“There was … people working in both places or at least some movement of people between both places,” said Henry.

“They are under a different management structure, and I know the investigation is ongoing, and it does look like there’s likely to be others in the new facility who are also ill.”

1:22
Where did the second cluster of COVID-19 cases at B.C. poultry plant come from?

Where did the second cluster of COVID-19 cases at B.C. poultry plant come from?

Henry said Thursday that the province had learned from meat processing outbreaks in Alberta, and that she was issuing a new public health order which would apply to the agriculture, aquaculture and forestry industries.

Along with guidance for employers, the order will require the presence of an infection control officer at work sites.

Timeline to reopen the economy

But Henry said the spate of new outbreaks in B.C. showed that the province was not yet ready for similar measures.

She said B.C. would not begin to relax the most stringent pandemic restrictions until the province could not just flatten the curve of new infections, but bend it downward significantly.

“Obviously I would like it to be zero [new cases] for a number of days, that is the aim, the goal, and ideally zero for many weeks,” she said.

“But I do recognize that we have a little bit of room to … ease within that if we are able to do it safely.”

Once some restrictions are lifted, she said people will need to make tough decisions about how small to keep their circles of social and economic interaction to prevent a runaway spike in new cases.

“It is a very careful balance,” she said. “It’s going to be difficult to find it.”