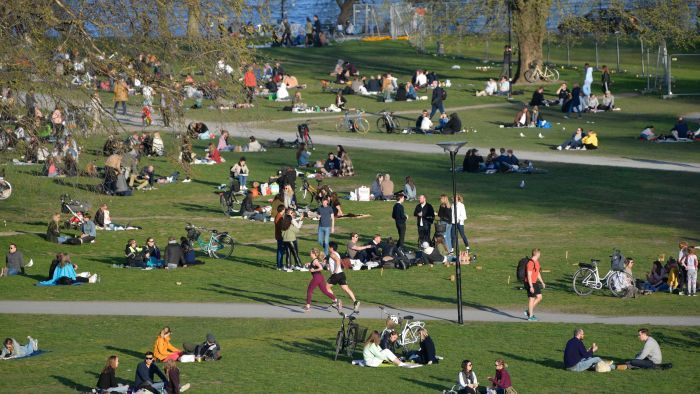 Photo:
Sweden’s social-distancing rules are not nearly as strict as those in other countries. (TT via AP: Anders Wiklund)

Spring is in the air in sunny Stockholm, where life for most people has continued largely uninterrupted despite the global coronavirus pandemic.

Key points:Schools, restaurants, bars and even nightclubs remain open in SwedenOfficials say Stockholm is nearing herd immunity, but the elderly have sufferedSweden has had 16,755 confirmed infections, with 2,021 deaths

With a response focused on individuals taking personal responsibility for stopping the spread — as opposed to the Government enforcing a lot of special laws or regulations — Sweden has remained more or less open throughout the crisis.

People who can work from home are being encouraged to do so, nursing homes are not accepting visitors, and universities have moved to online learning.

Yet bars, restaurants and gyms have been able to continue operating, provided they follow Sweden’s relatively less strict physical-distancing measures, and schools have also kept their doors open.

Photo:
You can still go out for drinks in the sun with friends in Sweden’s capital. (TT via AP: Anders Wiklund)

“Sooner or later people are going to go out anyway.”

And while it’s a bit early to tell, it could be paying off. Mr Tegnell has said that the capital Stockholm, the country’s outbreak epicentre, “might” reach herd immunity in May.

But officials are warning this doesn’t mean a potentially early end to the pandemic for Sweden, and the country’s approach is not without its critics at home and abroad.

Sweden has had 16,755 confirmed cases of COVID-19, with 2,021 deaths: neighbouring Norway and Denmark, which have taken more stringent approaches, have just a fraction of those numbers.

Really? Herd immunity in May?

Photo:
Restaurants are still open, but patrons must be seated and spread out. (AP: David Keyton, file)

According to official modelling, it is possible — but it is just modelling at this stage, and it would only be for the capital region.

Mr Tegnell, the head of Sweden’s Public Health Agency, told US media this week that cases in the capital had plateaued, and that the effects of herd immunity were already apparent.

“In a few weeks’ time we might reach herd immunity and we believe that is why we’re seeing a slow decline in cases, in spite of [testing for coronavirus] more and more,” he told CNBC.

Herd immunity occurs when a large percentage of a population gets infected, recovers, and subsequently becomes immune to further infection.

This decreases the amount of new hosts available to the virus, and the outbreak eventually ends.

However, the process of getting there inevitably puts strain on countries’ health systems, and runs the risk of creating an uncontrolled epidemic that may lead to many otherwise preventable deaths.

Mathematical modelling from Swedish health officials predicts that around 26 per cent of people in the Stockholm region (or around 690,000 people) will be infected, or will have been previously infected, by May 1.

This is based on the estimation that for every confirmed case of coronavirus in the region, there are at least 75 undetected cases.

“We don’t know that much about immunity yet, we will know more as more people are tested for antibodies, but also if more accounts of reinfection are reported,” he told a press conference last night.

What does that change?

Photo:
Stockholm could reach herd immunity soon, but the rest of the country is not there yet. (TT via AP: Anders Wiklund)

In the immediate term, officials are hoping the prospect of herd immunity doesn’t change anything: they want the public to continue social distancing, with a focus on protecting the vulnerable and those over the age of 70 from infection.

Mr Wallensten pointed out that the modelling only applied to the Stockholm region, and most people would remain vulnerable for some time to come.

So don’t expect Sweden’s capital to become a virus-free utopia — with the rest of Europe’s major cities still under lockdown — any time soon.

“Many more Stockholmers will be protected than in countries where not so many have been exposed, but I’m not sure that will affect how we live in the short term,” he said.

“Even though maybe 30 per cent or 23 per cent, like this model said, of Stockholmers have been infected in May, it will still mean the majority have not been infected.”

And while Sweden may be in a plateau phase right now, with the daily number of new cases appearing to stabilise, Mr Wallensten said it was not time to scale back Sweden’s comparatively loose coronavirus measures.

Gatherings of more than 50 people are not allowed, and while table service is continuing at bars and restaurants, managers are expected to keep patrons at a safe distance from one another.

Universities and high schools (from years 10 to 12) are running classes online, as teenagers and young adults can look after themselves, while primary and middle schools are remaining open.

This theoretically allows all parents who can’t work from home to continue working, including vital health workers.

Photo:
Compared to the lockdowns across most of Europe, things have hardly changed in Sweden. (TT News Agency via AP: Anders Wiklund)

“Even if the number of [infection] cases doesn’t go up, there is a high load in healthcare, and the longer that holds up, the more that depletes resources,” Mr Wallensten said.

“In that way we’re always reaching an all-the-more critical level until that [load] begins to reduce, and we are not there yet.”

But why is Sweden’s death rate so high?

Sweden has so far reported 2,021 deaths from coronavirus, compared to 193 in neighbouring Norway, 394 in Denmark and 172 in Finland.

These numbers are still below what other countries in Europe are experiencing, but considering Sweden’s immediate neighbours have had limited death tolls, questions have been raised about the effectiveness of its strategy.

Many of Sweden’s official deaths have been recorded in nursing homes. The US and many countries in Europe only count deaths in hospital towards their official death tolls, which may be part of why Sweden’s comparatively high toll stands out.

However, this is not to say the elderly have not been disproportionately affected in Sweden, despite efforts to protect the vulnerable.

Photo:
While the young can still picnic in the parks, Sweden’s elderly are being urged to avoid going outside. (TT via AP: Janerik Henriksson)

People aged 70 and above make up the majority of those who have died from COVID-19 in Sweden: 1,757 people within that age bracket have died so far, according to Sweden’s Public Health Agency.

Other Nordic countries, which have had stricter lockdown measures, have not had the same high death figures among elderly people, and have seen lower infection rates and deaths overall.

Chief epidemiologist Anders Tegnell told Swedish media earlier this month that Norway in particular had done a better job testing workers in its nursing homes, and had seen fewer deaths as a result.

Is the strategy popular in Sweden?

If opinion polls are anything to go by, the Swedish Government’s handling of the crisis appears to be popular among the public.

Approval for the leading Social Democratic Party has risen for the second month in a row, with the party now having the support of 30.4 per cent of Swedish voters, according to a poll from national broadcaster SVT and the analysis firm Novus.

The pollsters attributed this rise to Prime Minister Stefan Lofven’s handling of the pandemic, and high levels of confidence in government agencies.

Sweden Democrats, the country’s populist right-wing party, had the highest level of support among voters in polls taken prior to the crisis. Now the party is sitting in second place at 19.7 per cent.

However, Mr Lofven and Mr Tegnell’s strategy has come under fire, including from a group of more than 2,000 concerned scientists, academics and medical professionals.

Late last month, they called on officials to put in place stricter measures to contain the virus. This advice has so far not been heeded.

One expert critical of the approach told the ABC it was too late at this point anyway: “Game over for Stockholm, the infection is too spread by now, [we] can only wait for consequences.”

Time will tell whether Sweden’s unique approach to the pandemic stands out for the right or the wrong reasons.