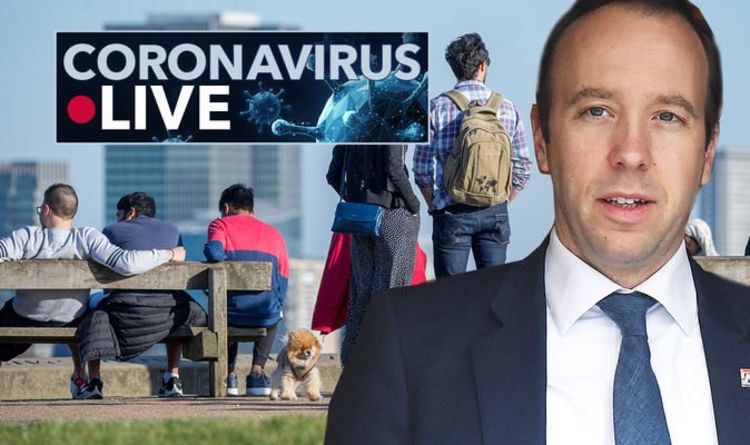 The arrangement could see families reunite with relatives and close friends in “clusters” for the first time in weeks. It would give household units an opportunity to share childcare and would permit people to gather for meals and other activities at home. A Whitehall source told the Daily Mail: “If we can find a way to allow a bit more flexibility without risking transmission of the disease running higher then we will do it.”

On Friday Health Secretary Matt Hancock said ministers would not be prepared to ease the lockdown until they were certain a second wave of coronavirus was unlikely.

Speaking to BBC Radio Four’s Today programme, Mr Hancock said: “I understand those voices who are saying we should move sooner but that is not something we are going to do.”

His comments come as the public have been urged to stay home ahead of the fifth weekend since the Government implemented the lockdown.

Photos this week showed crowds flocking to parks and seafronts to enjoy the high temperatures.

Forecasters have predicted warm conditions for most of the country over the weekend, prompting concerns about the “danger” that people may defy the restrictions on movement which began on March 23.

On Saturday she is expected to condemn those ignoring the ban on travel.

SEE BELOW FOR LIVE UPDATES:

11.27am update: ‘No evidence’ that recovered COVID-19 patients cannot be reinfected – WHO

The World Health Organization (WHO) has said that there was currently “no evidence” that people who have recovered from COVID-19 and have antibodies are protected from a second coronavirus infection.

In a scientific brief, the United Nations agency warned governments against issuing “immunity passports” or “risk-free certificates” to people who have been infected as their accuracy could not be guaranteed.

The practice could actually increase the risks of continued spread as people who have recovered may ignore advice about taking standard precautions against the virus, it said.

“Some governments have suggested that the detection of antibodies to the SARS-CoV-2, the virus that causes COVID-19, could serve as the basis for an ‘immunity passport’ or ‘risk-free certificate’ that would enable individuals to travel or to return to work assuming that they are protected against re-infection,” the WHO said.

“There is currently no evidence that people who have recovered from COVID-19 and have antibodies are protected from a second infection.”

He said: “We need to understand whether Mr Cummings was contributing to the debate or influencing the debate.”

He said there has been “key questions” from the medicine and scientific communities about the timing of the Government’s decisions.

He called on the Government to be “completely transparent” with the public and publish the minutes from the meetings.

Mr Ashworth said “presumably, some members of SAGE were uncomfortable” as otherwise the report about Mr Cumming’s attendance would not have been leaked.

10.18am update: No10 denies claims Cummings influenced SAGE decisions when he attended meetings

And all slots for drive through tests in England, Wales and Northern Ireland have been taken.

The site had to close to new applicants within hours of launching on Friday, after 46,000 people tried to access it. Some 16,000 bookings were made.

The Government’s online portal to book coronavirus tests has reopened this morning.

As well as England, there is now the option to book tests in Scotland, Northern Ireland and Wales.

The tests will be released in batches throughout the day, Downing Street has said.

Germany’s confirmed coronavirus cases increased by 2,055 to 152,438, data from the Robert Koch Institute (RKI) for infectious diseases showed on Saturday – a second day of deceleration after three days of acceleration in new infections.

On Friday confirmed coronavirus cases had increased by 2,337.

Labour has called for greater transparency about Sage – which is helping shape the Government’s response to the coronavirus outbreak – after it emerged Boris Johnson’s top aide Dominic Cummings had been attending meetings.

The Government’s Scientific Advisory Group for Emergencies (Sage) is a forum for “thorough scientific discussion amongst the experts”, the medical director of NHS England has said.

Professor Stephen Powis told the BBC Radio 4 Today programme: “My experience of Sage is that it is a forum for scientific discussion.

“I have been confident that what happens at Sage is a scientific discussion involving the scientists and the experts who are members of Sage.