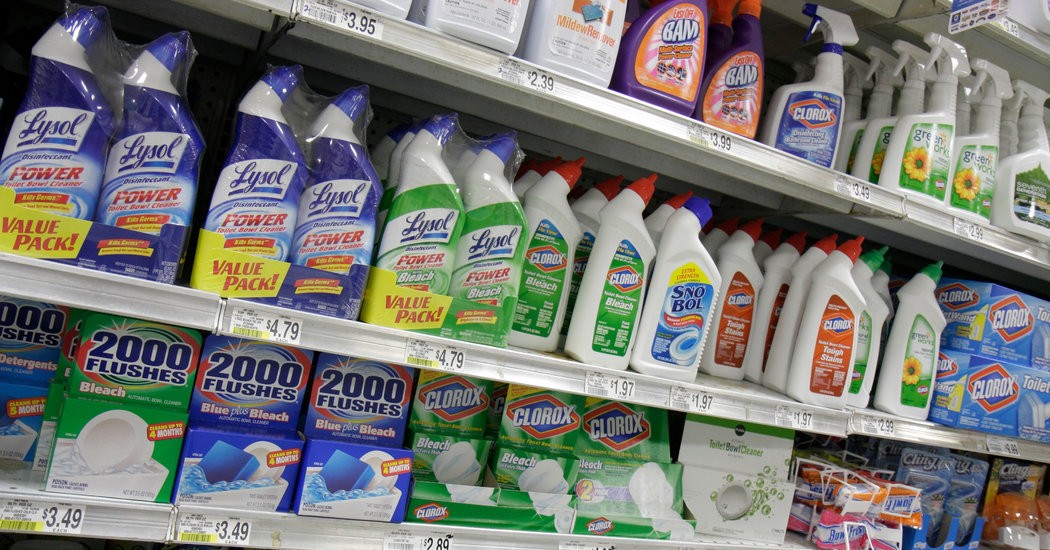 WASHINGTON — In Maryland, so many callers flooded a health hotline with questions that the state’s Emergency Management Agency had to issue a warning that “under no circumstances” should any disinfectant be taken to treat the coronavirus. In Washington State, officials urged people not to consume laundry detergent capsules. Across the country on Friday, health professionals sounded the alarm.

Injecting bleach or highly concentrated rubbing alcohol “causes massive organ damage and the blood cells in the body to basically burst,” Dr. Diane P. Calello, the medical director of the New Jersey Poison Information and Education System, said in an interview. “It can definitely be a fatal event.”

Even the makers of Clorox and Lysol pleaded with Americans not to inject or ingest their products.

The frantic reaction was prompted by President Trump’s suggestion on Thursday at a White House briefing that an “injection inside” the human body with a disinfectant like bleach or isopropyl alcohol could help combat the virus.

“And then I see the disinfectant, where it knocks it out in a minute,” Mr. Trump said after a presentation from William N. Bryan, an acting under secretary for science at the Department of Homeland Security, detailed the virus’s possible susceptibility to bleach and alcohol.

“One minute,” the president said. “And is there a way we can do something like that, by injection inside or almost a cleaning? Because you see it gets in the lungs and it does a tremendous number on the lungs. So it would be interesting to check that.”

Dr. Deborah L. Birx, the White House’s coronavirus response coordinator, was sitting to the side in the White House briefing room, blinking hard and looking at the floor as he spoke. Later, Mr. Trump asked her if she knew about “the heat and the light” as a potential cure.

“Not as a treatment,” Dr. Birx said, adding, “I haven’t seen heat or light —” before the president cut her off.

Mr. Trump’s remarks caused an immediate uproar, and the White House spent much of Friday trying to walk them back. Also Friday, the Food and Drug Administration warned that hydroxychloroquine and chloroquine, two drugs that the president has repeatedly recommended in treating the coronavirus, can cause dangerous abnormalities in heart rhythm in coronavirus patients and has resulted in some deaths.

The F.D.A. said the drugs should be used only in clinical trials or hospitals where patients can be closely monitored for heart problems.

“Leave it to the media to irresponsibly take President Trump out of context and run with negative headlines,” Kayleigh McEnany, the new White House press secretary, said in a statement criticizing the coverage of Thursday night’s briefing.

But the president later undermined her argument by insisting that his question to Mr. Bryan in fact had been an elaborate prank that he had engineered to trick reporters.

“I was asking a question sarcastically to reporters like you just to see what would happen,” Mr. Trump said on Friday to journalists gathered in the Oval Office. The president said he had posed his theory on cleaning the body with disinfectant “in the form of a sarcastic question to a reporter,” which also was not true — he had said it unprompted to Mr. Bryan.

With more questions likely at the Friday briefing, Vice President Mike Pence, the head of the White House coronavirus task force, abruptly ended it shortly after it began.

Several White House officials said they shared the view that Mr. Trump had been taken out of context, even as they acknowledged that his comments were problematic. They noted that the president had later directed the same comments to Dr. Birx, and suggested them as a course of study, as opposed to a recommendation of a course of action for the American public.

But they acknowledged that Mr. Trump’s delivery was too sloppy for a president in the middle of managing the response to a pandemic that has killed over 45,000 Americans. Some said it was one of the worst days in one of the worst weeks of his presidency.

Others inside the administration raised questions about why Mr. Bryan, whose background is not in health or science, had been invited to deliver a presentation. Mr. Bryan, whose expertise is in energy infrastructure and security, is serving in an acting capacity as the head of the department’s science and technology directorate.

Mr. Bryan served 17 years in the Army, followed by yearslong stints as a civil servant at the Defense and Energy Departments. The latter role led to a whistle-blower complaint accusing him, in part, of manipulating government policy to further his personal financial interests, and then lying to Congress about those interests.

Mr. Bryan was invited by the vice president’s office to coronavirus task force meetings on Wednesday and Thursday to talk about a study that his department had done relating to heat and the conditions in which the coronavirus can thrive or be dampened. On Thursday, Mr. Bryan presented a graphic to the room, according to four people briefed on the events.

Mr. Pence’s advisers wanted Mr. Bryan to brief the news media on his findings, but several West Wing staff members objected, partly because they were concerned the information had not been verified.

Before Mr. Bryan took the lectern in the White House Briefing Room, Dr. Birx and Dr. Anthony S. Fauci, a member of the coronavirus task force, made a few revisions to his presentation, officials said.

As he listened to Mr. Bryan, the president became increasingly excited, and also felt the need to demonstrate his own understanding of science, according to three of the advisers. So Mr. Trump went ahead with his theories about the chemicals.

Later in the briefing, Phil Rucker, a reporter for The Washington Post, asked the president why he had had that discussion because “people tuning into these briefings, they want to get information and guidance and want to know what to do — they’re not looking for a rumor.”

The backlash was swift. A host of corporations, doctors and government officials quickly stepped forward to issue an identical warning: Cleaning products are extremely dangerous to ingest — potentially deadly — and no one should do so.

Speaker Nancy Pelosi ridiculed Mr. Trump’s comments as she criticized his priorities for coronavirus relief. “The president is asking people to inject Lysol into their lungs,” she said, calling it an indication that “Republicans reject science.”

And Joseph R. Biden Jr., the Democratic presidential front-runner, added his own criticism.

“I can’t believe I have to say this,” Mr. Biden posted on Twitter on Friday afternoon, “but please don’t drink bleach.”

Dr. Jerome M. Adams, the surgeon general, also issued a warning through his Twitter feed — the closest he has come so far to walking back the president’s words.

“A reminder to all Americans- PLEASE always talk to your health provider first before administering any treatment/ medication to yourself or a loved one,” Dr. Adams said. “Your safety is paramount, and doctors and nurses are have years of training to recommend what’s safe and effective.”

Mr. Trump’s hopeful comments about disinfectant use coincided with an alarming rise in accidents with household cleaning products in recent weeks, according to doctors who monitor activity at poison call centers. On Monday, the Centers for Disease Control and Prevention reported a growing number of calls to poison control centers and a significant increase in accidental exposures to household cleaners and disinfectants.

The F.D.A. has moved to tamp down on merchants online that have encouraged the ingestion of products made with disinfectants and cleaning agents, including chlorine dioxide, a compound commonly used as a bleach. The products have found favor with conspiracy theorists and fringe activists online who peddle chlorine dioxide as “Magical Mineral Solution,” or M.M.S.

One such activist, Mark Grenon, claimed after the president’s briefing that “Trump has got the M.M.S. and all the info,” according to The Guardian. Mr. Grenon did not reply to an email seeking comment, nor did the White House. On Friday, a person familiar with the situation said senior administration officials were not familiar with Mr. Grenon or his letter.

Social media platforms have also moved to filter out the circulation of junk science and bad information online, using disinfectants as a prime example. Last month, Mark Zuckerberg, the chief executive of Facebook, specifically mentioned a bleach “cure” as an example of “misinformation that has imminent risk of danger.”

“Things like, ‘You can cure this by drinking bleach,’” he said. “I mean, that’s just in a different class.”

A spokesman for Twitter said on Friday that the president’s statements did “not violate our Covid-19 misinformation policy.”

Don't Miss it COVID-19 recovery plan begins with 2-household ‘bubbles’ but mass gatherings may wait a year
Up Next Satirical shock jock Campbell Parkes rails against the coronavirus lockdown | 7.30