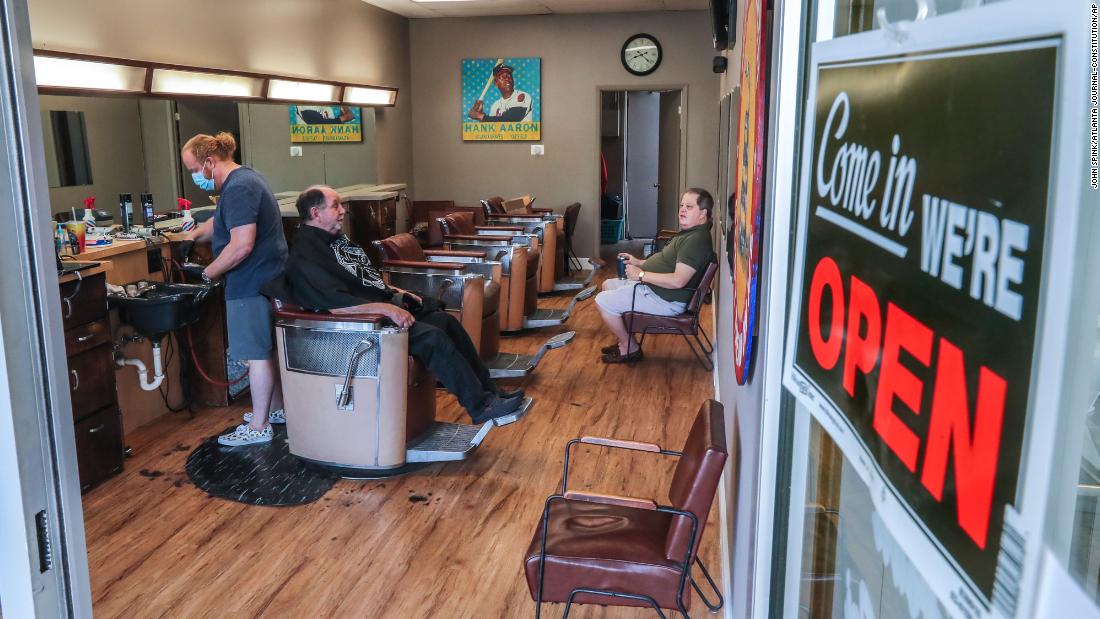 Such reopenings go against against a University of Washington model suggesting that no state should open their economies before May 1 — and many should wait much longer. The university’s modeling has been frequently cited by the White House coronavirus task force.

Some states have already started reopening. Hawaii has reopened beaches for visitors to fish and exercise, but loitering will not be allowed, Gov. David Ige said Saturday.

And Alaska has allowed many salons and restaurants to open, though they can’t exceed 25% capacity.

Georgia allowed some businesses to reopen with certain guidelines Friday, including places where clients or workers are in close proximity such as barber shops, hair salons, tattoo parlors, gyms and bowling alleys.

In New York — the hardest-hit US city — the goal is get people back to work, Mayor Bill de Blasio said.

De Blasio announced the formation of a “Fair Recovery Task Force, which will deliver a preliminary road map by June 1 for the state’s recovery from the economic effects of the pandemic.

Gov. Andrew Cuomo said New York state has seen a rise in domestic violence, alcoholism, drug use and demands for mental health treatment. But the earliest the state will begin its first phase of reopening is May 15, and then only in regions that have seen a 14-day decline in hospitalizations, he said.

If everything goes well, Cuomo said he expects to see parts of upstate New York open first, and the construction and manufacturing sectors open first with “certain precautions.”

New Jersey, the only other state beside New York with more than 100,000 cases, is “still a number of weeks away” from reopening, Gov. Phil Murphy told NBC’s “Meet the Press” on Sunday.

Some mayors say their cities shouldn’t reopen yet because a surge in coronavirus cases would set the economy back further.

Atlanta Mayor Keisha Lance Bottoms tweeted a chart Saturday showing the numbers of coronavirus cases and deaths in the area.

“If you’re getting your nails done right now, please share these noon numbers with your manicurist #StayHomeGeorgia,” the mayor tweeted.

In the nearby suburb of Brookhaven, Mayor John Ernst said he would rather nonessential businesses wait until Georgia reaches a 14-day downward trend in cases.

“Even the (business owners) who open up say, ‘I don’t know if I’m doing the right thing,'” Ernst said.

In California, while surrounding counties opened their beaches for the weekend, Los Angeles Mayor Eric Garcetti said the city would not follow suit. He urged residents to stay inside.

“We can’t let one weekend reverse a month of work that you have invested in,” he said.

In Colorado, Gov. Jared Polis announced he is letting stay-at-home orders expire Sunday but urged residents to stay home “as much as possible.”

Polis said he hopes to allow offices to reopen May 4 with reduced workforce, and while he is worried about a second spike later this year, his administration is targeting a policy of 60% to 65% “social distancing from the way people used to live,” he told CNN.

Asked if he’s worried his state’s plan could cost lives, Polis said, “What matters a lot more than the date that the stay-at-home order ends is what we do going forward.”

“Stay in place and know that none of the locations that were closed during the order will open up,” Hancock said.

Fauci says ‘we’re not there yet’ with testing

A key component to safely reopening the economy is adequate levels of testing, health officials have said.

Dr. Anthony Fauci, a member of the White House Coronavirus Task Force, says the US should double the number of diagnostic testing for coronavirus over the next several weeks.

“We’re getting better and better at it as the weeks go by, but we are not in a situation where we say we’re exactly where we want to be with regard to testing,” said Fauci, the director of the National Institute of Allergy and Infectious Diseases.

“I think we’re going to get there, but we’re not there yet.”

The US needs to “have enough tests to respond to the outbreaks that will inevitably occur as you try and ease your way back into the different phases,” Fauci said.

The type of tests are important, too, Dr. Deborah Birx of the White House coronavirus task force told “Meet the Press” on Sunday. She said health experts need to be able to conduct tests for antigens — substances that stimulate the body’s immune response — “rather than constantly trying to detect the actual live virus or the viral particles itself.”

“We have to have a breakthrough,” she said. “This RNA testing will carry us certainly through the spring and summer, but we need to have a huge technology breakthrough — and we’re working on that at the same time.”

It’s not just testing the US needs more of, Fauci said. Contact tracing, identification and isolation of those infected are also key elements to helping slow the outbreak.

The World Health Organization said it’s too early to tell if those who have recovered from coronavirus are immune from a second infection.WHO is reviewing evidence on antibody responses to the novel coronavirus, it said. Most studies show that people who have “recovered from infection have antibodies to the virus,” a scientific brief says.

As of Friday, no study has “evaluated whether the presence of antibodies to (the virus) confers immunity to subsequent infection by this virus in humans,” the WHO brief says.

WHO later tweeted a clarification: “We expect that most people who are infected with #COVID19 will develop an antibody response that will provide some level of protection.”

It’s not clear how long antibodies might protect against subsequent infection, Birx said.

The US Food and Drug Administration has authorized three coronavirus antibody tests, bringing the total number of FDA-authorized tests to seven.

The tests were approved under emergency-use authorizations, a lower regulatory standard used when the FDA believes a test’s benefits could outweigh any risks.

Don't Miss it The coronavirus crisis is creating unusual allegiances as Australia fights to make it to the other side
Up Next Coronavirus: Trump retweets call for health adviser Anthony Fauci to be sacked | ABC News