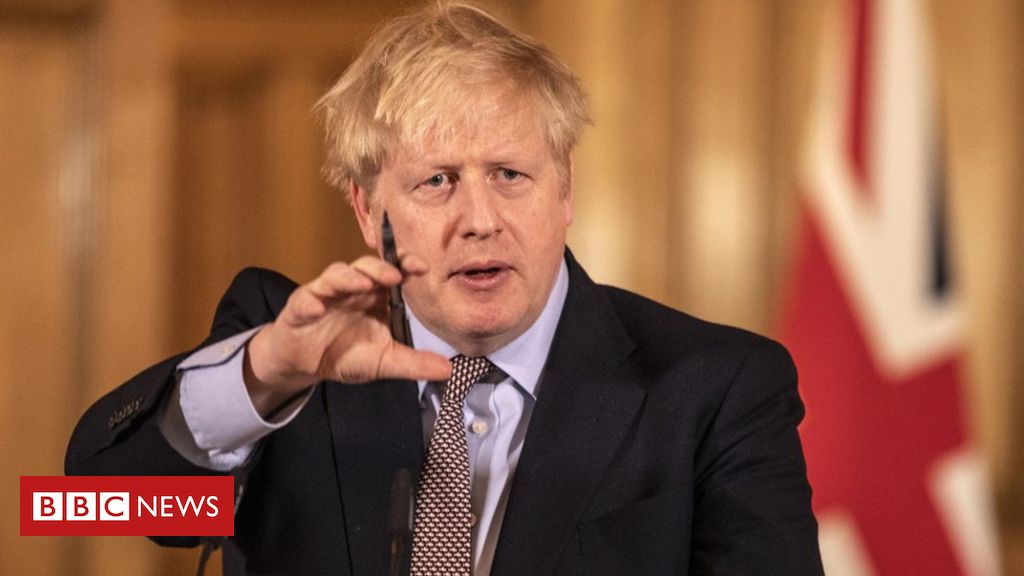 Boris Johnson has returned to Downing Street to take charge of the UK’s response to the coronavirus outbreak.

The prime minister will chair the regular morning cabinet meeting on Covid-19 before holding talks with senior ministers and officials.

Foreign Secretary Dominic Raab, who has been standing in for the PM, said Mr Johnson was “raring to go”.

He arrived back at No 10 on Sunday evening amid mounting pressure from Tory MPs to begin lifting the lockdown.

The latest official figures bring the total number of deaths in UK hospital to 20,732, after a further 413 were announced on Sunday.

It is a month since Mr Johnson was diagnosed with the virus.

He spent a week in St Thomas’ Hospital in central London, including three nights in intensive care, after being admitted on 5 April.

Mr Johnson has not been doing any official government work during his convalescence at his country residence, Chequers, although last week he did speak to the Queen and US President Donald Trump, as well as meeting senior ministers.

He will now resume full-time duties, although it is unclear at this stage whether he will lead Monday’s press briefing.

BBC political correspondent Iain Watson said the one thing the prime minister did not want to do was take any action which might risk a second wave of infections.

He said Mr Johnson was facing “competing pressures” between the health of the nation on one hand, and, on the other, concerns about the effect of the lockdown on the economy – including from his own MPs.

Sir Graham Brady, chairman of the Conservative backbench 1922 committee, told BBC Radio 4’s Westminster Hour that there was a limit to how long people would tolerate restrictions, especially if they seemed illogical.

Strict limits on daily life – such as requiring people to stay at home, shutting many businesses and preventing gatherings of more than two people – were introduced on 23 March, as the government tried to limit the spread of the virus.

Ministers are required by law to assess whether the rules are working, based on expert advice, every three weeks. The next review is due on 7 May.

Mr Raab said on Sunday that social distancing would remain for “some time” in the UK.

Rather than a complete lifting of all measures, he said the country would end up “moving to a new normal”.

He suggested social distancing measures already being seen in food shops and other businesses that have remained operating could also be expanded to non-essential businesses if they were to reopen.

Labour’s Rachel Reeves said the UK should “potentially” be following the example of countries like Belgium, Germany and Denmark which have already signalled partial re-opening of some businesses and schools.

“We want to work with the government in bringing forward a plan and getting it right,” she said.

Scientists advising the government have warned any relaxation risks a renewed flare-up just as the numbers of patients in hospital with the disease is beginning to fall.

NHS England medical director Professor Stephen Powis told the daily No 10 briefing: “My fear is that those curves won’t continue to be on a downward trend, but will start to go on an upward trend.

“We are not at a point where any of us can be absolutely confident that that’s not going to be the case.”

A further 413 coronavirus deaths in UK hospitals were announced on Sunday – the lowest number that has been reported in April.

However, experts have previously warned against over-interpreting daily statistics, as they often reflect reporting delays, particularly over weekends – so do not relate directly to the number of deaths that occurred on a certain day.

Meanwhile, Mr Raab insisted the government remained “on track” to hit its target of carrying out 100,000 tests for coronavirus per day by Thursday.

There were 29,058 tests carried out on Saturday, far short of the government’s target – which it aimed to achieve by the end of April.

Environment Secretary George Eustice said the capacity for testing had risen to more than 50,000 a day, adding that “significant numbers” of people in care homes were obtaining tests.

Since Friday, millions of key workers and people they live with have been able to book appointments online to be tested.

However, the British Medical Association said testing for healthcare staff should not be on a “first come, first served” basis after slots ran out for the third day in a row.

Appointments to visit a test site in England ran out about seven hours after the website opened on Sunday, much later than in the previous two days.

Those too ill to travel should also be able to order home kits – although numbers are limited. On Sunday morning home kits were no longer available within 15 minutes of the site reopening at 08:00 BST.

Don't Miss it Hay fever or coronavirus: The symptoms compared – BBC News
Up Next Coronavirus: New Zealanders allowed to surf, hike for first time in more than a month – National