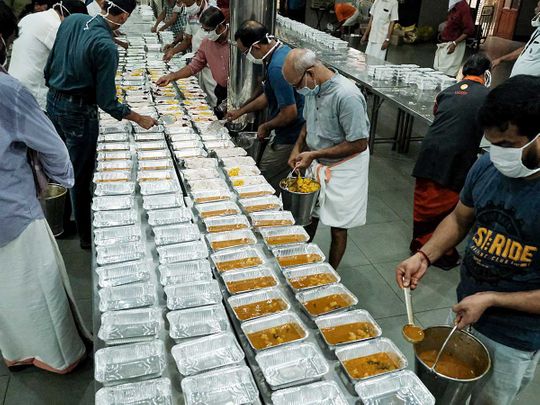 Volunteers pack food packets for migrant labourers on the third day of the lockdown announced due to coronavirus, in Kochi on Friday.
Image Credit: ANI

State leaders empowered by the people clearly have a huge investment in ensuring that they address perhaps the biggest public health emergency of our lifetime.
Despite the Centre practically choking off funds, the chief fighters are an excellent endorsement of India’s federal model and the connect mass leaders have with their people.

As India fights the global pandemic of the coronavirus, the chief fighters are a bunch of state chief ministers who are giving it all they have and leading from the front.

The chief fighters have one thing in common – they are all mass leaders. And they make a convincing case for federalism.

Communication is the most critical thing as people’s panic escalates in a lockdown. Thackeray has been prompt in shutting down communal rumours. He has threatened rumour mongers with the law and “my police” against the communal virus of fake news.

While Maharashtra has a huge number of cases, Thackeray has been following the model of testing more which is the only realistic way of tackling the pandemic.

Vijayan, whose exemplary handling has got India talking about the “Kerala model,” is an experienced chief minister and had earlier handled the Nipah virus crisis in 2018 in his state.

But the remarkable effort of Kerala to get the midday meal scheme home delivered is exemplary.

Vijayan has also aced communication without creating panic. And in fact, Kerala was the first to react to the coronavirus by trying a mini lockdown to stop the spread of contagion. Kerala is an oasis of governance with an experienced administration ensuring care.

Ashok Gehlot, multiple term chief minister of Rajasthan, has pioneered the “Bhilwara model” of turning a hot spot into a near virus free zone with a ruthless model of containment. Gehlot has done two things: sealing off areas quickly and seamlessly and scaling up the preparations of hospital and quarantine zones.

Navin Patnaik, again multiple term chief minister of Odisha, has been the first to declare critical care workers the real heroes and is ensuring state funerals for doctors who died fighting the pandemic.

All the chief fighters are trying to ensure that the support chain is not broken and migrants stranded in their states manage to go home. Baghel, despite leading a poor state like Chhattisgarh, has ensured that he continues the rights-based administration that won him the election.

State leaders empowered by the people clearly have a huge investment in ensuring that they address perhaps the biggest public health emergency of our lifetime. And they have idiosyncratic ways of doing it. Take Banerjee for example: from using chalk and drawing circles to tell people the exact dimensions of social distancing to appointing a task force with Nobel winner Abhijit Banerjee, Mamata has been doing it her way.

Despite the Centre practically choking off funds, the chief fighters are an excellent endorsement of India’s federal model and the connect mass leaders have with their people.

Don't Miss it Australian scientists racing to find effective treatments for COVID-19 | ABC News
Up Next Italy to loosen lockdown from May 4: Coronavirus live updates | News