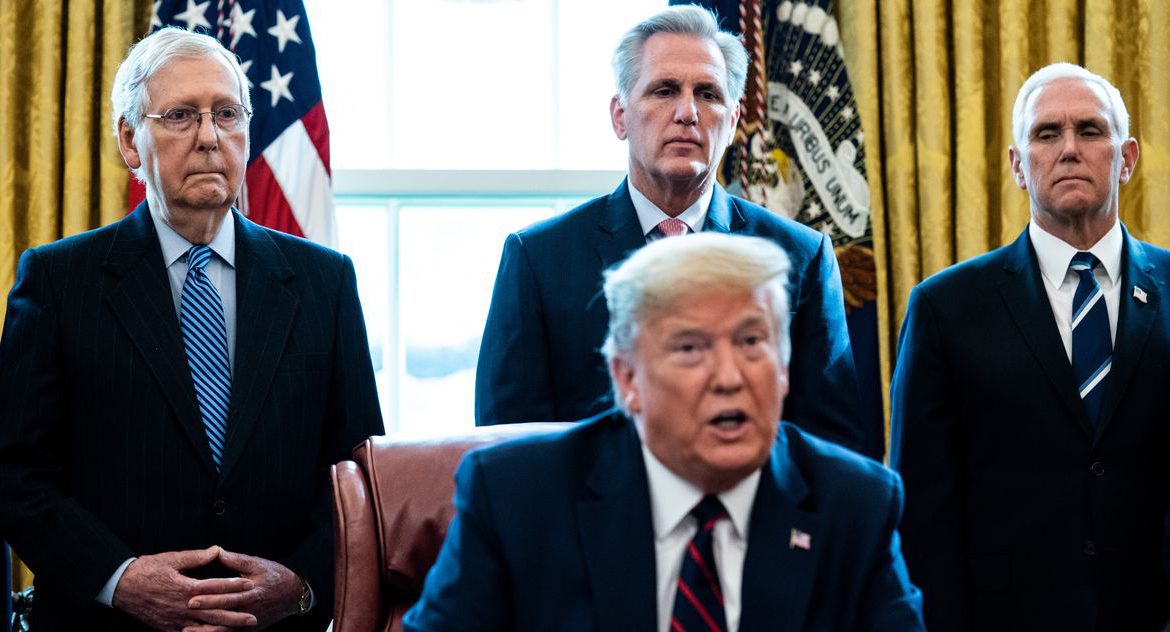 Late Friday, Politico obtained an internal GOP memo circulated by the National Republican Senatorial Committee summarizing the party’s message on the coronavirus. Its main theme will come as little surprise to anybody who has heard a Republican sound bite: It’s all China’s fault. Its most interesting passage is its explanation of what the theme omits: a positive defense of President Trump’s response to the pandemic. “Don’t defend Trump, other than the China Travel Ban — attack China,” the memo urges.

Trump has been attempting to focus on this theme for weeks, with mixed results. The argument has numerous glaring flaws. First, even if we accept the premise that coronavirus management is primarily a matter of standing up to China, Trump has done a miserable job of it. The president has repeatedly lavished praise of the Chinese government. While Trump has claimed his opponent is compromised by financial dealings with China, Trump and his family have a far more extensive record of not only dealing with China but using the presidency as leverage for self-profit.

The memo makes clear how perfectly cynical the party’s use of the “soft on China” charge is. It advises Republicans candidates to argue, “My opponent is soft on China, fails to stand up to the Chinese Communist Party, and can’t be trusted to take them on.” Note the telling phrase my opponent. The accusation is not specific to Biden, or any Democrat. Republicans have simply calculated they can use the smear against any Democrat, regardless of whatever the opponent has said or done.

The most ridiculous thing about the argument is its lack of any prospectively useful agenda. It urges candidates to promise, “I will stand up to China, bring our manufacturing jobs back home, and push for sanctions on China for its role in spreading this pandemic.” Even if these promises were feasible, none of them would do anything to contain the pandemic in the United States or to revive the American economy.

Suppose we imagine “standing up to China” could somehow force the Chinese Communist Party to confess its full guilt for the pandemic. What then? The memo urges Republicans to demand “sanctions” on China, but “sanctions” isn’t a magic word to force other countries to give us massive sums of money.

The memo’s plea for standing up to China seems to ignore the rather obvious fact that Donald Trump is president of the United States right now. If a tough-on-China policy could impose sanctions or force China to admit guilt or give back our manufacturing jobs, then Trump would be doing those things. If any of these slogans amounts to a solution, it is odd that Trump is ignoring them.

That Republicans are forced to pretend otherwise is an extraordinarily devastating concession. It’s normal for candidates to face difficult issues where the polling is so hostile that they can’t persuade the public and their only option is to change the subject. But this isn’t some side issue Republicans are trying to wave away. This is the most grave crisis in generations, a public health and economic emergency that everybody agrees will be the central issue of the campaign.

Republicans are already conceding that they won’t be able to argue that Trump kept us safe or has effectively managed the crisis. It makes perfectly clear the party’s obsessive focus on China is designed to distract from Trump’s catastrophic managerial failure. They are privately admitting his actions are literally indefensible.

Get the latest from Jonathan Chait in your inbox.