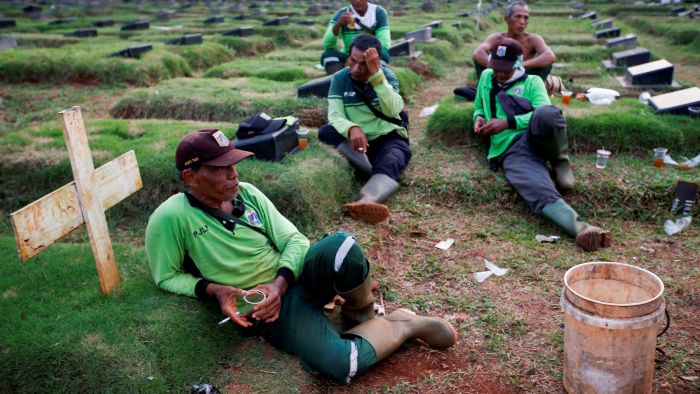 Countries with pre-existing conditions — poverty, limited healthcare, ineffective or corrupt governments — are fragile, and it is these countries that COVID-19 is threatening to push to the brink of survival.

Some have argued the United States has made solid start on the journey to failed-state status.

But for the Australian Government, the real concerns lie just to the north: Papua New Guinea and Indonesia.

Despite their obvious differences, both are at risk of becoming failed states because of the potential for a rapid decay of health, economic circumstances and — in a worst-case scenario — disintegrating public order.

In Canberra, thoughts have turned to what would happen if either country plunged into chaos.

It is not an indicator of the likelihood, but a rather recognition that Australia’s proximity to the countries means the possibility can’t be ignored.

Coronavirus update: Follow the latest news in our daily wrap.PNG on the precipice

Of all the Pacific nations struggling with twin health and economic crises, PNG is closest to the failed-state precipice.

PNG’s brew of debt-laden government, poor health services and social fragmentation means it is uniquely placed to suffer at the hands of coronavirus.

So far, eight coronavirus cases have been detected in PNG, but there’s little to commend in the low numbers.

They’ve been detected in four different provinces, with no clear source for most.

It’s likely the virus is already spreading in the community without detection and without treatment.

COVID-19 will be an added burden to the country, which is struggling to cope with myriad other preventable diseases, such as tuberculosis and malaria.

“Its health system is on the edge of breaking, if not already broken,” director of the Pacific Islands Program at the Lowy Institute, Jonathan Pryke, said.

Already looking for an emergency restructure of debt before the pandemic hit, it now has to deal with a downturn in the commodities market, which is a calamity for a resource-dependent country.

“It’s hard to define what a crisis looks like in Papua New Guinea,” Mr Pryke said, because the usual markers, such as “unstable government and struggling institutions, are already a common experience”.

The Australian High Commission in Papua New Guinea has been teaching locals COVID-19 preventative measures.(Twitter: John Philip)What the experts are saying about coronavirus:Indonesia late to act

In Indonesia, COVID-19 is spreading rapidly across the archipelago.

There are currently close to 9,000 detected cases of the virus and there have been more than 700 deaths.

But, as with PNG, the numbers don’t tell the real story.

In the early days of the global pandemic, Indonesia appeared strangely free of the virus while its South-East Asian neighbours detected cases and scrambled to respond.

The limited testing that has been done, and the spread of verified cases in neighbouring countries, suggests the virus has a much larger presence in Indonesia than claimed.

This chart uses a logarithmic scale to highlight coronavirus growth rates. Read our explainer to understand what that means — and what we can learn from countries that have slowed the spread.Fears virus will lead to chaos

Australian Government officials fear that should coronavirus spiral out of control in either country, there is a real risk of public disorder and chaos.

That could be prompted either by political unrest due to frustration at government inability to contain the virus or offer treatment, or lawlessness as people fight for meagre medical resources or even food.

The existing hardships in PNG make such a scenario less likely, according to Mr Pryke.

“Institutions in PNG are already doing very little for the average Papua New Guinean,” he said.

“The vast majority get on with life without expecting much from their Government.”

However, the crisis could further weaken Port Moresby’s control of the country.

“There has been a push to move to more province-based control and we might see more of that.”

Of particular concern is the Highlands, where there is already tribal-based violence and conflict over land.

“If the state is less capable of keeping a lid on violence, which it already struggles to do, then the Highlands could descend into lawlessness,” Mr Pryke said.

While in PNG there is a degree of apathy towards government and national institutions, Indonesia has a far more restive citizenry.

If Jakarta falls short in providing support to those suffering because of the pandemic, “we’ll know about it”, according to Ian Kemish, a former diplomat with expertise across Papua New Guinea and Indonesia, as well as business and charitable interests in the region.

“Politics is very local in Indonesia and, no matter where outbreaks of COVID-19 are, we’ll know about it through social media,” he said.

“The short-term political impact could be sharper in a place like Indonesia, compared to PNG.”

There are currently 9,000 recorded cases of coronavirus in Indonesia, but the true figure could be much higher.(Antara Foto/Arif Firmansyah via Reuters)Where to from here?

The Australian Government is juggling the prevention of a crisis at home and planning for one to eventuate abroad.

The Australian Government has more confidence in Mr Marape’s ability to handle the crisis than previous administrations, but grave concern that won’t be enough to prevent disaster.

Mr Marape was already attempting to restructure the nation’s crippling 27 billion kina ($11.8 billion) debt burden, having secured a short-term loan from Australia to buy time to come to a deal with the International Monetary Fund (IMF).

But since the pandemic began smashing the global economy, about 80 countries have sought emergency financial help from the IMF.

It explains, in part, why Mr Morrison pressed the need for the international community to support Pacific countries at both a recent virtual meeting of G20 leaders and in a phone call with US President Donald Trump.

The Government also feels the weight of historical duty to help PNG, as well as the international community’s belief that it is Australia’s responsibility.

Further financial support for PNG is possible, but there is little appetite and limited means for more comprehensive intervention.

In the best-case scenario, in which PNG officials coordinate a strong response to the virus, the country could still be beset by imported cases via its porous border with Indonesia.

What really troubles minds in Canberra is the possibility of chaos in Indonesia, where expectations of government support are thick and social cohesion is thin.

Contact with Jakarta is less frequent and, in any event, there is little Australia can do to assist if there is social disintegration in the archipelago.

In a global pandemic where so much is unknown, it is impossible to plan for every eventuality.

In considering how to balance the needs of neighbours with the needs of Australian citizens at this time, Mr Kemish poses this question:

“Is it acceptable for Australia to have a neighbour that is ungoverned?”

He said churches, charities and corporations, which all had strong links in the region already, could help Australia’s neighbours through this time too.

For PNG, Mr Kemish believes the COVID-19 outbreak will be “a pivotal moment”.

“This really is one of its most challenging moments since independence,” he said.

However he said PNG had proven to be resilient.

“PNG has been judged by some to be on the verge of being a failed state almost constantly since independence, but rumours of its demise never really materialised.”

What you need to know about coronavirus:Space to play or pause, M to mute, left and right arrows to seek, up and down arrows for volume.WatchDuration: 5 minutes 9 seconds5m Dr Norman Swan compares Australia’s coronavirus response to Sweden’s.

Don't Miss it Coronavirus: One big weekly shop back in fashion, says Tesco
Up Next What the Coronavirus Crisis Reveals About American Medicine