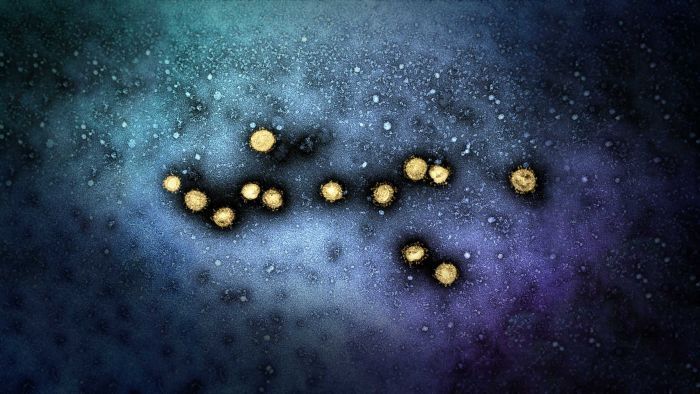 For more than two decades, Dr Jason Roberts has been routinely peering into microscopic netherworlds and observing the behaviours of some of nature’s most deadly nano-sized insurgents.

A senior scientist at the Victorian Infectious Diseases Reference Laboratory in Melbourne, Roberts is also a consultant virologist with the Australian Government’s polio eradication program.

In early February, he was among the first Australians to observe the virus, which, a few days later, would be given the official name of SARS-Cov-2.

And as an accomplished scientific illustrator, he is also skilled in the use of powerful electron microscopes (EM) to capture images of viruses and then use those to recreate intricate three-dimensional models.

Although he didn’t know it at the time, he was snapshotting a virus that would transform into the mother of all disruptive pathogens, a biological wrecking ball that has become an existential threat to our way of life.

“You’re looking at the enemy,” says Roberts, recalling those first encounters. “It’s invisible to everyone else in the world.

“But to us in virology, especially in EM, it’s not invisible. We see it. We know what it looks like.”

To eyeball the virus is to know its shape and structure. Armed with that knowledge, scientists can begin to decipher its genomic mission, a vital first step in understanding how to neutralise this invisible enemy.

As with all viruses, SARS-CoV-2 exists in a limbo somewhere between the animate and the inanimate.

Like a seed, a virus will only spring into action if it finds the right kind of conditions. Otherwise it will perish.

A virus in this stage is known as a virion. As they cannot replicate on their own, virions must find a suitable host in order to survive.

“It is really just a short fragment of genetic code,” explains Roberts. “[But] it’s amazing that such a little bit of code can wreak such havoc.”

Roughly spherical with a fringe of projections called spike proteins or peplomers, a SARS- CoV-2 virus particle typically measures about 100 nanometres in diameter. That’s about 10,000 times smaller than a grain of salt.

Each virus comes equipped with an outer layer, or viral envelope, that is designed to penetrate a cell and deliver its cargo of genetic material into the host.

Roberts describes that cargo as being “spring-loaded, like a jack-in-the-box”. When it finds the right target, “it just goes ping and delivers it”.

“Once that code gets into a cell, it hijacks the [cell’s] replication machinery. It’s now able to reproduce; it’s able to evolve; it’s able to metabolise energy.”

And there’s no escaping them. Our biosphere is teeming with viruses.

A 2011 paper in the research journal Nature Reviews Microbiology calculated there were approximately 1 x 1031 of viruses on earth — that’s a number with 1 followed by 31 zeros.

Despite the bad rap they get, not all viruses are bad for us.

Roberts says the human race couldn’t survive without some of them, like those found in our guts which help to keep our digestive systems in balance.

“Viruses,” he says, “are the oil that lubricates the gears of evolution.”

Roberts’s lab is part of the Peter Doherty Institute for Infection and Immunity. That’s the same organisation which in late January became the first lab outside China to successfully grow a sample of the SARS-CoV-2 virus.

They used a specimen taken from one of the first people in Australia to test positive to COVID-19 in Australia, on Friday, January 24.

These were the first, blurry images they produced. They were not published or distributed because of the image quality.

Roberts vividly recalls that first impression and the mood in the lab that day.

“Initially, there was excitement … and then it was just like this dread: This thing’s really quite terrifying.”

The sample showed the presence of many virus particles, much more than they expected to see.

“We had this moment of clarity and sort of urgency that you need to get on to what’s got to be done, get results out there, collaborate…”

Around January 31, the Doherty Institute had also delivered a small vial containing a sample of the virus it had cultivated to the CSIRO’s Australian Centre for Disease Preparedness (ACDP) in Geelong.

The sample was taken by members of ACDP’s dangerous pathogens team into the most secure part of the facility where they grew the virus from the original culture.

ACDP is one of the few facilities that includes a certified Physical Containment Level 4 (PC4) lab area, the place where dangerous pathogens go to be cultivated, examined and stored.

The facility has been constructed on a box-within-a-box principle.

Sections are air-locked, ensuring physical containment is duplicated or triplicated, in case one fails.

The secure area is surrounded by a 30cm-thick concrete wall and held at a lower air pressure than the outside world, to keep any airborne infectious agents inside.

ACDP is also where Sandy Crameri has worked for 30 years as electron microscopist specialising in viruses. She’s also one of the most experienced.

Over the years, she has seen and imaged the worst of the worst: pathogens such as SARS, MERS, HIV, Hendra, Ebola and H1N1, the virus that triggered the 2009 swine flu pandemic.

Around February 10, Crameri recalls receiving her first sample to examine.

“When I first looked at the peplomers, which are the crown-like things, I thought, ‘wow, they’re really obvious’,” she says.

“Then I invited my colleagues … to come and have a look because everyone was interested to clap eyes on it when we first got it here.”

Crameri quickly turned around her first image, a monochromatic version of this image below, which after colourisation — which took a day or so more — was published by the CSIRO.

Her image of a SARS-CoV-2 virion was taken with a transmission EM, which fires electrons through the specimen to reveal the structure, producing a two-dimensional image.

It was prepared using what is called the negative staining method, which enhances the contrast of the specimen. It’s among the oldest and most widely used EM imaging techniques and produces relatively quick results.

Instead of using visible light, electron microscopes fire an accelerated beam of electrons at the specimen. As electrons have a much shorter wavelength, they can deliver higher magnification and better resolution, producing much more detailed imagery.

All electron microscope images come out in greyscale with colouring added later.

While colour is used in research to highlight certain features, Crameri says it’s also added with an eye to making something that will catch the public’s attention.

“I didn’t want to pick red, for example, because red is a sort of alarmist colour,” she says, explaining her choices. “So I asked my colleague what colour she liked and she said burnt orange.”

So burnt orange it became and Crameri chose the complementary colour — which was a blue — to colour the background, allowing the virion to pop out more.

The image is similar to one in a series of images produced by Roberts, with assistance from Andrew Leis on February 7.

It shows a single virion, with its distinctive spike proteins clearly visible. This too, is a negative stain image captured on a transmission EM.

“If you look at the first images that came out, they were pretty crappy, to be honest,” he says. “It’s through fine-tuning the virus growth and tweaking that we managed to get some really amazing particles.”

Roberts chose to colour the yellow-orange hues with a dark background to reflect the danger posed. The background is what he calls the peacock effect — a purple, blue and green gradient that reflects the bird’s plumage.

Another type of virus imaging is one produced using a scanning electron microscope (SEM), which is not a piece of equipment used by either Crameri or Roberts.

As the name suggests, it scans the surface of an object rather than looking through it. And it gives a much more contoured, and — after colours are applied — textured, effect.

Scanning EMs were used to take images like the one below produced by the US National Institute of Allergy and Infectious Diseases (NIAID) by its Integrated Research Facility.

Each of the yellow dots on the image below is a coronavirus particle and corresponds to the images of the single virus particles shown above that were captured by Sandy Crameri and Jason Roberts.

This image shows a cell taken from a patient sample (in blue) heavily infected with SARS-CoV-2 virus particles.

“Whilst the images from NIAID are interesting visually, they are not high enough resolution to give any real structural information regarding the virus,” he says.

Scanning EM micrographs of SARS-Cov-2 virions budding from a cell.

NIAID, which is headed by Dr Anthony Fauci, one of US President Donald Trump’s chief advisers during the current coronavirus crisis, has produced a series of stunning scanning EM of the SARS-CoV-2 virus.

A new frontier in microscopy

Roberts is also using a process known as cryogenic electron microscopy — or cryo-EM for short — an advanced molecular imaging technique.

The 2017 Nobel Prize for Chemistry was awarded to three scientists for their work in developing cryo-EM, which, according to the citation, had “moved biochemistry into a new era”.

Although the technique was developed in the years between the 1970s and 1990s, it’s only in more recent times that the technology has caught up, allowing the images to be transformed into sophisticated 3D models.

The process involves snap-freezing the virus in a thin layer of ice about 1,000th of a human hair thick, essentially capturing the specimen in suspended animation.

Roberts produced this image, which shows a single virion suspended in that ice layer, which appears as the darker background area.

With cryo-EM imaging, it is also possible to combine thousands of these pictures together — all taken at slightly different angles — to form a three-dimensional image, or tomogram.

Tomography is the T in CT imaging, sometimes known as CAT scanning, which produces a cross-sectional image of anatomy and is a form of diagnostic imaging used by doctors.

The only difference is that EM uses electrons instead of x-rays.

Roberts says tomography using cryo-EM images is a recent technique and is the process his team is currently using to build their models.

“It will give you a very good idea of how the virus is laid out and what’s its generalised structure.”

This image, below, is an example of a tomogram taken by Roberts on April 17.

The parts coloured green and purple are part of the host cell, which is from an animal kidney.

One of the virus particles can be seen exiting the cell in a process known as budding, which is a form of replication.

This is a short 3D-effect video of the tomogram which shows that same slice of infected cell (as the image above).

It was produced by stitching together 126 individual two-dimensional EM images taken at different angles.

The thousands of EM images collected become parts of a jigsaw puzzle, enabling scientists to piece together the virus’s atomic structure.

That will then help to explain its tactics — its strategy for entering and exiting the cell, how it reproduces and what its weaknesses are.

Researchers can then either use existing drugs or develop new drugs to try and disrupt those viral processes.

The key lies in those atoms, Roberts says.

“Once you understand the atomic structure of a virus, you have a pretty good idea of how to knock it over.”