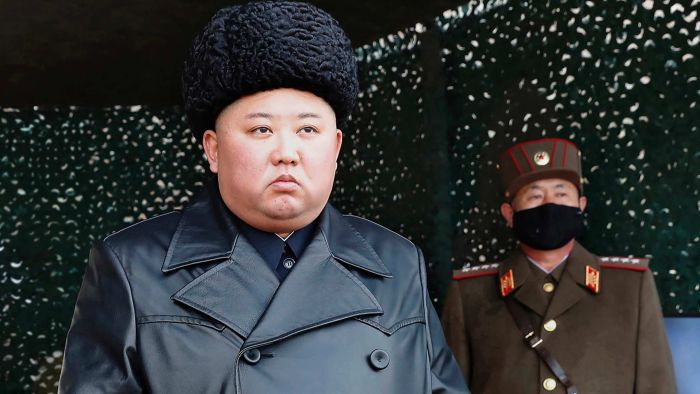 North Korea closed its border with China on January 22, one day before the coronavirus epicentre Wuhan was placed under lockdown, and a week before the US and Australia moved to close their borders to Chinese visitors.

Key points:North Korea claims to have zero cases of COVID-19 within its bordersExperts doubt this claim and worry about its weak, underfunded health systemMany medical clinics have no running water, electricity, soap or hand sanitiser

Did Pyongyang know something about the virus that other countries didn’t, or were they just reacting quickly to what was then an emerging public health threat?

As with a lot of things to do with North Korea, it’s very hard to know — it is one of the most secretive countries in the world.

But according to state-controlled media, whatever North Korea is doing to combat COVID-19 seems to be working: it claims to have zero cases of the infection within its borders.

“I am suspicious of that zero,” W Courtland Robinson, an associate professor at Johns Hopkins University’s Centre for Humanitarian Health, told the ABC.

“Even with an effective prompt response, given the proximity to China and the ease with which the virus spreads, it seems more likely that North Korea has had at least some cases.”

Coronavirus update: Follow the latest news in our daily wrap.An early and assertive response North Koreans are being encouraged to wear face masks, while shops and schools have been closed.(AP: Cha Song Ho, file)

North Korea surprised many when it moved early to close its borders with China in late January.

Citizens of mainland China have historically been the largest cohort of tourists to North Korea, providing an important source of foreign currency given the impacts of ongoing trade sanctions.

At first glance, Pyongyang does seem like the socialist fairyland the Kim dynasty always dreamed it would be — but it quickly becomes clear things are a lot more complicated.

Internal travel has been limited within North Korea in response to the COVID-19 pandemic. Foreigners in the country and citizens returning from abroad have been placed under strict quarantine.

Public sites have been closed, and the wearing of face masks is being promoted — the young and the elderly are being told to stay home, and schools and shops have been shut.

“There is no clear evidence of policies of social distancing or roll-outs of widespread testing and contact tracing,” he said.

It has also been a notably different response from North Korea compared to previous pandemic events.

“North Korea has had experience dealing with SARS and Ebola and, though they had no outbreak of either in the country, their response was not particularly urgent or highly coordinated,” Mr Robinson said.

“It is possible that they had some early knowledge about how quickly COVID-19 was spreading through Wuhan and into other areas and decided to act quickly and aggressively.”

Soldiers photographed with Kim Jong-un have been seen wearing face masks during the pandemic.(Korean Central News Agency via AP, file)

Katharina Zellwegger, a visiting fellow at Stanford University and a former North Korea country director at the Swiss Agency for Development and Cooperation (SDC), said the country’s response to this pandemic had been “much more assertive”.

“This may have helped to prevent the spread of the virus,” she told a briefing organised by think tank the Wilson Centre earlier this month.

Jie Chen, a researcher in Chinese politics and international relations at the University of Western Australia, said North Korea had a strong understanding of China’s publicity and propaganda work, and the similarity in two countries’ political systems played a part.

“North Korea was very concerned about it at a very early stage because their leaders understood authoritarian regimes well,” Dr Chen said.

“They knew what was going on … That was why they closed the border before the Wuhan lockdown.”

Weak hospitals and vulnerable people North Korean hospitals are mostly outdated and dilapidated, according to one expert.(Lee Jae-Won: Reuters, file)

Ms Zellwegger has experience with North Korea’s health system, both in her previous work with the SDC and in her current position as the director of Koraid, a Hong Kong-based NGO working with vulnerable children and people with disabilities in North Korea.

She said the country was facing a large number of health problems even before coronavirus came along, and that its health system had been struggling for some time.

“The health sector has been, from my viewpoint, neglected by international aid organisations, with only a few working in this sector,” she said.

“Hospitals are most of the time old and dilapidated … many have outdated equipment, limited basic drugs.”

Mr Robinson from Johns Hopkins University said many hospitals did not even have access to fuel or running water, while sophisticated equipment was either “non-functioning or non-existent”.

“The public health infrastructure is weak and underfunded for many decades,” he said.

Malnourishment, especially among infants, is an issue across North Korea.(Reuters: Damir Sagolj, file)

Maternal mortality, low birth weights and childhood malnutrition are ongoing problems, along with infectious diseases like malaria, hepatitis B and tuberculosis (TB).

“That same year, there were 5,200 cases of multidrug-resistant TB [MDR-TB], which is probably an underestimate.”

Ms Zellwegger said she understood stocks of TB drugs were set to run out in May or June, with new supplies unlikely to make it into the country on time.

How business interests in parts of Asia, Africa, the Middle East and even Europe bring in billions for the rogue regime.

She said the difficulty of running aid programs in North Korea, especially in an area like health care, was part of the issue — a problem compounded by international sanctions that made importing vital supplies much harder.

“It is prohibited to import anything metal — just think of medical instruments, even small items like tweezers or scissors,” Ms Zellwegger said.

“For an exemption, a letter from the UN Security Council Sanctions Committee is needed, and that is a time-consuming, difficult, complicated process.”

Reluctance to provide funds for aid projects in North Korea has seen appeals run by the UN come up short, but even accessing those funds can be difficult due to sanctions on money transfers to the nuclear-armed nation.

Stay up-to-date on the coronavirus outbreakWhat would happen if there was an outbreak? Experts say North Korea’s health facilities would struggle to treat patients with COVID-19.(AP: Cha Song Ho)

State media reports maintain there have been no cases of COVID-19 detected in North Korea.

Similarly, veteran journalist Jean H Lee, the former Pyongyang bureau chief for the Associated Press, told the Wilson Centre briefing it was important to always question the veracity of those reports.

She said many foreigners living in North Korea had decided to leave due to the pandemic, making it very difficult to get an independent reading on what was happening there.

“We may never know how many North Koreans have died [from COVID-19], but what we do know … is that a wide swath of the population would be extremely vulnerable,” Lee said.

During her time in the country, Lee visited many North Korean health facilities, from the best hospital in Pyongyang to local clinics run by women.

“I still remember one clinic where the doctor told me they didn’t even have the medicine to stop diarrhoea, and that diarrhoea was the main cause of death in her community,” she said.

“Imagine how difficult it would be for them to cope with an epidemic like COVID-19.”

While the facilities are most often “spotless” in terms of cleanliness, they often don’t have running water, electricity or even soap.

University students are attending classes, but must have their temperature checked on entry.(AP: Jon Chol Jin)

“So it’s very hard to maintain the kind of hygiene that we are asking here in the United States to stop the spread,” Lee said.

“Forget about ventilators — they don’t even have soap or sanitiser.”

Steve Chung, a researcher on Korean politics and culture at the Chinese University of Hong Kong, told the ABC that medical facilities in North Korea lagged far behind developed counties.

“The best hospitals in North Korea are literally 30 to 50 years behind the West, and that is a very conservative estimate,” Mr Chung said.

Kim Ryen-hui says she was deceived into defecting to South Korea, but now she’s forbidden from returning to North Korea. With the two countries are still at war, any defections are deeply politicised and fodder for propaganda.

He said general medications and disinfectant were smuggled out of China into North Korea, due to an inadequate supply of critical items and the lack of public health information provided by the Government.

Dr Chen said North Korea “couldn’t afford to lose the fight” against the COVID-19, which was why the country responded quickly.

“North Korea has one of the most disadvantaged public health systems in the world, and UN sanctions against it means the country will hardly get international aid during the pandemic,” Dr Chen said.

But there are signs of outside help filtering in.

The International Federation of Red Cross and Red Crescent Societies (IFRC) was granted an exemption to UN sanctions on North Korea in late February, and UNICEF confirmed that critical personal protective equipment was provided to North Korea for 500 health workers in March.

Lee added there were some signs leader Kim Jong-un was moving his focus towards the emergency response — and away from the failure of his nuclear negotiations with US President Donald Trump.

“He had to come up with a way to show his people that he was on top of policy, and this emerging public crisis has given him that opportunity, in effect,” Lee said.

One example was the push, led by Mr Kim, to have a new hospital in the capital built in just 200 days: it’s due to open in October, in time for the 75th anniversary of the ruling Workers’ Party of Korea.

“Whether the resources will be allocated toward medical care that will help all North Koreans, not just members of the elite, I think that’s something we need to watch for,” Lee said.

Space to play or pause, M to mute, left and right arrows to seek, up and down arrows for volume.WatchDuration: 6 minutes 53 seconds6m What are the long-term costs of accessing superannuation early?