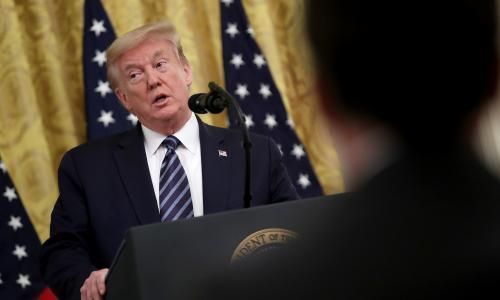 Donald Trump claims to have seen evidence to substantiate the unproven theory that the coronavirus originated at the Wuhan Institute of Virology, despite US intelligence agencies’ conclusion that the virus was “not manmade or genetically modified”.

“We’re going to see where it comes from,” Trump said at a White House event on Thursday. “We have people looking at it very, very strongly. Scientific people, intelligence people, and others. We’re going to put it all together. I think we will have a very good answer eventually. And China might even tell us.”

Pressed to explain what evidence he had seen that the virus originated in a Chinese lab, Trump responded, “I can’t tell you that. I’m not allowed to tell you that.”

Prior to the White House event, the Office of the Director of National Intelligence, the clearinghouse for the web of US spy agencies, issued a statement asserting that the intelligence community “concurs with the wide scientific consensus that the Covid-19 virus was not manmade or genetically modified”.

“The intelligence community will continue to rigorously examine emerging information and intelligence to determine whether the outbreak began through contact with infected animals or if it was the result of an accident at a laboratory in Wuhan,” the statement added.

Related: US intelligence agencies under pressure to link coronavirus to Chinese labs

Trump is increasingly making Beijing’s handling of the outbreak a major issue for his November re-election campaign and has repeatedly threatened retaliation against Beijing.

The president and his allies have repeatedly touted the theory – for which there is no evidence – that an infectious disease lab in Wuhan, the center of the Chinese outbreak, was the source of the global pandemic that has killed more than 220,000 worldwide.

The World Health Organization’s representative in China, Gauden Galea, said the organisation has made requests of Chinese authorities to join research into the origins of the virus. “We know that some national investigation is happening but at this stage we have not been invited to join,” he told Sky News in remarks published on Thursday.

He said the WHO has not been able to look at logs from two laboratories in Wuhan that were working on viruses but that researchers are convinced the disease was not manufactured.

“From all available evidence, WHO colleagues in our three-level system are convinced that the origins are in Wuhan and that it is a naturally occurring, not a manufactured, virus,” he said.

Mike Pompeo, the US secretary of state, said earlier this month that “the mere fact that we don’t know the answers that China hasn’t shared the answers I think is very, very telling”. Pompeo pressed China to let outside experts into the lab “so that we can determine precisely where this virus began”.

Scientists say the virus arose naturally in bats. Even so, Pompeo and others have pointed fingers at an institute that is run by the Chinese Academy of Sciences. It has done groundbreaking research tracing the likely origins of the Sars virus, finding new bat viruses and discovering how they could jump to people.

“We know that there is the Wuhan Institute of Virology just a handful of miles away from where the wet market was,” Pompeo said two weeks ago. The institute has an address eight miles, or 13 km, from the market.

US officials say the American embassy in Beijing flagged concerns about potential safety issues at the lab in Wuhan in 2018 but have yet to find any evidence the virus originated there nearly two years later.

After initially praising the Chinese government’s handling of the coronavirus outbreak, Trump has reversed course in recent weeks, blaming China for not containing the virus more quickly.

On Thursday Trump said: “I don’t want to cast any dispersions [sic], I just will tell you that China would like to see sleepy Joe Biden” win the presidential election in November. “China doesn’t want to see me re-elected.”

Related: Trump claims China will ‘do anything’ to stop his re-election as coronavirus row escalates

The president’s recent attacks on China line up with leaked Republican party memos, published by Politico, encouraging candidates to aggressively target Beijing in their public remarks on the pandemic.

The Chinese government said on Thursday that any claims that the coronavirus was released from a laboratory were “unfounded and purely fabricated out of nothing”.
The foreign ministry spokesman Geng Shuang cited the institute’s director, Yuan Zhiming, as saying the lab strictly implements bio-security procedures that would prevent the release of any pathogen.

Geng also refuted Trump’s claim that China was attempting to meddle in the US election. “The US presidential election is an internal affair, we have no interest in interfering in it,” he said.

He also criticized US politicians who have suggested China should be held accountable for the global pandemic, saying they should spend their time on “better controlling the epidemic situation at home”.

In an op-ed published on Thursday, editor of the state-run Global Times, Hu Xijin, labelled Trump’s focus on China a “stunt to divert Americans’ rage towards his administration’s own incompetence in fighting the virus”.

“Only by making Americans hate China can they make sure that the public might overlook the fact that Trump’s team is stained with the blood of Americans,” said Hu.

Don't Miss it Every COVID-19 outbreak in Ontario, mapped
Up Next New research suggests Covid-19 could affect the blood of patients | 7.30