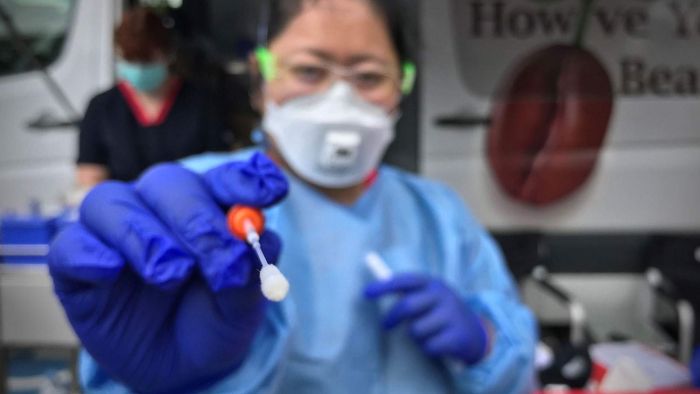 WA Premier Mark McGowan has outlined the State Government’s plan to begin widespread COVID-19 testing in schools, saying it will be less invasive than what is used in fever clinics.

Key points:About 80 schools will take part in tests as part of the Detect ProgramBoarding schools have been allowed to reopen with conditions511 people have recovered from COVID-19 in WA so far

The new “spot checking system” will be rolled out to significantly “ramp up” testing across the community.

It will be voluntary and will require the consent of staff and parents on behalf of children.

The State Government will partner with the Telethon Kids Institute to conduct the study, dubbed the Detect Program, which will “design a population study to examine the prevalence of COVID-19 in key sectors of our community”, Mr McGowan said.

“Initially the study will examine possible undetected COVID-19 infection among school students and staff who are not displaying any symptoms.

“Our schools are safe, but what this does is help us understand and learn more about the virus and provide more confidence to the people of Western Australia.”

About 80 public schools, educational support centres and residential colleges will be involved in the study.

A different type of testing swab will be used in schools — a less invasive, “shallower” throat and nose swab than what is used across the wider community.

Director of the Telethon Kids Institute, Jonathan Carapetis, said there would also be an online survey component to help better understand the psycho-social impact of the virus.

Telethon Kids Institute director Jonathan Carapetis says the testing program will include evaluation of the psycho-social impacts of the virus.(ABC News: Hugh Sando)

“It will explore what the impact of the pandemic has been on peoples’ emotional and social wellbeing and well as their physical wellbeing,” Dr Carapetis said.

Mr McGowan said following the rollout of testing in schools the study would be extended to frontline healthcare and FIFO workers.

“We’re very pleased that the Government has prioritised the testing of students and teachers as part of its COVID-19 research,” Union President Pat Byrne said.

However, she said members continued to be concerned about safety and hygiene in schools.

The Union said it surveyed 2,000 teachers upon the return to school this week and found 18 per cent did not have adequate hand sanitiser in their classrooms.

Ms Byrne said in some instances, teachers had bought their own cleaning wipes for “peace of mind”.

State School Teachers Union president Pat Byrne says a third of teachers who responded to a survey did not feel safe at work.(ABC News: Alisha O’Flaherty)

The union said nearly one third of its members had to provide both face-to-face and online teaching concurrently, which Ms Byrne described as “impossible to do”.

“It creates a stressful situation for teachers and doesn’t deliver the best outcomes for students either,” Ms Byrne said.

The survey also found a third of teachers did not feel safe at work this week, despite the State Government’s efforts to assure teachers and students.

WA Education Minister Sue Ellery Minister confirmed an additional 14,000 students attended public schools on Thursday on the second day of term, increasing average attendance to 60.2 per cent from 58.5 per cent on Wednesday.

Ms Ellery today announced boarding schools could now reopen “where numbers can be managed safely and the health requirements can be met”.

She said there were about 1,100 students who boarded at public school facilities across the state.

“This has been a really important issue for regional families,” Ms Ellery said.

She said there was significant variation in the size, capacity and enrolment of each residential boarding facility.

“In addition, the layout and design of the facilities will have an impact on the ability to meet the hygiene requirements,” Ms Ellery said.

“Year 12 students will be able to return to every public school boarding facility.

All students would get their own room but they would not be allowed to leave the college during the term to travel home or visit friends. Outings and excursions have been cancelled.

Ms Ellery said $343,000 would be spent on cleaning staff and supplies to accommodate an extra 77 hours of cleaning at each facility weekly.

Ms Ellery said all year groups would be able to return to residential colleges in:

Years 10, 11 and 12 will be able to return to residential colleges in:

Year 12 students will return to residential boarding at Cunderdin College of Agriculture.

Year 11 and 12 students will return to residential boarding at Denmark, Harvey and Narrogin colleges of agriculture.

All year groups will return to Morawa College of Agriculture.

“This model will allow our most senior students to resume their education face-to-face as soon as possible,” Ms Ellery said.

Ms Ellery said principals would contact families directly to discuss the arrangements, with the facilities open from Tuesday.

She said it was still up to the parent whether their child attended.

Catholic and independent schools will make their own decision about reopening their facilities in line with the guidelines, Ms Ellery said.

No new cases overnight in WA

Western Australia has reported no new cases of COVID-19 for the third day in a row and a further four people recovered from the virus overnight.

Of those, 23 are West Australians, one person is from interstate and the rest are from overseas.

There are only three active cases in regional WA, all in the Goldfields region.

There are now 11 patients in Perth metropolitan hospitals and three remain in intensive care units.

WA Health Minister Roger Cook said the state was changing the way it reported on the number of COVID-19 tests being done.

“Because some people are tested more than once, the reported number of tests performed in Western Australia has increased significantly,” Mr Cook said.

The Premier said his government would look to provide a “roadmap” on easing restrictions across the state.

“Next week will be very instructive, we have to keep having very low rates of infections if we’re to make changes,” he said.

Mr McGowan said it was unlikely to include a timeframe on exactly when the restrictions would lift, given the potential for rapid change.

WA’s path out of lockdown

It looks increasingly likely some of WA’s coronavirus restrictions will soon be eased — but little is known about the plan to roll back the rules.

“I just look at this through the prism of all those people looking for work and all those businesses … that are shut up and I want to make sure we provide an answer for those people,” Mr McGowan said.

“We are not going to do anything that jeopardises health, we’ve done a good job so far I don’t want to throw that in the toilet.

West Australians have been encouraged to keep attending their general practitioner after a significant decline in regular check-ups and appointments amid the coronavirus pandemic.

The WA Primary Health Alliance (WAPHA) said a survey of some GP surgeries saw a decrease in appointments of up to 30 per cent.

There are concerns fears about the virus are keeping people away from their doctors, which could lead to critical health conditions being left undiagnosed and untreated.

Health Minister Roger Cook said some people were also worried about adding pressure on the health system, but he urged people to dismiss these concerns.

“It’s incredibly important that you look after your health, particularly at a time of COVID-19,” Mr Cook said.

“We know that one of the best ways to look after your health is to continue to have a strong and ongoing relationship with your GP.

“When you come to a GP clinic, you might see some changes.

Mr Cook said it was especially important to get to your GP for the flu vaccination.

“[People] are anxious about what to do and where to go, the first thing they are neglecting is their own health,” Dr Choong said.

“You can now visit your doctor online, on the telephone or in person and we will ensure that your health is our number one priority.”

Mr Cook has urged the community to “do the right thing” this weekend — the first after some WA coronavirus restrictions were eased.

Here’s what you can and can’t do in WA now coronavirus restrictions have partially eased.

“If as a community we continue to practice good social distancing, continue to observe the guidelines … well then we won’t see those numbers increase and we’ll be able to continue to enjoy more freedoms,” Mr Cook said.

The Northern Territory has reported no new cases of the virus for about three weeks and has announced a roadmap for removing restrictions.

Mr Cook said it was an example of the position WA could be in if low numbers continued.

“You see there what we could be doing in three weeks’ time if we continue to see low cases and people continue to do the right thing,” Mr Cook said.

Mr Cook said WA could expect COVID-19 cases to rise with a “steady steam” of people arriving by international flights.

Passengers have so far been taken to Rottnest Island or hotels in the city to serve out a quarantine period.

More passengers are set to arrive from overseas and some will be infected, the Health Minister said.(ABC News: James Carmody)

One more flight, from Doha, arrived in Perth overnight and passengers were taken to hotels in Perth for 14 days of quarantine.

“We will have positive cases in these flights that come back to Western Australia,” Mr Cook said.

“That really underpins the importance of making sure we put people … in those hotels so that if in the event they are positive they don’t have the capacity to spread the disease.”

What you need to know about coronavirus:Space to play or pause, M to mute, left and right arrows to seek, up and down arrows for volume.WatchDuration: 5 minutes 33 seconds5m Privacy concerns over new technology to help track the spread of coronavirus

Don't Miss it Physical distancing may not be eased any time soon | ABC News
Up Next I retired at 34—then lost $600,000 due to Covid-19. Now I’m rethinking early retirement