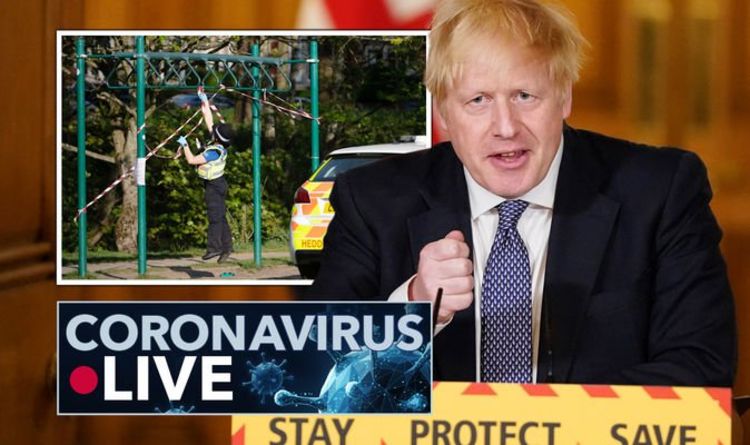 Ministers are preparing to ease restrictions on outdoor activities as the first stage in the country’s lockdown exit strategy. The changes are expected to be approved if COVID-19 infection rates keep falling but social distancing rules under which people must stay at least two metres apart will remain in place.

The move, which will see solitary sunbathers allowed to relax in parks and people to exercise more than once daily, follows new scientific advice to ministers that the risk of transmitting the disease outside is substantially lower than indoors.

But playgrounds and beaches where crowds congregate and the two-metre rule becomes harder to observe will still be off-limits.

Boris Johnson’s review of the lockdown on Thursday is not expected to lead to any more substantial changes until next month.

Public transport is likely to return to normal levels in June alongside the reopening of non-food retailers, factories, warehouses and more construction sites.

Offices workers will probably still be working from home beyond next month, while pubs and restaurants are likely to remain closed for weeks longer.

The UK’s official coronavirus now stands at 28,131 after the figure increased by 621 as of yesterday.

Ministers have warned there will need to be a significant fall in the. number of daily deaths before lockdown can be eased.

Pope Francis has called for international scientific co-operation to discover a vaccine for coronavirus and said any successful treatment should be made available around the world.

Francis, who has been delivering his Sunday address from the papal library instead of St Peter’s Square because of the lockdown in Italy, thanked all those around the world who were providing essential services.

He encouraged international cooperation to deal with the crisis and combat the virus, which has infected nearly 3.5 million people and killed more than 240,000 people worldwide.

He said: “In fact, it is important to unite scientific capabilities, in a transparent and impartial way to find vaccines and treatments.

“It was also important to guarantee universal access to essential technologies that allow each infected person, in every part of the world, to receive the necessary medical treatment.”

1.22pm update: Coronavirus app to be trialled on Isle of Wight

A smartphone app to trace the spread of coronavirus will be trialled on the Isle of Wight this week before being rolled out more widely later this month, the Government has announced.

Transport Secretary Grant Shapps said around 50 percent to 60 percent of people will need to use the software for it to be effective as he described it as the “best possible way to help the NHS”.

The NHSX app is part of the Government’s test, track and trace strategy and will be central to its efforts in slowing the spread of coronavirus.

Contact tracing has been used extensively in South Korea, Hong Kong and Germany, where outbreaks have been contained more quickly.

Schools in Wales could be allowed to reopen their doors next month in a phased approach, the first minister has said.

Mark Drakeford said the earliest point schools could resume would be the beginning of June, with a minimum of three weeks needed to prepare from the time it was decided it is safe for pupils and teachers.

He told the BBC’s Andrew Marr Show: “Our advice from the trade unions and from the local education authorities is that you will need three weeks as a minimum from the point that we decide to do that, to when schools can reopen, so we are talking about the beginning of June.”

World Health Organisation (WHO) bosses have warned all countries to remain “on alert” over the possibility of a second wave of coronavirus transmissions.

Maria Van Kerkhove, WHO’S technical lead on COVID-19, said many people remain susceptible to the virus, even where transmission has been suppressed.

Asked on the BBC’s Andrew Marr programme if a second wave of infection could be likely in countries that have started to ease their lockdowns, Ms Van Kerkhove said: “It’s certainly possible. What we’re seeing in a number of countries that have been successful in suppressing transmission is that many more people remain susceptible.

“All countries must remain on alert for the possibility of additional transmission even if they have been successful in suppressing transmission in the first round.”

A plane bringing PPE for NHS staff has flown into the UK from Malaysia (Image: PA)

A passenger plane has landed in the UK with 10 million pairs of surgical gloves for frontline NHS workers.

The Airbus A340 9H-EAL, with “Thank You NHS” written on its fuselage, arrived at Bournemouth Airport after picking up the supplies from Kuala Lumpur, Malaysia.

The aircraft, owned by Bournemouth-based European Aviation Group, touched down at around 8.15am today with the boxes of gloves then passed to NHS supplier Crest Medical, based in Warrington, which commissioned the delivery.

Education watchdog Ofsted said there was a “great deal of logic” in sending Britain’s youngest children back to school first when the coronavirus lockdown lifts.

Ofsted chief inspector Amanda Spielman said younger pupils needed “routine” and, from parents’ perspectives, are those who need the most “care and oversight”.

She said it was in all children’s best interests that they return to the classroom “as soon as possible” but there was no single “no-brainer answer” on how to do so.

Spain’s death toll from the new coronavirus rose by 164 to 25,264 on Sunday, health ministry data showed, marking the lowest one-day increase since March 18.

Madrid and Catalonia remain the two worst affected regions, with 8,332 and 5,185 fatalities respectively.

The declining death rate is an encouraging sign for Spain, which on Saturday took a large step towards unwinding its stiff lockdown by allowing adults to exercise outdoors for the first time in seven weeks.

Baroness Ros Altmann has warned keeping older people in lockdown longer as restrictions are lifted for the rest of the country would amount to “age discrimination”.

She said: “Using an age-based criteria would be fundamentally wrong and could potentially cost the lives of many people, and risk social unrest.

“So no I’m afraid it is definitely not going to be business as usual but we do want to make sure that people understand where the routemap lies.”

Shadow home secretary Nick Thomas-Symonds said that testing and tracing will be “so important” in easing the lockdown in the weeks and months ahead.

Speaking on Sky’s Sophy Ridge programme, he said: “We’ve been asking for the ramping up of testing so clearly I’m pleased that testing has been ramped up.

“I think there’s always been a difference between the number of tests actually carried out and the overall statistics, indeed the number of people tested is a different figure.

“But of course I’m pleased that testing has been ramped up. But that in itself is not a strategy.

“Firstly, the testing has to be increased further, I mean the original target we were talking about a quarter of a million tests a day some time ago, but it has to be linked to tracing as well and it’s that testing and tracing that is going to be so important now in terms of easing the measures of the lockdown in the weeks and months ahead.”

9.10am update: Minister warns no early return to business as usual

Britain will not return to “business as usual” this month after Boris Johnson sets out his roadmap for how the UK may come out of the coronavirus lockdown, Transport Secretary Grant Shapps has said.

He told Sky’s Sophy Ridge On Sunday: “I don’t think we should expect us to go from this situation that we have at the moment of social distancing back to where we were in February – that’s clearly not going to happen and I don’t think anyone imagines that for one moment.

“The most important thing is that the absolute focus of what the Prime Minister will be announcing later in the week is that what we do do going forward doesn’t undo the brilliant work people have been doing to get that R number below 1 – the all-critical reproduction rate doesn’t come back up because that’s when we’d see a second spike.

“So no I’m afraid it is definitely not going to be business as usual but we do want to make sure that people understand where the routemap lies.”

Russia has recorded its highest daily rise in confirmed coronavirus cases with 10,633 new cases, bringing the overall number of cases to 134,686.

Official figures show the mortality rate has slowed in recent days however, and remains much lower, in relative terms, than many other countries.

The nationwide death toll rose to 1,280 after 58 people died in the last 24 hours, according to Russia’s coronavirus crisis response centre.

8.29am update: Half of doctors ‘source own ppe’

Almost half of doctors have sourced their own personal protective equipment or relied on a donation when none was available through normal NHS channels, according to a survey.

The British Medical Association said, while PPE supplies have improved, their data from more than 16,000 doctors shows there is room for improvement in protecting healthcare workers on the frontline.

Overall, 48 percent of doctors reported having bought PPE directly for themselves or their department, or had a donation from a charity or local firm.

The problem appeared to be higher among GPs, with 55 percent of them saying they had to do so, compared to 38 percent of hospital doctors.

More than 3.44 million people have been reported to be infected by the novel coronavirus globally and 243,015 have died, according to a Reuters tally.

Infections have been reported in more than 210 countries and territories since the first cases were identified in China in December 2019.

South Korea will further relax social distancing rules from Wednesday when the phased reopening of businesses gets underway.

Prime Minister Chung Sye-kyun said: “The government will allow businesses to resume at facilities in phases that had remained closed up until now, and also allow gatherings and events to take place assuming they follow disinfection guidelines.”

South Korea largely managed to bring the coronavirus outbreak under control with its strict lockdown and social distancing measures.

Don't Miss it Coronavirus: the personal tragedies behind the grim daily statistics – BBC News
Up Next Ontario reports 434 new cases of COVID-19, another 40 deaths