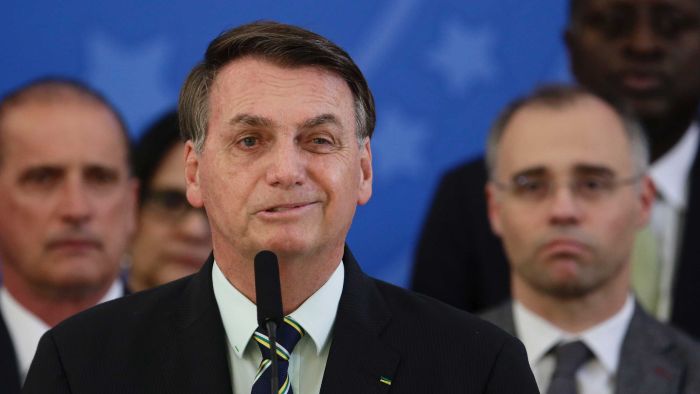 Brazilian leader Jair Bolsonaro has angered many after responding to a question about thousands of his citizens dying of coronavirus by saying “so what?”, while Spain makes face masks mandatory on public transport as it looks to ease restrictions.

This story is being updated regularly throughout Sunday. You can also stay informed with the latest episode of the Coronacast podcast.

Stay up-to-date on the coronavirus outbreakBolsonaro says ‘I don’t do miracles’ when asked about Brazil death toll Jair Bolsonaro has consistently downplayed the severity of the crisis.(AP: Eraldo Peres)

Brazil’s President Jair Bolsonaro has drawn criticism for responding “so what?” when asked about the fact that more than 6,000 Brazilians have died of COVID-19.

Observers believe the country, which is Latin America’s largest nation, is rapidly becoming one of the world’s coronavirus hot spots.

But Mr Bolsonaro has shown no sign of wavering from his insistence that COVID-19 is a relatively minor disease and that broad social-distancing measures are not needed to stop it.

He has said only Brazilians at high risk should be isolated and recently fired a health minister who had supported tough anti-virus measures and replaced him with an advocate for reopening the economy.

“So what? I’m sorry. What do you want me to do?” Mr Bolsonaro said when asked this week about Brazil’s death toll surpassing 5,000 — more than China.

He joked that even though his middle name is Messias, or Messiah, “I don’t do miracles”.

Spain makes masks compulsory Spaniards were able to go outdoors to do exercise for the first time since the lockdown began seven weeks ago.(AP: Bernat Armangue)

Spain’s government will make face masks mandatory on public transport from Monday, as it looks to further ease coronavirus restrictions.

The move comes as millions of Spaniards took another step towards freedom with adults allowed to exercise outside for the first time in seven weeks.

There are now exercise time slots for different age groups to avoid crowding.

For children under 14, the lockdown was eased last week.

Spain remains among the world’s worst affected countries, with 24,543 deaths and 213,435 confirmed cases as of Sunday morning.

This chart uses a logarithmic scale to highlight coronavirus growth rates. Read our explainer to understand what that means — and what we can learn from countries that have slowed the spread.Boris Johnson’s son named for doctors who ‘saved’ his life A photo posted by Boris Johnson’s fiance Carrie Symonds shows her holding the newborn Wilfred Lawrie Nicholas Johnson.(Supplied: Carrie Symonds/Instagram)

UK Prime Minister Boris Johnson and his fiancée Carrie Symonds have named their newborn son Wilfred Lawrie Nicholas, partly as a tribute to two of the intensive care doctors who they say saved the British leader’s life as he battled COVID-19 complications.

Ms Symonds announced the name on Instagram beside a picture of her and the boy — who already has thick hair resembling the blond thatch of his father.

Ms Symonds, 32, said Wilfred, who was born on Wednesday, was named after Mr Johnson’s grandfather while Lawrie came from her grandfather.

Nicholas, Ms Symonds said, was a nod to Nick Price and Nick Hart — two doctors who treated Mr Johnson. He has thanked healthcare workers at St Thomas’s hospital who, he said, had “saved my life, no question”.

“I couldn’t be happier,” Ms Symonds said, adding her thanks to the maternity staff of University College London Hospital.

Mr Johnson returned to work on Monday after recuperating from COVID-19, which had left him gravely ill in intensive care at the peak of the coronavirus outbreak.

The United Kingdom’s COVID-19 death toll rose 621 to 28,131 as of May 1, just short of Italy, which has so far had the world’s second most deadly outbreak of the disease after the United States.

Space to play or pause, M to mute, left and right arrows to seek, up and down arrows for volume.WatchDuration: 1 minute 25 seconds1m 25s Boris Johnson thanks the National Health Service for saving his life as he battled COVID-19Singapore to begin coming out of lockdown Singapore’s migrant workers, who often live in tightly packed dorms, are the victims of the country’s second coronavirus wave.(Reuters: Edgar Su)

Singapore will start easing coronavirus restrictions over the next few weeks, authorities say, as the city-state takes the first tentative steps towards reopening its economy.

Officials say workplaces will be allowed to reopen gradually, taking into account their importance to the economy and supply chains, as well as their ability to minimise the risk of infection.

Singapore is facing the deepest recession in its 55-year history, compounded by so-called “circuit breaker” restrictions aimed at stemming the spread of the novel coronavirus that are due to last until June 1.

It has among the highest number of coronavirus infections in Asia, mainly due to outbreaks in cramped migrant-worker dormitories. It has managed to curb the spread of the disease among locals outside the dormitories.

It also reported the death of a 76-year-old man, taking the total death toll to 17.

Authorities said SafeEntry, a digital check-in system to log details of visitors and employees, will be deployed extensively across the country to help with contact tracing.

The Government said the measures could still be adjusted depending on the situation, and that people should continue to stay at home and not meet in groups.

“We’re not out of the woods,” said Lawrence Wong, who co-heads the country’s virus fighting taskforce.

Some 1,000 police officers have been dispatched in New York to enforce social distancing as warmer temperatures tempt residents to come out of quarantine.

Officers set out on foot, bicycles and cars to break up crowds and remind those enjoying the weather of public health restrictions requiring they keep appropriate distance from others.

“I believe with the warm weather people will come outside,” Governor Andrew Cuomo said.

“People will come outside and that’s great, go for a walk. But respect the social distancing and wear a mask.”

Police Commissioner Dermot Shea issued a stern warning after a series of clashes this week between police officers and members of Orthodox Jewish communities over social distancing.

“We will not tolerate it,” Mr Shea said after community members flooded the streets for funeral processions.

New York has been the epicentre of the coronavirus outbreak in the United States, where more than 1.1 million cases have been reported along with 64,943 deaths.

“The number that I watch every day, which is the worst, is the number of deaths,” said Governor Cuomo, reporting that the death rate in New York reached 299 on Saturday from 289 the day before.

“That number has remained obnoxiously and terrifyingly high.”

What you need to know about coronavirus:Space to play or pause, M to mute, left and right arrows to seek, up and down arrows for volume. The Virus: We could be in for an ‘early mark’ on physical distancing measures

Don't Miss it 23 April: Coronavirus data analysis from Australia and around the world | ABC News
Up Next The cardinal known as ‘the Pope’s ‘Robin Hood’ is helping transsexual prostitutes struggling in Italy’s coronavirus lockdown