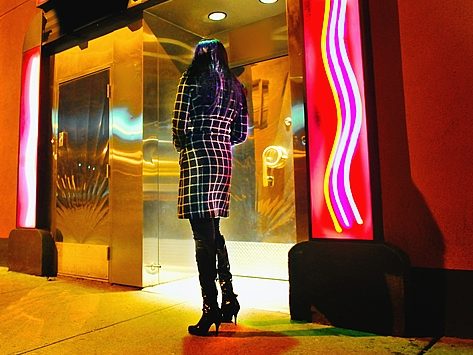 Toronto sex workers who are struggling during the pandemic can now obtain help from a fund set up to help them survive.

Since it launched in late March, they’ve raised nearly $100,000 in donations.

Local sex workers can apply for the fund and if approved, get $100 to help them with rent or pay for groceries.

“With social distancing guidelines, there are workplace closures, loss of incomes and clients,” said Maggie’s board chair Jenny Duffy. “There is also an inability to access government assistance.”

Duffy said while many sex workers are eligible for the Canada Emergency Response Benefit  (CERB) — as long as they’ve made $1,000 of income during an eligibility period — most won’t apply out of fear.

“When you’re working in a criminalized sector, it’s very scary to provide the government with banking information, employment information,” she said. “Receiving CERB means you have to file your taxes and many sex workers don’t feel safe doing that.

“The (CERB) criteria also excludes low-income sex workers who can’t meet the income requirements, but whose livelihoods have been further jeopardized by the pandemic.”

In 2014, a Supreme Court of Canada decision revised prostitution laws. The court ruled the old laws — including bans on street soliciting, brothels and people living off the avails of prostitution – were deemed to be unconstitutional as they put vulnerable women in dangerous situations.

The federal Liberals created a new law — the Protection of Communities and Exploited Persons Act — where it is now legal to sell sex, but not to buy or advertise it.

“There is a belief that sex work is decriminalized in Canada and only criminal for those who purchase it, but this is a misunderstanding because there are provisions in the Criminal Code that make workers immune from prosecution, but not from arrest,” said Duffy.

Duffy said demand for sex workers has dried up as their clients are reluctant to meet with them as they did before COVID-19 closures devastated the economy.

“For sex workers who are still trying to work, they’re at increased risk of receiving fines, jail time if they’ve found to have violated social distancing guidelines. Outdoor workers are further marginalized because there are less spaces where they’re able to meet with clients.”

Some workers who have seen such a sharp drop in business are now using food banks for the first time.

“Sex workers who were already in a precarious position are being further pushed to the margin,” said Duffy.

Migrant workers and especially Asian sex workers are facing more xenophobia and violence during this time — exacerbated by U.S. President Donald Trump labelling COVID-19 a “Chinese virus” — said Elene Lam of Butterfly. Since the pandemic, more than 500 sex workers have approached them for help, mainly from the GTA.

“Workers have different immigration status,” she said. “What we’re seeing is a lot of workers could not access any government funding and have a fear of deportation. There’s racism and bullying.”

Some workers have opted to go online and perform camming gigs and “content creation,” but that is only an option if they have the equipment.

“This work is very different than in-person sex work and involves different resources and skills,” said Duffy. “There are also safety and privacy considerations required to work online. It’s much more difficult to remain anonymous and for some workers, having their friends and family find out they’re doing sex work can really have detrimental consequences and may impact other employment after the pandemic is over.”

So far, Maggie’s has received over 200 applications.

“Even though $100 is not nearly enough to lift people out of the dire circumstances they’re in, it’s something,” said Duffy.

“This pandemic will continue to have a detrimental effect on sex workers even when it’s over because people are just going so far into debt.”

Don't Miss it How close are we to a coronavirus vaccine? – BBC News
Up Next Coronavirus News: Trump Had Two Intel Briefings in January