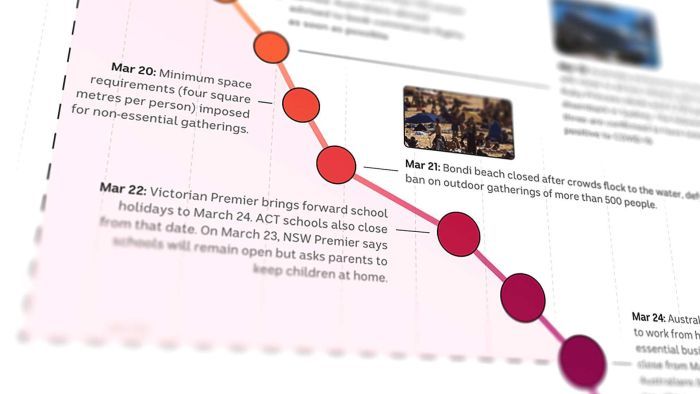 It begins like a leaky tap on the Australia Day long weekend, amid what feels like an endless summer of bushfire emergencies.

Over nearly two weeks, Australia’s confirmed cases climb to 15 as an imperceptible trickle of disease makes its way across the ocean.

Two weeks pass before the next five cases are tallied.

Then the final week of February slips by without a single diagnosis.

On February 27, Prime Minister Scott Morrison says the outbreak will become a pandemic and activates the Government’s emergency-response plan.

The next day is the last for at least two months that Australians will wake to the news that no new coronavirus infections have been confirmed on these shores.

By the time Australia records its first coronavirus death, on Day 37, confirmed cases number 28. At least one third are linked to the Diamond Princess cruise ship, which becomes a breeding ground for the virus when a former passenger tests positive and containment measures fail dismally.

More than 700 of the 3,700 passengers and crew will eventually be infected.

Australia’s first COVID-19 fatality — 78-year-old Perth man James Kwan — contracts the virus on board the Diamond Princess. He and his wife are among 180 Australians stranded on the stricken ship.

From March 13, the number of confirmed cases doubles every three days or so, surging from less than 200 to more than 2,000 within 12 days.

The chart below shows the number of confirmed cases in each country up to March 25. However, rather than tracking dates, it tracks the number of days since that country reached 100 cases. This brings all the countries onto the same timeline.

The key element is the slope of the line. The steeper the line, the faster the growth rate.

During this period, Australia’s trajectory is comparable to the US, UK or Italy.

This rapid growth gives rise to fears that Australia is only weeks behind Italy, where infections stretch into the tens of thousands and deaths number more than 7,000.

Across the nation, governments move quickly.

What begins on Day 52 with a ban on non-essential outdoor gatherings of more than 500 people, escalates rapidly from Day 54, with new restrictions announced every day for a week.

The change is profound. By the end of the week, international borders are closed. Hundreds of offices lie vacant. Classrooms and universities in some jurisdictions have been emptied of students. Non-essential businesses have been shuttered.

Yet still the infection seeps through the cracks.

On Day 55, the Ruby Princess cruise ship docks at Sydney’s Circular Quay and 2,700 passengers and crew disembark. The following day, NSW Health Minister Brad Hazzard confirms three people on the ship have tested positive to COVID-19 — a number that will skyrocket to nearly 700 roughly one month later.

The outbreak on the ill-fated ship will eventually become subject to a criminal investigation. By April 22, at least 20 deaths and 696 confirmed cases — one in 10 of Australia’s known cases at the time — have been traced back to the ship.

The fallout may be orders of magnitude worse in Tasmania, an epidemiological investigation will later find.

According to the investigation’s interim report, the Ruby Princess becomes the likely origin of up to two-thirds of Tasmania’s known cases when two passengers are admitted as patients to the state’s North West Regional Hospital.

These two cases will eventually engender a cluster of more than 120 infections, including 11 deaths.

“No-one is denying that something went drastically wrong with how [the Ruby Princess] was handled,” says Hassan Vally, an infectious disease epidemiologist and associate professor in public health at La Trobe University.

“It was pretty odd, given the context of a global pandemic and that these people were arriving from overseas … It was a very unfortunate decision.”

We don’t know it yet, but the nation is turning a corner.

By the time Easter rolls around, cases are taking more than a month to double.

With Australia’s international borders all but closed and all overseas arrivals mandated to 14 days in quarantine, overseas-acquired infections plummet.

“What it immediately did was eliminate more than two-thirds of the route of transmission by which the virus was being introduced.”

“Italy ended up in the position it did because the first identified cases were people with no recent travel history … and that indicated there was already widespread community transmission.”

“You’ve got to look not just at the numbers, but at what’s driving those numbers,” he says.

Other key differences were Australia’s widespread testing and the severity of cases detected, says Katherine Gibney, an epidemiologist and infectious diseases physician at the Doherty Institute.

“In Italy and the US, the first cases diagnosed were severe or fatal, whereas we were diagnosing mild cases,” she says.

This suggests Australia was detecting “most or all” coronavirus cases very early on. “These other countries were detecting just the tip of the iceberg.”

However, it is “a bit overconfident” to say Australia could not have followed in the footsteps of Italy, the UK or the US, Dr Gibney says.

“The thing about public health is that it prevents cases, and it’s almost impossible to count or quantify what you’ve prevented.

“I certainly think we could have been like that. These are first-world countries that are quite comparable to Australia.”

La Trobe University’s Dr Vally says it’s hard to disentangle which interventions were the most useful, given a whole raft of measures were introduced at the same time.

“There’s no doubt that whilst the border controls were really, really important, social distancing and handwashing were also a vital part of this response. If we had 100,000 people going to the MCG every weekend, we would be in a disastrous situation.”

By Day 77, recoveries outnumber current infections by about 120 cases.

On Day 86, the daily tally of new cases sinks below 20 and stays there despite a massive expansion of the testing regime.

By Day 92, active cases have dipped below 100 in Victoria, Queensland, WA and South Australia, and below 10 in the ACT and the NT.

However, the gains are not evenly spread.

As a result of the north-west outbreak, Tasmania overtakes NSW to become the state with the most confirmed COVID-19 cases per capita.

By May, locally spread infections in Tasmania make up nearly two-thirds of all confirmed cases.

It is the only state where locally acquired infections outnumber cases imported from overseas.

Across Australia, aged care residents account for more than one in five deaths. Almost all the deaths are clustered in two Sydney facilities.

Of the 22 deaths among aged care residents by May 2, 14 are at Anglicare’s Newmarch House in Sydney’s west and seven are from Dorothy Henderson Lodge in Sydney’s northwest.

Both outbreaks begin when staff members work while unknowingly infected with the virus.

Australia’s battle against the virus is far from over, especially in these communities. But as some lockdown laws are relaxed and parts of the nation emerge, blinking, into the sunlight, many are pondering the same question: Is the worst behind us?

“It’s a really fine line between responding quick enough to avert a disaster and not. Just by a matter of days you can lose control over a virus like this because of that exponential growth,” says La Trobe’s Dr Vally.

He and Doherty Institute’s Dr Gibney are among numerous public health experts who have warned of a potential second wave as Australia heads into flu season with an almost entirely susceptible population.

“As we’ve seen in places like Singapore, things can change very quickly … The worst thing we can do is think we’ve won the game,” he says.

However, he remains optimistic the unprecedented nature of the COVID-19 pandemic will have lasting impacts, hopefully for the better.

“When you look at the history of these pandemic events, they change society forever. These are cataclysmic events,” he says.

Sydney University’s Dr Kamradt-Scott says the pandemic has created an opportunity “to reconsider how we want our society to operate and what we value as a society”.

“I think humans have an innate desire to want to forget the trauma they’ve experienced. And this has been traumatic on a number of levels,” he says.

“My fear is that in the process of trying to move past the trauma, we will forget the experience and the lessons of the pandemic.

“But this is one instance where I would love to be proven wrong.”