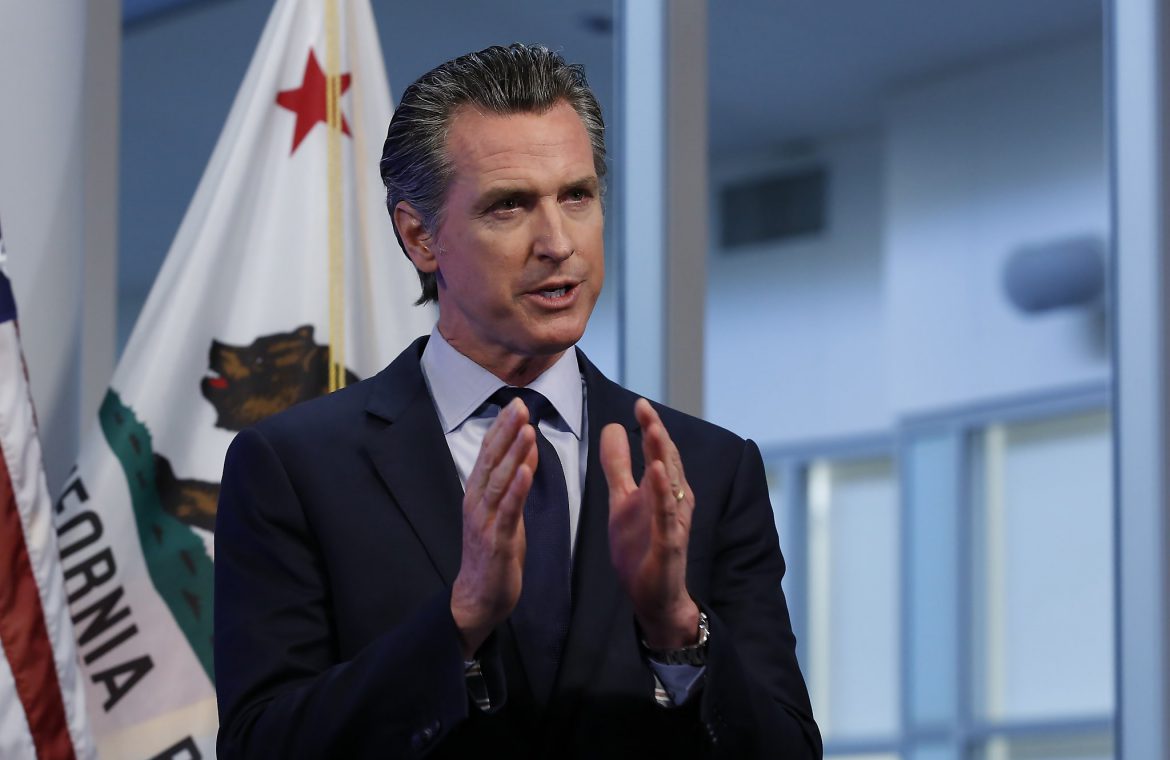 SACRAMENTO — California retailers can begin to reopen their businesses to curbside pickup as soon as the end of this week, Gov. Gavin Newsom said Monday, while some regions of the state with few coronavirus cases will be able to go even further in loosening restrictions on public life.

“We are entering into the next phase,” Newsom said at a news conference. “This is a very positive sign, and it is happening for only one reason: The data says it can happen.”

It may be a while, however, before the Bay Area takes those steps. Six Bay Area counties are under a stay-at-home order through the end of May that is separate from the state’s shutdown, and Newsom said such counties could keep their stricter rules in place past Friday if they choose.

“We are not preempting their guidelines,” he said. “We will still allow them to move forward.”

Representatives of several Bay Area counties said they were reviewing Newsom’s announcement and considering whether they felt comfortable easing some restrictions on businesses based on their local health data.

San Francisco Mayor London Breed said she was was “really excited about it and we want to see people get back to work especially, but we want to do it responsibly.” She said she could not guarantee that it would happen by Friday.

“If there is a way to accomplish the public health goal of keeping people safe with also allowing businesses to operate, but to operate differently with certain guidelines, I think that we can definitely work together to achieve that goal and get to a better place,” Breed said.

Contra Costa County plans “to stick to tracking progress” on key public health indicators before relaxing the stay-at-home order it issued along with five other counties and Berkeley, “which will be in place through the end of May,” said Contra Costa public health spokesman Will Harper.

Newsom said he would put out guidelines that stores across the state could adopt to sell clothing, books, music, toys, sporting goods and flowers again starting Friday. Those guidelines will not be unveiled until Thursday, but Newsom said they would include providing curbside pickup rather than allowing customers back into stores.

Manufacturers and suppliers for retailers that can begin curbside service will also be eligible to resume operations Friday, Newsom said.

Shopping malls, dine-in restaurants and office buildings will stay closed for now. However, counties will soon be able to ask the state for permission to reopen restaurants and some other businesses on a local basis.

The governor said he would emphasize a regional approach to restarting the economy. That’s something that a number of mostly rural counties have sought in their eagerness to reopen faster than allowed under the indefinite statewide stay-at-home order Newsom put in place in March.

Gov. Gavin Newsom says that some retail stores will be able to reopen for curbside service Friday and that in some areas, officials will soon be able to seek state approval to go further. Details on reopening guidelines will be released Thursday.

Opening: Businesses that will be able to open include clothing stores, bookstores, sporting goods stores and florists. Manufacturers and suppliers of those goods can also resume with modifications to their operations.

But:Places with stricter stay-at-home orders, such as the Bay Area, can keep their rules in place. If they do, stores will remain closed, even if other regions open up.

Still closed: Not eligible for reopening Friday under the new state rules are offices, shopping malls and dine-in restaurants.

But: Counties can soon begin applying to the state to reopen some of those businesses. Newsom said the counties will have to show they have few COVID-19 cases, that they meet testing and contact tracing criteria that the state will establish, that their health care systems can handle any surge in cases, and that they have plans to protect vulnerable populations.

Modoc County, in the northeastern corner of the state, acted on its own last week, giving restaurants, bars, hair salons, movie theaters, churches and shops permission to reopen in defiance of Newsom’s order. Sutter and Yuba counties, north of Sacramento, allowed a narrower reopening on Monday.

Newsom said his administration would work with those counties to bring them into compliance with his criteria to reopen. He said he was “very impressed” with the social distancing requirements they had maintained, including extending a stay-home recommendation for seniors, who are at risk of the most severe health effects of the coronavirus.

“That’s the spirit of what we’re looking for. We just need a more formal process,” Newsom said. “A lot of that work is already being done. Some were ‘ready, fire, aim’ as opposed to ‘ready, aim, fire.’ But we’ll work with them.”

Other counties in California that have low rates of infection, including Stanislaus and San Luis Obispo, have similarly expressed interest in beginning a faster reopening of their economies.

Newsom said the state public health director will decide whether to let counties reopen more widely based on their plans to test for the virus and trace its spread, their guidelines for physical distancing and sanitation at businesses, and how they will protect the most vulnerable residents.

Representatives for rural counties said Newsom was listening to their demands for flexibility.

“We’re not going to wait for San Francisco and Los Angeles in order to reopen,” Republican Assemblyman James Gallagher, whose district includes Yuba and Sutter counties, said in a statement. “Our local small business owners deserve a sigh of relief and shouldn’t have to worry about the heavy hand of state government cracking down on them.”

California had reported more than 55,700 confirmed coronavirus cases and 2,253 deaths as of Monday. But Newsom said weeks of stability in the number of hospitalizations and intensive care patients, and the fact that hospitals have not been overwhelmed, indicated the state was ready to move toward reopening the economy.

The state also reached its goal of averaging more than 25,000 daily coronavirus tests over the past week, Newsom said, though that rate will ultimately need to reach 60,000 to 80,000 to allow for a full reopening.

The governor announced a partnership with UCSF and UCLA to train up to 3,000 people a week to trace the contacts of coronavirus patients, so the state can isolate and quarantine those who may have been exposed to the virus. Newsom said he ultimately plans to add 20,000 new contact tracers.

“This is all foundational so we can more quickly move to modify our stay-at-home order,” he said.

Don't Miss it Coronavirus live news: WHO and Five Eyes reject Chinese lab theory as global deaths pass 250,000 | World news
Up Next UK on track to be the European country worst-hit by coronavirus | 7.30