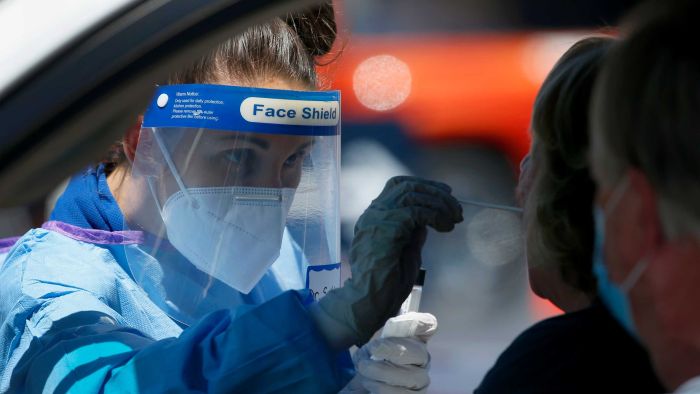 US President Donald Trump says the nation plans to release a report on the origin of coronavirus, while lockdown in Russia leads to a doubling of domestic violence cases.

New York state is now reporting more than 1,700 previously undisclosed deaths at nursing homes and adult care facilities as the state faces scrutiny over how it’s protected vulnerable residents during the coronavirus pandemic.

At least 4,813 residents with confirmed or presumed cases of COVID-19 have died at 351 of New York’s 613 nursing homes since March 1, according to Governor Andrew Cuomo’s administration’s new list.

Nursing home residents have made up roughly one-fourth to one-fifth of the state’s official tally of fatalities.

It comes as US President Donald Trump said the United States would release its report detailing the origins of the novel coronavirus over time, but gave no other details or timeline.

Mr Trump initially praised China over its response to the outbreak but has since blamed Beijing for the way the pandemic has gripped the world.

Mr Trump was speaking to reporters outside the White House before leaving on a trip to an aerospace facility in Arizona that is making protective face masks, as the state partially lifts its shutdown of businesses to stem the coronavirus pandemic.

Mr Trump has declined to wear a mask despite White House guidelines urging people to do so, but suggested he could this time.

“If it’s a masked facility, I will” wear a mask, he said.

New York will work with the Bill & Melinda Gates Foundation to  “reimagine” the state’s school system in the wake of the coronavirus pandemic, part of a broader reform of society, Governor Andrew Cuomo told a daily briefing on Tuesday (local time).

Governor Cuomo also pushed back against comments by President Donald Trump, who in an interview with the New York Post dismissed the idea of giving federal funds to states financially crippled by the crisis, saying it would amount to bailing out Democratic governors who had mismanaged their states.

Calling on Mr Trump to take a non-political approach, Governor Cuomo said blocking funds to states hit hardest by the pandemic would prove to be “self-defeating” because it would lead to gridlock in Congress and hold back key engines of economic growth.

Governor Cuomo has estimated New York was facing a $US10 to $US15 billion ($15 to $23 billion) budget shortfall.

“If you starve the states, how do you expect states to fund this entire reopening plans,” he said. “If you go down this path of division you will defeat all of us.”

Governor Cuomo also spoke about rebuilding the healthcare system so it can better handle future crises and laid out a broad vision for improving society, noting reforms made after the September 11, 2001 attacks and Hurricane Sandy in 2012.

The number of domestic violence cases in Russia grew two and a half times during the lockdown the Government ordered to stem the spread of the coronavirus, Russia’s human rights ombudswoman said on Tuesday.

Complaints and reports made to Russian non-governmental organisations spiked from roughly 6,000 in March to more than 13,000 in April, human rights ombudswoman Tatyana Moskalkova said.

“The picture is rather non-optimistic,” the RIA Novosti news agency quoted her as saying.

Domestic violence is rampant in Russia and according to police data, up to 40 per cent of all violent crimes are committed within families.

Russian lawmakers in 2017 decriminalised simple assault against family members, and human rights advocates say the move encouraged abusers and made it much harder to protect victims of domestic violence.

Domestic violence is not the only thing on the rise in Russia, which for the third straight day reported over 10,000 new cases of coronavirus.

Government-backed hackers are attacking healthcare and research institutions in an effort to steal valuable information about efforts to contain the coronavirus outbreak, Britain and the United States said on Tuesday in a joint warning.

The attacks were likely parts of efforts by hackers to “obtain intelligence on national and international healthcare policy or acquire sensitive data on COVID-19 related research”, the agencies said.

The NCSC and CISA did not say which countries were responsible for the attacks. But one US official and one UK official said the warning was in response to intrusion attempts by suspected Chinese and Iranian hackers, as well as some Russian-linked activity.

The two officials spoke on condition of anonymity to discuss non-public details of the alert. Tehran, Beijing and Moscow have all repeatedly denied conducting offensive cyber operations and say they are the victims of such attacks themselves.

Tour de France back in doubt

There is no guarantee that the Tour de France will go ahead this year due to the COVID-19 crisis, French Sports Minister Roxana Maracineanu said on Tuesday [local time].

The Tour, cycling’s biggest event of the year, has been rescheduled to August 29–September 20. With crowd-drawing events being banned in France until the end of August, special arrangements might have to be made for the start of the Tour in Nice, the sports ministry said.

“Many people are begging me to keep the Tour even behind closed doors,” Ms Maracineanu told French Television.

“I hope it will take place but I am not sure. We do not know what the epidemic will be like after lockdown.”

France’s lockdown, in place since March 17, will be partially lifted on Monday, although the seasons of several sports championships, including soccer’s Ligue 1 and rugby’s Top 14, have already been abandoned.

Ms Maracineanu added that the Tour and tennis’s rescheduled French Open, expected to start on September 20, could be held behind closed doors should the ban on popular events be extended.

“The Roland Garros stadiums have many seats to fill, having it be played behind closed doors would be the worst solution but we would do it if the survival of those sports was at stake,” she said.

Coronavirus cases in Asia rose to a quarter of a million on Tuesday, according to a Reuters tally, driven by outbreaks in Singapore, Pakistan and India, even as China, South Korea and Japan significantly slowed the spread of the disease.

It has taken Asia almost four months to reach the 250,000 infection milestone, a level that Spain alone is approaching just a little over two months since reporting its first case.

Asia now accounts for just 7 per cent of global cases, compared with 40 per cent for Europe and 34 per cent for North America, although experts worry that unreported infections are masking the true extent of the pandemic.

Infection may cause only mild symptoms and not everyone with symptoms is tested, while most countries only record hospital deaths, meaning deaths in private homes and nursing homes have not yet been included.

The death toll in Asia has also slowed significantly in most countries and is now nearing 10,000 for the region as a whole, representing just 4 per cent of global deaths. Europe accounts for 57 per cent and North America for 29 per cent. By comparison, Spain, Italy, the United Kingdom and France have all recorded more than 25,000 deaths each.