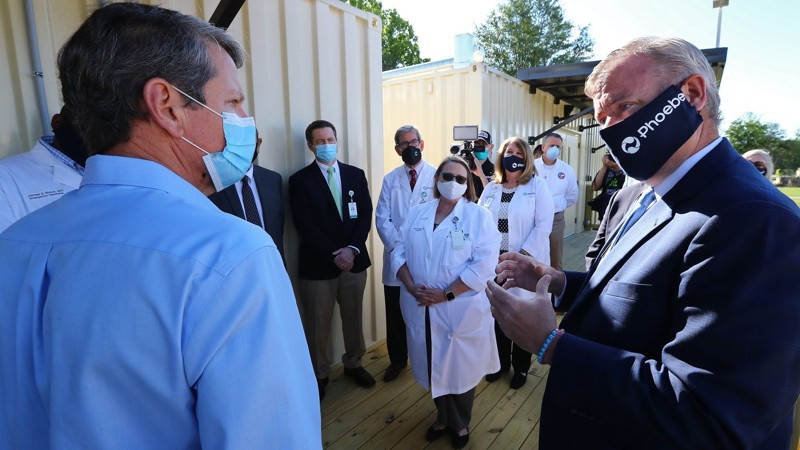 A new coronavirus hot spot has emerged in northeast Georgia, stirring fears the region could see the devastating human toll already experienced in the state’s opposite corner.

The number of new cases in the Gainesville area increased exponentially each week during April, according to state data. By Tuesday, nearly four dozen patients had died in the area’s dominant hospital system.

State officials are setting up a mobile hospital and sending in reinforcements: as many as 100 physicians, nurses and other health care professionals.

“They’re being strained pretty hard up there at the moment,” Gov. Brian Kemp said Tuesday. He spoke in Albany, the center of what has been Georgia’s most concentrated outbreak of COVID-19, the disease caused by the new coronavirus, and said he hopes lessons from that region will help avert catastrophe across the state.

“We’re doing a lot of things that we did here (in Albany) in Gainesville,” Kemp said. “Because of what we learned going through this first, it has really better prepared us.”

In Albany and surrounding communities in southwest Georgia, many of them sparsely populated, the coronavirus has killed at least 220 people.

The Gainesville outbreak, which has spread into neighboring Habersham County, is another indicator that the coronavirus is far from contained in Georgia. A report to the White House by the federal Centers for Disease Control and Prevention showed that in much of Georgia, including its northeast corner, confirmed cases of the virus continue to increase or, at best, have leveled off on a high plateau.

On Tuesday, a new model by researchers at the University of Washington contained its starkest projection yet for Georgia: as many as 4,913 COVID-19 deaths by early August. The projection shows deaths continuing to increase at a steady pace well into July.

The Institute for Health Metrics and Evaluation’s model has been widely cited in news reports and by federal officials. Its latest update came after Kemp lifted a shelter-in-place order for most Georgians and allowed many businesses to reopen after being shuttered for a month or longer. Many public health experts worry that easing social and commercial restrictions could result in substantially more illnesses and deaths.

Georgia’s death toll from the virus stood at 1,294 on Tuesday evening, up by 51 from 24 hours earlier. During each of the past seven days, the total number of deaths climbed by an average of 43, according to state data.

Almost 30,000 Georgians have tested positive for the coronavirus.

Hall County, which includes Gainesville, has seen a dramatic increase in confirmed cases in the past five weeks. During the week of March 29, the county recorded 86 new cases, or 12 a day. The daily average increased to 22 the following week, then 47 and then 61. Last week, Hall confirmed 662 new cases, or 95 a day — more than a seven-fold increase in five weeks.

At least 26 people have died in Hall County and 11 in Habersham, according to the Georgia Department of Public Health. The four hospitals operated by Northeast Georgia Health System, based in Gainesville, have reported 45 deaths.

The hospital system ran a robust testing program, beginning in March, spokesman Sean Couch said. And even before the number of new cases began multiplying, officials suspected the area would be hit hard. Computer models suggest the staffs at the system’s facilities would be working beyond their capacity by late May, a situation likely to result in more patient deaths.

The system’s hospitals in Gainesville and Braselton added intensive care beds, Couch said, but “if you don’t have enough quality critical-care staff to staff those beds appropriately, it doesn’t matter how many beds you have.”

The state has dispatched about half of a promised 100 professionals to temporarily staff the hospitals, and the 20-bed mobile hospital is expected to be in operation later this month.

“It’s an investment, for sure,” Kemp said in Albany on Tuesday. “We know that this isn’t going away any time soon. … So whatever happens in the fall, or until we get a vaccine, it will help us continue to be ready.”

Couch said northeast Georgia hopes to avoid the fate of southwest Georgia, where the virus swept through several counties with little warning.

“We’ve had time to observe what went on there, to proactively plan,” Couch said. “We need to plan for the worst and hope for the best.”

In Hall County, the virus has disproportionately affected Latinos, who account for about half the positive cases but less than one-third of the population. Couch said the hospital system’s analysis shows that economic status also affects whether individuals contract the virus. However, he said there is no evidence that an unusual number of cases are tied to the area’s poultry processing plants, where a significant part of the workforce is Latino.

But Maria Palacios, an activist for Latino workers in Gainesville, said conditions in poultry plants and their employees’ economic status can contribute to the virus’ spread.

“You have people working in large open production spaces where people are literally standing elbow to elbow in the same spot all day,” Palacios said. But “people are willing to go in sick to work because their financial obligations are overwhelming.”

Your subscription to the Atlanta Journal-Constitution funds in-depth reporting and investigations that keep you informed. Thank you for supporting real journalism.