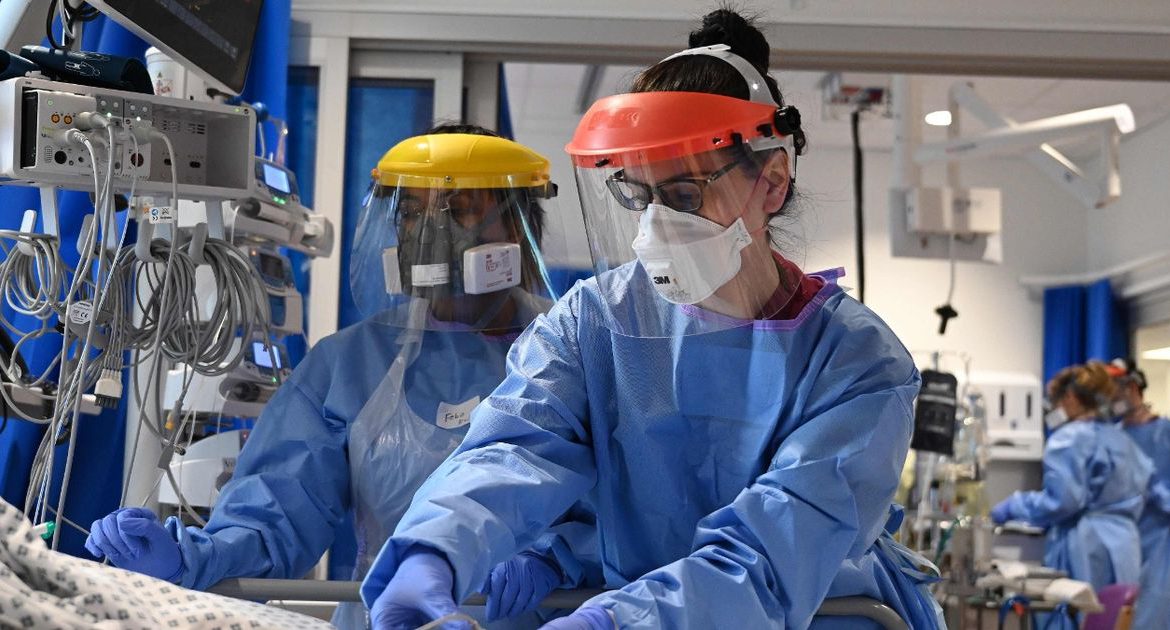 The UK’s coronavirus hospital death toll has increased to 25,214 after 449 more fatalities were reported – the lowest daily rise on a Wednesday since late March.

Britain’s overall toll is much higher than reported as new figures show that just under 33,000 deaths involving Covid-19 have now been registered across the UK, the highest total in Europe and the second highest in the world behind only the US.

The latest figures were announced after Prime Minister Boris Johnson said lockdown measures will start to be lifted on Monday “if we possibly can”, and Health Secretary Matt Hancock warned there is “no guarantee” a vaccine will be found.

So far, 32,898 deaths in all settings have been registered in the UK where Covid-19 was mentioned on the death certificate, including suspected cases.

With the UK past its peak and deaths trending down, the National Records of Scotland (NRS) said a total of 2,795 fatalities had been recorded in that country as of May 3.

It follows totals from the Office for National Statistics that showed 29,710 deaths had been registered in England and Wales up to May 2.

The latest available figures from the Northern Ireland Statistics and Research Agency, published last week, showed 393 deaths there up to April 29.

The Government’s official death toll, announced on Tuesday, was 29,427 in all settings.

NHS England has announced 331 new deaths of people who tested positive for Covid-19, bringing the total number of confirmed reported deaths in hospitals in England to 22,049.

Of the 331 new deaths announced today:

The figures also show 28 of the new deaths took place on May 1-2, 84 took place in April, while the remaining 16 deaths occurred in March, with the earliest new death taking place on March 13.

The UK is in the seventh week of its coronavirus lockdown
(Image: SWNS)

Street art by an artist known as Rebel Bear in Glasgow
(Image: PA)

The figures published today by NHS England show April 8 continues to have the highest number for the most hospital deaths occurring on a single day, with a current total of 874.

A total of 1,703 patients have died in Scotland after testing positive for coronavirus, up by 83 from 1,620 on Tuesday, First Minister Nicola Sturgeon said.

The figures are lower than the 2,795 deaths given earlier by the NRS as they do not include suspected and probable coronavirus infections.

Speaking in the Scottish Parliament, the First Minister said 12,709 people have now tested positive for the virus in Scotland, up by 272 from 12,437 the day before.

The NRS said Scotland’s weekly death toll had fallen for the first time.

Of those registered between April 27 and May 3, 59% were in care homes, 37% were in hospitals and 4% were in homes or elsewhere.

Tolls increase to 1,044 in Wales and 418 in Northern Ireland

Shoppers wear masks as they queue to enter a Sainsbury’s in Bristol
(Image: Tom Wren SWNS)

Public Health Wales said a further 95 people had tested positive for Covid-19, bringing the total number of confirmed cases to 10,764.

Dr Giri Shankar, from Public Health Wales, said: “With the upcoming May Day bank holiday, Public Health Wales reminds the public to continue to adhere to Welsh Government’s restrictions on non-essential travel, caravan and campsites, hotels, B&Bs and holiday accommodations, as well as the limited access to our national parks.

“We also remind owners of second homes in Wales to act responsibly and to avoid travelling to these homes until restrictions have been lifted.”

A total of 3,934 cases of the virus have been confirmed.

Government to begin easing lockdown as early as Monday

The figures were revealed after Mr Johnson made his first Commons appearance since recovering from coronavirus and faced new Labour leader Sir Keir Starmer for the first time at Prime Minister’s Questions.

Mr Johnson said: “I’d like to pay tribute today to the 107 NHS and 29 care workers and all those who have sadly died from coronavirus.

“I know the sympathies of the House are with their family and friends.”

The coronavirus lockdown is a worrying time for millions across the UK.

But it’s also bringing out the best in people who are selflessly giving their time each day to help those most in need.

Our Mirror Coronavirus Heroes series wants to recognise all of those helping the most vulnerable during the crisis.

Whether it’s a local business going the extra mile for the community or a teenager helping an elderly neighbour, we want to hear about it.

You can email your stories of Mirror Coronavirus Heroes to webnews@mirror.co.uk.

The Prime Minister said the Government will begin lifting lockdown restrictions as early as Monday, when the UK would be entering its eighth week under strict measures, if it is safe to do so.

Mr Johnson is expected to outline the strategy for easing the measures in an address on Sunday.

He warned it would be an “economic disaster” to relax the lockdown in a way which triggered a second spike in coronavirus cases.

He also said he “bitterly” regrets the epidemic in care homes as he set a goal of reaching 200,000 tests a day by the end of May.

Pressed on the UK’s death toll, which is the highest in Europe and second highest in the world behind only the US, Mr Johnson said the figures were “appalling”, adding: “At this stage I don’t think international comparisons and the data is yet there to draw all the conclusions that we want.”

He said there will be a time when the Government will look at whether it could have done things differently, and described personal protective equipment (PPE) shortages as “enraging” but pledged to increase the supply.

As for deaths in care homes, which have been exceeding deaths in hospitals, Mr Johnson said there had been a “palpable improvement” in recent days.

More than 6,000 people have died in care homes, according to the most recent figures.

Scarecrows dressed as doctors, key workers and a patient on a farm in Billinge, Merseyside
(Image: REUTERS)

Customers practice social distancing in a queue outside a B&Q in Nottingham
(Image: Tom Maddick/SWNS)

The Prime Minister also said contact tracing was stopped in mid-March as the transmission of coronavirus from individuals in the UK meant that “it exceeded out capacity”.

Earlier, Mr Hancock took part in a Q&A session on Sky News where warned there was “no guarantee” a vaccine for coronavirus will be found.

If the race to develop one is a failure, he added “then we have to learn to find a way to live with” and suppress the virus.

He rejected claims the Government had sacrificed people in care homes in order to protect the NHS during the pandemic.

But he acknowledged that a lack of capacity meant it had not been possible to test everyone leaving hospitals for Covid-19 before they went into a care home.

He also said it is too soon to say when schools are able to return and cafes may be able to reopen in the summer months if they can provide outdoor facilities.

In other developments, Heathrow is to begin temperature screening of passengers, several weeks after the measure was deployed by many other major airports around the world.

Major airports in Asia and the US started screening passengers for a fever in January as the virus rapidly spread around the world.

A charity appeal to support NHS staff, volunteers and patients during the pandemic has raised £100 million – with almost a third coming from the efforts of Captain Tom Moore.

Money has been used for a range of causes, including buying tablet computers so people in hospital can see their loved ones virtually, and to set up “wobble rooms” where staff can take a much-needed break during long shifts.

Don't Miss it Coronavirus tests and masks sold by fraudsters online – BBC News
Up Next Donald Trump’s coronavirus task force is winding down, but it’s not ‘mission accomplished’