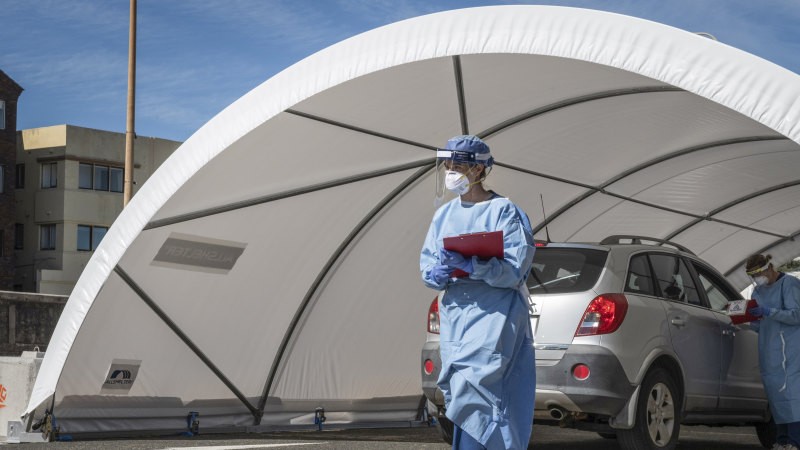 Patients need to specifically inquire with St Vincent’s in order to obtain results if they did not receive them for any reason. The hospital says this is communicated to patients in a pamphlet during the test process and outlined to them verbally.

“At the point of testing, our nurses advise patients at our Bondi and east Sydney testing clinics to wait up to 72 hours for their test results. If they still haven’t heard back, they are advised to contact the hospital switchboard and request to be put through to the St Vincent’s COVID hotline,” a spokesman for St Vincent’s Hospital said.

The hospital said the Bondi pop-up clinic has conducted more than 7000 tests and the human error factor was extremely low.

NSW Health would not comment on patients not being referred to the correct channels after calling the hotline.

Leichhardt resident Daniel Heide, 41, visited the Bondi clinic on April 6 after experiencing severe flu-like symptoms. After not hearing back for a week, Mr Heide contacted NSW Health and he said they did not refer him to St Vincent’s.

“They told me it was probably negative and couldn’t tell me definitely,” he said.

Mr Heide posted in local community groups to see if anyone had a similar experience and was told others had also contacted NSW Health for results to no avail.

After St Vincent’s were made aware of this, they were able to locate Mr Heide’s test and informed him on Wednesday he was negative. He said he was extremely grateful for the work the testing clinics were doing but was concerned after not receiving a result.

“It’s been lost, I think, in that link between the NSW Health hotline and the hospital a little bit,” he said.

Sydney resident Justine Autour was left puzzled after leaving her number with a staff member at NSW Health who failed to follow up on her results.

Ms Autour contacted both state and federal COVID-19 hotlines, both of which did not redirect her to St Vincent’s. She was tested at the Bondi clinic on April 3 and received her tests results on Wednesday.

“Looks like my number was transcribed badly from clinic papers to whatever the text system is,” Ms Autour said. “And then it looks like for the NSW number I called, and they just didn’t follow up.”

Writer Dom Knight took to Twitter in frustration after visiting a pop-up clinic in Rozelle but was able to find his results, which were processed by Royal Prince Alfred Hospital, after a number of calls to both federal and state departments.

Mr Knight was told by NSW Health he did not receive his results due to a problem with the SMS notification system, a problem the department told the Herald it is not aware of.

Sarah is a journalist for The Sydney Morning Herald.

Don't Miss it UK’s coronavirus lockdown was ‘futile and hasn’t saved any lives’, claim leading experts – The Sun
Up Next Treating covid-19 – Two potential therapies for covid-19 have some effect | Science & technology