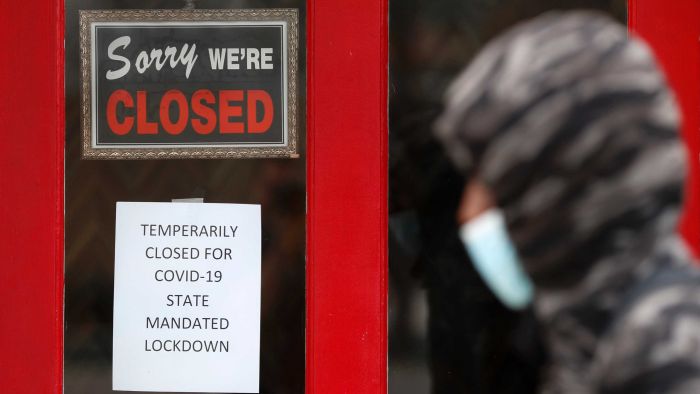 The US economy lost a staggering 20.5 million jobs in April, the steepest plunge in payrolls since the Great Depression and the starkest sign yet of how the novel coronavirus pandemic is battering the world’s biggest economy.

Key points:US jobless rate surged to an historic 14.7 per cent, up from just 4 per cent in a month5 million Americans had their hours reduced as underemployment reached a record highPresident Donald Trump said job losses were not surprising and they would be back “very soon”

The bleak numbers strengthen analysts’ expectations of a slow recovery from the recession caused by the pandemic, adding to a pile of dismal data on consumer spending, business investment, trade, productivity and the housing market.

The report underscores the devastation unleashed by lockdowns imposed by states and local governments in mid-March to slow the spread of COVID-19, the respiratory illness caused by the virus.

“Our economy is on life support now,” said Erica Groshen, a former commissioner of the Bureau of Labor Statistics and now a senior extension faculty member at the Cornell University School of Industrial and Labor Relations.

“We will be testing the waters in the next few months to see if it can emerge safely from our policy-induced coma.”

Coronavirus update: Follow all the latest news in our daily wrap.Lost jobs will be ‘back very soon’, Trump says Mr Trump said it was no surprise jobs were lost during the crisis.(Reuters: Kevin Lamarque)

After the Trump administration was criticised for its initial reaction to the pandemic, President Donald Trump has been eager to reopen the economy, despite a continued rise in COVID-19 infections and dire projections of deaths.

“It’s fully expected, there’s no surprise … even the Democrats aren’t blaming me for that,” Mr Trump said when asked about the “terrible” job figures in an interview with Fox News.

“Those jobs will all be back, and they’ll be back very soon.”

A homeless encampment under a freeway overpass in the US, where unemployment has reached historic levels.(AP: Ben Margot)

The Government’s report noted that many people who lost jobs in April but did not look for another one were not even counted in the unemployment rate.

The impact of those losses was reflected in the drop in the proportion of working-age Americans who have jobs — just 51.3 per cent, the lowest on record.

In addition to the millions of newly unemployed, 5.1 million others had their hours reduced in April.

That trend, too, means less income and less spending, perpetuating the economic downturn. A measure of underemployment — which counts the unemployed plus full-time workers who were reduced to part-time work — reached 22.8 per cent, a record high.

Though millions of Americans continue to file claims for unemployment benefits, April could mark the trough in job losses.

More small businesses are accessing their portion of an almost $US3 trillion ($3.6 trillion) fiscal package, which made provisions for them to get loans that could be partially forgiven if they were used for employee salaries.

The Federal Reserve has also thrown businesses credit lifelines and many states are also partially reopening.

Companies like Walmart and Amazon are hiring workers to meet the huge demand in online shopping.

Truck drivers are also in demand, while supermarkets, pharmacies and courier companies need workers. Still, economists do not expect a quick rebound in the labour market.

“Given the expected shift in consumer behaviour reflecting insecurities regarding health, wealth, income, and employment, many of these firms will not reopen or, if they do reopen, hire fewer people,” said Steve Blitz, chief economist at TS Lombard in New York.

“This is one reason why we see the underlying recession extending through the third quarter.”

The National Bureau of Economic Research, the private research institute regarded as the arbiter of US recessions, does not define a recession as two consecutive quarters of decline in real gross domestic product, as is the rule of thumb in many countries. Instead, it looks for a drop in activity, spread across the economy and lasting more than a few months.

What you need to know about coronavirus:Space to play or pause, M to mute, left and right arrows to seek, up and down arrows for volume.WatchDuration: 6 minutes 55 seconds6m Concerns that the JobKeeper scheme is not working as intended

Don't Miss it Coronavirus: Learn how Wuhan dealt with the lockdown – BBC News
Up Next Trump says coronavirus will ‘go away without a vaccine’