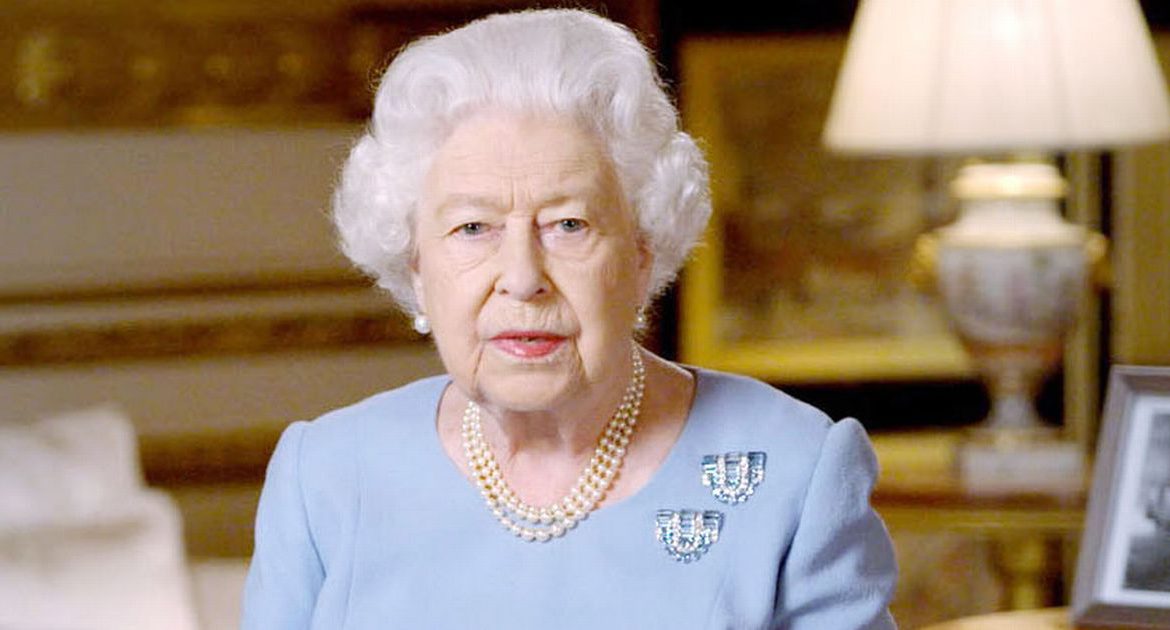 Queen Elizabeth II tonight delivered a powerful address to the nation on the anniversary of VE Day – just like her own father did 75 years ago.

The monarch praised the country’s “love and care” on show in the difficult coronavirus lockdown.

In just her sixth televised address during her 68-year reign, the Queen said the “brave soldiers, sailors and airmen” of Second World War would be proud of the heroes protecting lives in these unprecedented times.

Before the Queen’s speech, a video was played to the nation of her father King George VI making his VE address.

He said: “Let us remember the men of all the services and the women in all of the services who have laid down their lives. We have come to the end of our tribulation and they are not with us at the moment of our rejoicing.”

The Queen sits in the White Drawing Room beside a photo of her father King George VI
(Image: Buckingham Palace / Handout)

And the Queen, who is 94, largely echoed this message.

Speaking in the White Drawing Room at Windsor Castle, where the monarch is isolating with Prince Philip, 98, Her Majesty proudly displayed a photograph on her desk of her father in his Admiral of the Fleet uniform with RAF Wings.

“I speak to you today at the same hour as my father did, exactly 75 years ago,” she said.

“His message then was a salute to the men and women at home and abroad who had sacrificed so much in pursuit of what he rightly called a ‘great deliverance’.

“The war had been a total war; it had affected everyone, and no one was immune from its impact. Whether it be the men and women called up to serve; families separated from each other; or people asked to take up new roles and skills to support the war effort, all had a part to play. At the start, the outlook seemed bleak, the end distant, the outcome uncertain.”

Behind her on a separate table could be seen a photograph of teenage self with her father, mother and sister together with Winston Churchill on the balcony of Buckingham Palace on VE Day, Tuesday May 8, 1945.

As a teenager who had joined the Auxiliary Territorial Service (ATS) at the age of 18 in 1945, the monarch recollected how she mischievously escaped the confines of the palace with her sister Margaret to rejoice in the streets, while honouring the sacrifice of those that gave their lives.

The Queen added: “We kept faith that the cause was right – and this belief, as my father noted in his broadcast, carried us through.

“Never give up, never despair – that was the message of VE Day. I vividly remember the jubilant scenes my sister and I witnessed with our parents and Winston Churchill from the balcony of Buckingham Palace.

“The sense of joy in the crowds who gathered outside and across the country was profound, though while we celebrated the victory in Europe, we knew there would be further sacrifice. It was not until August that fighting in the Far East ceased and the war finally ended.

“Many people laid down their lives in that terrible conflict. They fought so we could live in peace, at home and abroad. They died so we could live as free people in a world of free nations. They risked all so our families and neighbourhoods could be safe. We should and will remember them.

“As I now reflect on my father’s words and the joyous celebrations, which some of us experienced first-hand, I am thankful for the strength and courage that the United Kingdom, the Commonwealth and all our allies displayed.

“The wartime generation knew that the best way to honour those who did not come back from the war, was to ensure that it didn’t happen again. The greatest tribute to their sacrifice is that countries who were once sworn enemies are now friends, working side by side for the peace, health and prosperity of us all.

“Today it may seem hard that we cannot mark this special anniversary as we would wish. Instead we remember from our homes and our doorsteps.

“But our streets are not empty; they are filled with the love and the care that we have for each other.

Prince Charles and the Duchess of Cornwall observing a two minute silence to mark the 75th anniversary of VE Day
(Image: PA)

“And when I look at our country today, and see what we are willing to do to protect and support one another, I say with pride that we are still a nation those brave soldiers, sailors and airmen would recognise and admire.

“I send my warmest good wishes to you all.”

As millions across the country paused at 11am on Friday to remember those who served in the Second World War the poignant moment was led by the Prince of Wales and the Duchess of Cornwall, who each laid a wreath at a memorial near Balmoral.

Camilla placed spring flowers on the memorial, which were picked personally by Her Royal Highness from the garden at Birkhall.

Charles’ handwritten message with his floral tribute read: “In everlasting remembrance”, while Camilla left a note with her bouquet in memory of her father Major Bruce Shand, who served with the 12th Lancers during the war.

The duchess, who wore her 4 Rifles dress, because she is Royal Colonel of the regiment, and her 12th Royal Lancers regimental brooch, wrote: “In memory of my darling father and all the officers and men of the XII Lancers who fought so bravely to give us peace.”

Wreath and flowers laid by the Prince of Wales and the Duchess of Cornwall during an event to mark the 75th anniversary of VE Day
(Image: PA)

As part of the day’s commemorations, Prince Charles read an extract on the BBC from his grandfather’s diary from VE Day.

Describing the day in detail, including how Prime Minister Winston Churchill “came to lunch (and) we congratulated each other on the end of the European War” as well as the royal family’s iconic Buckingham Palace balcony appearance.

One passage referenced Charles’s mother, the Queen and her sister Princess Margaret as they famously escaped the palace and went incognito into the crowds that had gathered.

It read: “Lilibet and Margaret with a party of friends walked in the crowd after dark to see London in festive mood. Poor darlings, they have never had any fun yet.”

As part of the commemorations the Duke and Duchess of Cambridge were said to be “in awe” of stories of Churchill’s “secret” birthday message to his son when they chatted to Second World War veterans about their VE Day memories.

Champagne was flowing when William and Kate made a video call on Wednesday to residents of an East Sussex care home to listen to them reminisce about the day the war ended in Europe on May 8, 1945.

Daily Mirror Online shared some stories from survivors of the conflict.

Gillian Holding, 83 and from Sheffield, South Yorkshire, said she remembers her aunty gave her and her siblings some money and coupons to help arrange a party on a green, open space near their home.