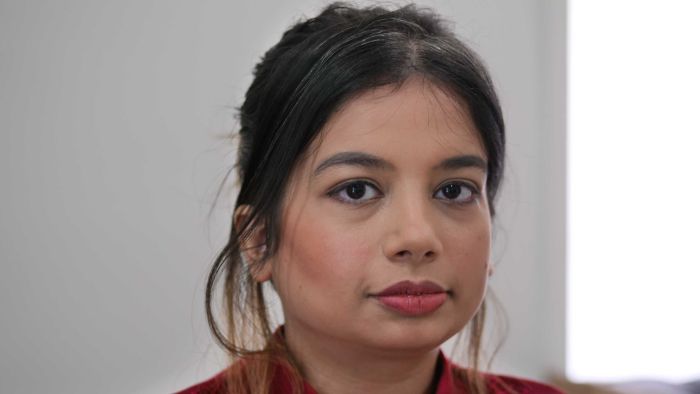 Family shame and an arranged marriage await Natasha if she returns to India without finishing her university degree — prospects that are all the more heartbreaking after years of saving and sacrifice.

Key points:International students are weighing up difficult decisions as the pandemic threatens their plansOne student facing arranged marriage says a university degree could change the rest of her lifeThe Federal Government says current support for international students is worth “$1.3 billion”

Close to realising her dream of starting her own business before the pandemic hit, Natasha is one of thousands of international students facing the life-changing decision of whether to leave Australia.

But for someone who took out a $15,000 loan and came to Australia against her family’s wishes, the idea of leaving now, six months away from completing her studies, is “unimaginable”.

“That feeling of shame and embarrassment that I wasn’t able to cope will be very hard,” Natasha said.

She is not against the practice of arranged marriages, but Natasha, who is in her mid-20s, says her family will have less power to choose her husband as she grows older and gains more independence.

“You never know who you’re going to end up with,” she said.

“I want to achieve something first.”

A degree from an Australian university will help maintain her independence.

The Morrison Government says foreign students should be supporting themselves first and foremost.

Natasha has applied for more than 100 jobs in the past month.(ABC Radio Sydney: Matt Bamford)Applied for ‘100 jobs’

International students are not eligible for the Government’s JobKeeper or JobSeeker programs for those in financial hardship because of the pandemic.

Despite her difficult situation, Natasha says she does not want “charity”.

Since being stood down from her job at Sydney International Airport, she has been living off her savings and superannuation of about $2,500.

She was saddened to hear Prime Minister Scott Morrison tell international students unable to support themselves to “go home”.

“All students who come to Australia in their first year have to give a warranty that they are able to support themselves for the first 12 months,” Mr Morrison said last month.

“They’re not held in Australia compulsorily … there is the alternative for them to return to their home countries.”

Natasha said visitors to India would be treated differently.

“In my culture we treat guests as gods, that’s what we have been taught all our lives,” she said.

“I trusted Australia, I made a decision against my family, so don’t tell us to go back.”

Law student Abbey Shi “fell in love” with Australia during a high school trip from China.

“Everyone is so lovely here and it is very multicultural,” she said.

“I saw [migrants] building their community here, bringing their culture from China and contributing to the Australian economy.”

“I’ve been to Europe and it’s not like this.”

But the COVID-19 crisis has caused Ms Shi to consider returning to her family, at least temporarily.

Abbey Shi says it has been tough being away from her family, but she holds the values of Australia dear.(ABC Radio Sydney: Matt Bamford)

“I’ve been very distant from them and it’s difficult because they can’t offer any physical assistance,” she said.

“It has taken a toll on me but I value the fundamental societal views here, like democracy and that people have a say in society.”

As the general secretary of Sydney University’s Students’ Representative Council, Ms Shi has organised care packages and accommodation for students at risk of homelessness.

“We help those in extreme financial difficulty find a room through our friends,” she said.

She wants the State and Federal governments do more.

“I would like to see more financial and emotional support for international students, especially the state of New South Wales,” she said.

Nepalese student Bikas Sapkota was working 20 hours a week as a cleaner until he lost his job.

“It happened all of a sudden, it’s been really difficult for me,” he told ABC Radio Sydney.

His savings are now drying up and next semester’s fees are due soon.

“I’m almost out of money, if this goes on for much longer, I don’t know what to do,” he said.

The Sydney Nepalese community has helped him get basic supplies, including food, but it is not enough.

He said his future in Australia looks bleak without financial assistance.

Your questions on coronavirus answered:Government response

“International students continue to have access to our world-class health system throughout this pandemic,” he said.

“Students in hardship, who have been in Australia longer than 12 months, can access their superannuation.”

Those working in “critical sectors” like aged care and nursing, can work more than the 20 hour per week limit.

A NSW Government spokesperson said it was helping students through Study NSW, and will consider additional support.