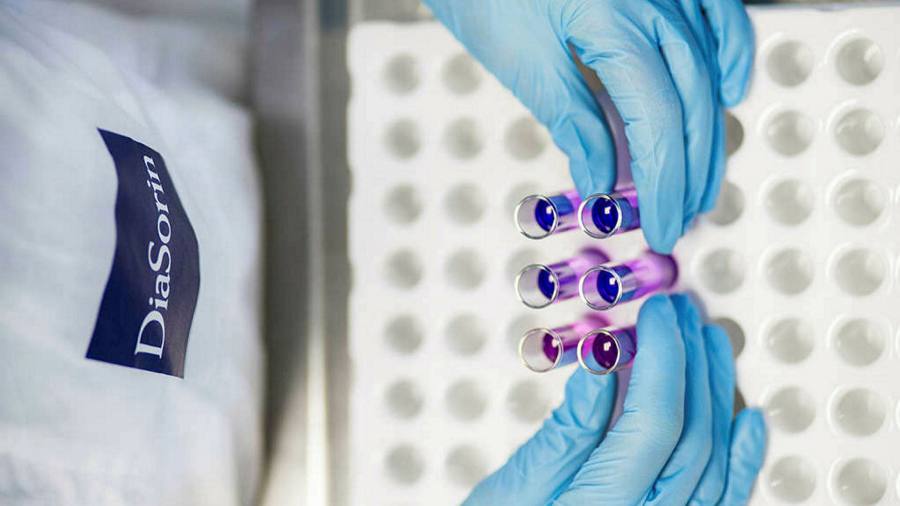 The mass testing that is central to lockdown exit plans in many countries is unrealistic because of high costs and lack of production capacity, according to the boss of an Italian biotech company that supplies tests around the world.

Carlo Rosa, chief executive of DiaSorin, which sells Covid-19 diagnostic and antibody tests, said demand far exceeded supply and the percentage of people who had contracted the virus globally was too low to hope for mass immunity as another way out of restrictive lockdown measures.

“Catching the virus in its early stage is the only solution but it works to the extent unlimited tests are available and you can immediately isolate and trace the positives; [antibody] tests help track asymptomatic patients and provide some information about protection,” Mr Rosa told the Financial Times. “But tests today are linked to complicated and expensive molecular technologies . . . and the demand is much higher than the offer.”

Several European countries, including Italy, France, Spain and the UK, have begun to ease restrictions.

Estimates of infection rates vary widely but, according to research by the Italian Institute for International Political Studies (ISPI) based on figures from European governments, Belgium has the highest percentage of citizens with some degree of potential immunity in Europe: 6.4 per cent of the population has contracted Covid-19. In Italy, the figure is 4.4 per cent, in the UK it is 3.8 per cent and only 0.7 per cent of the population has had the disease in Germany.

“Even if these numbers were underestimated by 50 per cent, the majority of people will continue to be exposed to the virus, mass immunity is a fantasy,” said Mr Rosa. “Nobody knows what will happen next, we must be prepared, especially when the annual flu season begins in the autumn.”

Diagnostic tests to detect if someone currently has the virus are done by taking a nose or throat swab, while antibody tests, which tell if a person has already had it, require a blood sample.

DiaSorin is working to develop a faster and cheaper salivary swab test.

“It would be easier to use and produce in hundreds of millions of samples,” said Mr Rosa. “The challenge is making it as accurate as [existing tests] but based on a simple technology.”

The company is based in Saluggia in northern Italy and is the only authorised Covid-19 antibody test provider in Lombardy, Europe’s single-most affected region. It is also one of the seven companies that received an emergency authorisation by the US Food and Drug Administration to sell Covid-19 tests.

It produces half a million Covid-19 diagnostic tests in its Californian hub and millions of antibody tests each month.

This month, it won contracts with the Belgian, German and Israeli governments to provide Covid-19 testing kits. The Italian government public tender was won by US multinational Abbott.

DiaSorin is due to publish quarterly results on Wednesday. Since the start of the year, its market capitalisation has grown more than one-third to €8.7bn, even though routine diagnostics activity has dropped by between 50 per cent and 80 per cent in the US, China and Europe, the company’s main markets.

Analysts now expect Covid-19 tests to increase the company’s revenue significantly in 2020 and 2021.

But Mr Rosa is not fully satisfied: “What Covid-19 has taught us is that diagnostics must focus on respiratory diseases. These are much harder to fight than those that are transmitted through blood or other body liquids, like Ebola, for example.”

The future lay in rapid tests that could be carried out locally, without the need for complex hospital and laboratory facilities, he said. “We can’t afford other lockdowns. Imagine how different the current situation would have been if we had the ability to identify insurgent hotspots through small testing instruments widely available across local communities.”

Don't Miss it UN says 7 or 8 `top’ candidates for a COVID-19 vaccine exist
Up Next South Korea reports 27 new cases as health workers work to test thousands of people who visited nightspots; Australia faces ‘sobering’ future economy due to coronavirus