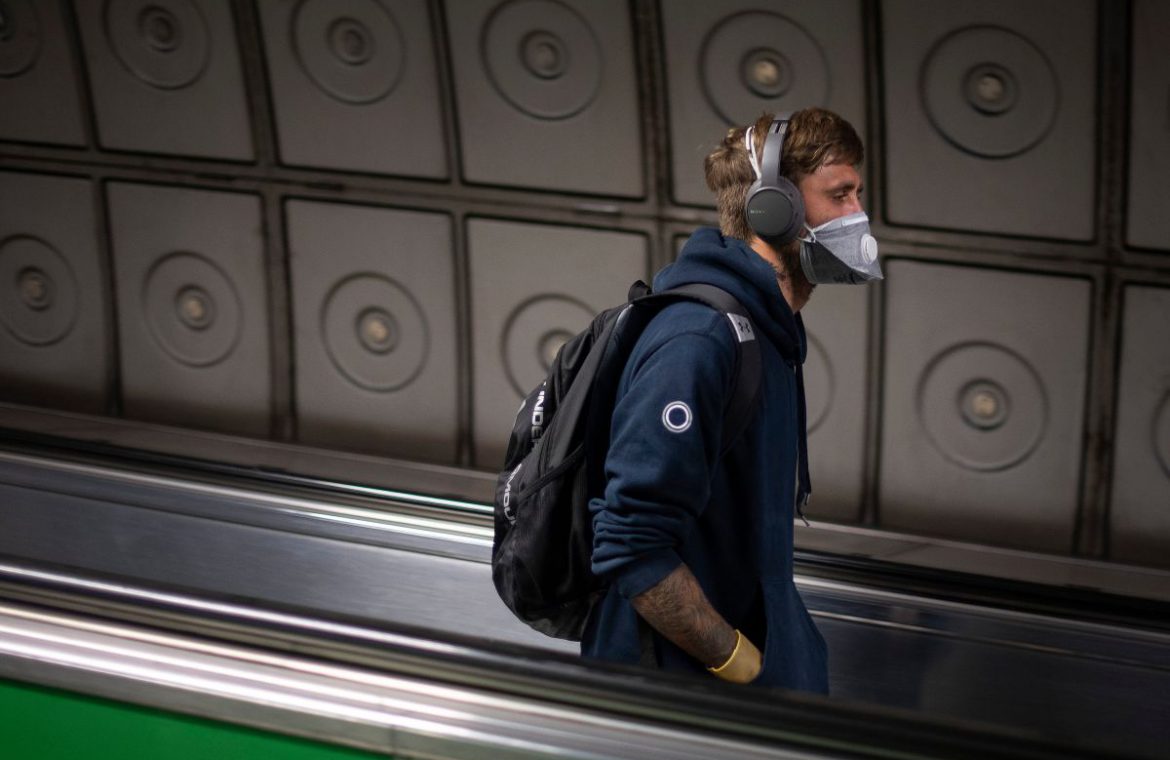 CORONAVIRUS deaths in the UK have risen to 32,692 after 627 more fatalities were recorded in the last 24 hours.

Another 3,403 have now tested positive for the virus, meaning 226,463 are now infected in the UK, the Department of Health confirmed.

A passenger wears a face mask on a walkway at Waterloo underground station in LondonCredit: PA:Press Association

The latest death toll refers to those who have died in all settings – including care homes, hospices and the wider community.

Today’s rise in deaths is bigger than it was the previous two days, when 210 and 269 fatalities were recorded respectively.

This is likely to be due to a lag in reporting over the long bank holiday weekend – which tends to see lower numbers before jumping again at the start of the week.

The rise is in fact lower than any rise recorded on a Tuesday for the last six weeks.

In England, 23,708 have now died from the bug after 350 more fatalities were announced today.

In Scotland, the death toll reported by the Scottish Government is 1,912, after 50 died in the last 24 hours.

In Wales, 16 more deaths were confirmed overnight, bringing the deadly tally there to 1,132.

The toll in Northern Ireland is now 447 – up nine from yesterday.

New analysis published today suggests Britain’s overall death toll from the virus is far higher, however, than the total reported by the Government so far – and has already passed 40,000.

The figures, tallied up by the Office for National Statistics, refer to all deaths where Covid-19 was mentioned on death certificates this year until the beginning of May.

They reveal that almost 10,000 people have died from the bug in care homes across England and Wales – including 1,558 deaths in just one week.

Among the latest UK deaths is frontline train station worker Belly Mujinga, 47, who died of coronavirus days after a passenger spat at her claiming to have the bug.

At least five pregnant women have also died after being admitted to hospital with the virus.

One expectant mum, Fozia Hanif, 29, died before getting the chance to hold her son, Ayaan – who has finally been allowed to return home from hospital.

The women were among 427 mums-to-be admitted to hospitals with the bug from March 1 to April 14, according to new research by the University of Oxford.

The university has also suggested as many as 140,000 are infected with the bug in England – higher than current testing suggests.

Experts estimate more than one in 400 are unwell with Covid-19 — and are able to spread the disease.

The university’s Prof Carl Heneghan said of the data: “It shows we have nearly 140,000 infected with Covid, which is far more than we are picking up through testing.”

“Fewer than 4,000 people a day are testing positive. Why are the rest of these cases not coming forward. Is it because they are asymptomatic?”

It could be a long time before a coronavirus vaccine is found, with the Prime Minister admitting last night that we may never find one.

Addressing the nation, Boris Johnson warned of “large epidemic waves” in the future, adding: “A mass vaccine or treatment may be more than a year away. Indeed, in a worst-case scenario, we may never find a vaccine.

“So our plan must countenance a situation where we are in this, together, for the long haul, even while doing all we can to avoid that outcome.”

On Sunday the PM outlined the “first careful steps” for easing the lockdown as part of a three-phase plan to get back to normal life.

In an address to the nation he revealed a roadmap for getting England back on its feet, showing his new “stay alert, control the virus and save lives” slogan.

But the new guidelines, which do not apply to Wales, Scotland and Northern Ireland, have been met with criticism for lacking clarity and detail.

Boris has since urged the public to “use common sense” when interpreting the new rules, which are expected to be explained in more detail this week.

Today, Rishi Sunak announced Britain will extend its furlough scheme until the end of October as part of the new measures.

The unprecedented job-retention scheme will remain the same until July – with workers paid 80% of their wages by the Government – but changes will emerge from August.

The Chancellor said businesses will be expected to start chipping in to help tackle the burden on the taxpayer, and there will the ability to pay people part-time instead.

GRIM DISCOVERYBody found in search for missing estate agent, 23, who vanished 3 weeks ago

He will cut the amount of funding the Government puts into the programme – which is currently costing £14billion every month – but stressed there would be no cuts to the amount of salary workers will be able to get, as businesses will have to pay a chunk.

Meanwhile, children could be sent to different schools with classrooms cut in half – in a bid to get Britain back to normal.

Grandparents could also be reunited with little ones next month as Government scientists work on plans to allow over-70s to see members of another household.