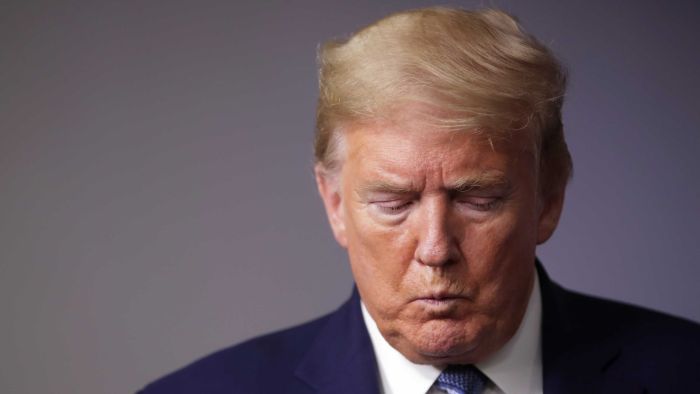 At least two White House staffers, including one of Donald Trump’s personal valets, have tested positive for coronavirus.

Nearly all of the individuals who work with the President are being asked to wear masks, even while he refuses to cover his face.

White House officials are reportedly scrambling to contain what they see as an outbreak that could spread throughout the cramped, cluttered offices of the West Wing.

And we can’t be the only ones wondering … what would happen to the election if 73-year-old Trump came down with COVID-19?

Trump’s rival, 77-year-old Joe Biden, is just as much at risk of the virus, and has been staying inside and keeping campaign events to the virtual stage

No party candidate for a presidential election has died before accepting the nomination or before being sworn into office.

Eager to plot out the prospective campaign trail should the worst happen, we called New York University School of Law’s Richard Pildes and Director of Governmental Studies at the Bipartisan Policy Center, John Fortier.

The answer all depends on timing, so we’ll tackle each major stage left in the campaign, starting with…

Before the party conventions in August

It’s very clear who takes over should a sitting president become incapacitated, die, resign or be removed from office — the vice president.

Should any of the above happen to Trump before inauguration day in 2021, Mike Pence would become president. He’ll occupy the White House at least until he won re-election or another winner is sworn in.

The order of succession is clearly laid out in the Constitution.(Reuters: Joshua Roberts)

Pence wouldn’t automatically pick up the Republican nomination to be the candidate to take on Joe Biden in November. There’d still be a nominating convention, and the delegates could vote against him if they wanted to (especially if the Republican party asked them to).

“The convention is certainly free to nominate whoever the majority of the delegates prefer. The delegates at the convention formally have the power to decide who is the nominee of the party,” Pildes said.

But Pence would be the most obvious heir apparent.

On the Democratic side, the pre-convention period would be the easiest time to substitute a candidate for Biden if needed.

While the former vice president is the presumptive nominee, none of the delegates who attended the convention are legally obligated to vote for him.

If he’s suddenly unavailable, it’d be up to them to choose a different candidate on August 17. And it wouldn’t automatically go to Bernie Sanders, just because he finished with the second-most delegates.

The Democratic party could even draft in a nominee who didn’t participate in the primary campaign (just don’t count on it being Michelle Obama).
We have no idea if party conventions will look the same as they have in previous years.(Reuters: Scott Audette)

After the conventions in August, before the election in November

Once the nominee goes from “presumptive” to “official,” things get tricker.

The parties can’t host another round of primaries in such a short time.

Republicans and Democrats have slightly different rules for what could happen, but the idea is more or less the same — the decision rests with the national party committees.

Who will be Joe Biden’s VP?

The committees are a couple of hundred people (think party elders, senior elected members, former presidents) who will have to decide which candidate should take charge.

“Ultimately, it’s the decision of relative insiders that the American people don’t know. And they’re in charge of putting somebody in charge of that ticket,” Fortier said.

On the Republican side, there’s an option to host a second convention, which means calling back all the delegates for another round of voting.

This feels unlikely, given the complications of meeting during a pandemic and the likelihood of Pence being the candidate to carry the Trump agenda forward if the president can’t do it himself.

Elevating the VP pick into the presidential nominee spot is the easiest and most obvious solution for both parties. Biden isn’t expected to announced his choice until at least July though.

They could do some polling to test the waters, but the committees run the risk of losing voters if they pick a totally new candidate.

There’s another little hitch to this stage

The physical ballots that Americans use to vote are often printed weeks, sometimes months, in advance.

That task could be unprecedented this year if efforts to allow Americans vote by mail ramp up.

Ballots need to be sent to Americans living overseas or those serving in the military.(Reuters: Shannon Stapleton)

If Trump or Biden perish close to the big day, not all states would have the resources to swap out new ballots, and delaying the election is next to impossible.

So yes, voters could, hypothetically, be checking the box for…a dead man.

It might be confusing for Americans, but it’s not as bad as it seems thanks to the electoral college.

US voters are never really voting for president. They’re voting for one of 538 people sent to represent their districts in a final vote that takes place in mid December.

Voters would still pick his name on the ballot in November, hoping to send a Republican elector to the December vote to back whatever Republican candidate takes Trump’s place.

What’s next? ‘The worst thing that could happen’

Pildes calls the next period — about six weeks after the election — the “messiest situation in our system” if a candidate is incapacitated.

“I think that’s actually one of the worst things that could happen, because there’s not absolute agreement on what Congress will do about counting that vote,” Fortier said.

We have to get really specific on the timing here.

If the death or extreme illness happens after Americans vote on November 3, but before the electoral college votes in mid December, the same rules apply as above.

The national party would pick a new candidate — most likely the VP on the ticket — and the members of the electoral college would, in all likelihood, vote for that candidate.

They don’t have to, though. Only some states legally bind the electors to vote for the candidate voters choose. The rest are legally free to vote for who they want, and an extraordinary situation like a president-elect dying would throw a huge spanner in the process.

What the experts are saying about coronavirus:Your questions on coronavirus answered:

But what if the worst happens between the electoral college meeting in mid-December and inauguration on January 20?

It all hinges on when Congress counts the electoral college votes and declares a winner, which happens during a big symbolic joint-session during the first week in January.

If a death happens after Congress counts electoral college votes, the order of succession applies and the VP on the winning ticket would be sworn in as President on inauguration day.

But if the death happens before Congress counts the electoral college vote?

No one really knows! It’s a huge constitutional mess.

“This is an unfortunate gap in our legal structure. We don’t have anything in the Constitution or elsewhere that specifies what happens in that circumstance,” Pildes said.

Congress could just count the votes and let the order of succession play out. Or they could say the votes for the dead person are now illegitimate.

And if no candidate gets a clear majority of the votes, the House of Representatives could hold their own vote for president, giving each state a single vote to cast. The Senate would decide the vice president.
Joint sessions of congress are normally symbolic affairs.(Reuters: Joshua Roberts)

It’s not even a problem America’s Supreme Court is likely to solve.

“There are certain kinds of issues that they consider so inherently ones to be resolved in the political process, that they would not view it as an appropriate judicial role,” Pildes said.

“The court doesn’t want to be in the position of picking the president of the United States. That’s very bad for the court as an institution.”

If it sounds absolutely crazy, remember that a situation like this has never happened before.

And it’s hardly like 2020 will be known as a year for wading into uncharted territory, right?