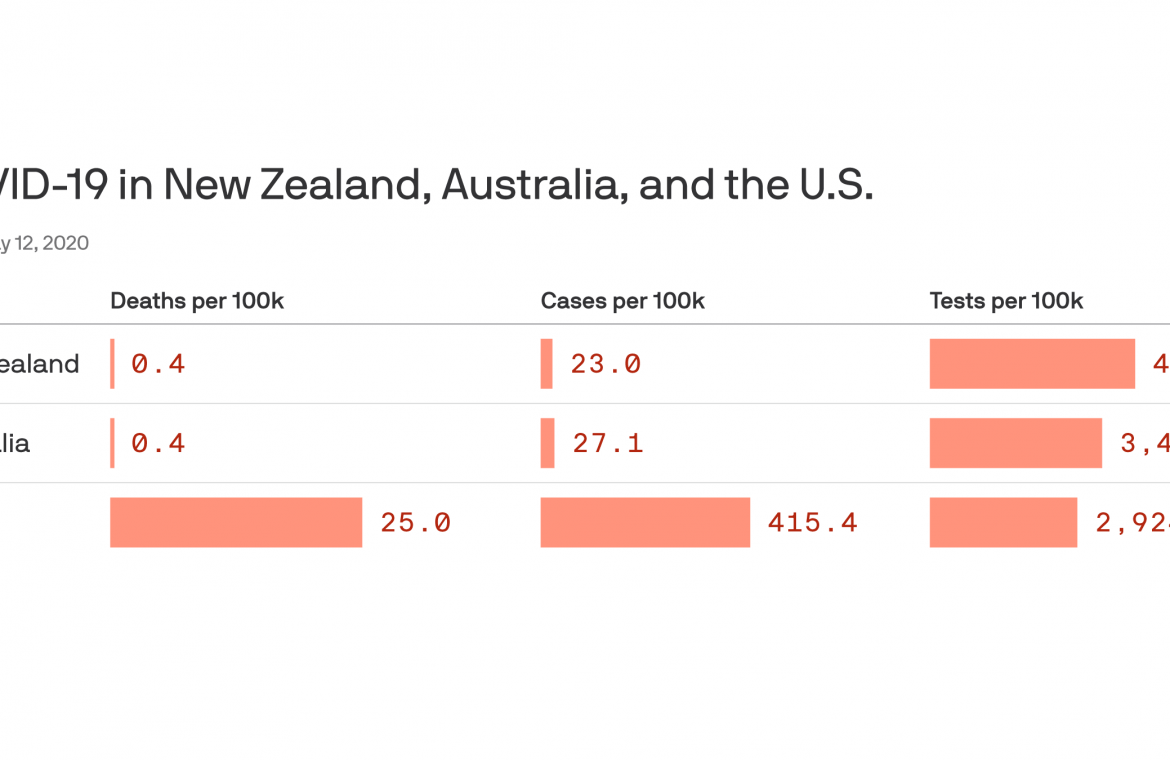 AUCKLAND, New Zealand — Australia and New Zealand are reopening their economies from coronavirus constraints and are on track share a “COVID-safe travel zone” within weeks.

Why it matters: New Zealand is ending some of the world’s toughest lockdown measures this week, after eliminating community spread. Australia is on course to suppress the virus and remove all domestic restrictions by July.

What they’re saying: “If we wish to reclaim the ground we have lost, we cannot be too timid,” Australian Prime Minister Scott Morrison said on May 8, announcing a three-step plan to reopen the economy “in a COVID-safe way.”

“We went hard and we went early. We got control of the virus, and now we’re in a position where we can safely step out of those controls and open our economy back up,” New Zealand Prime Minister Jacinda Ardern said on May 11.

What’s happening: Australian retail re-started on May 4 and school resumed May 8 following weeks of single-digit or zero daily cases.

On May 13 New Zealand starts a monthlong gradual relaxation of restrictions, with retailers and restaurants among the first to reopen.

Between the lines: Conservative Morrison and progressive Ardern are drawing on the two countries’ close economic and diplomatic ties to develop plans that benefit both nations.

A priority is reopening borders to each other within six weeks, said Shaun Hendy, who heads a scientific body advising the New Zealand government.A Kiwi rugby team is in quarantine in Australia as the test case. The season resumes May 28. The “travel bubble” could expand to coronavirus-free South Pacific island nations in July, but borders won’t fully reopen for some time, Hendy said.

Threat level: Australia’s Treasury forecasts restrictions would cause unemployment to double to 10% and the economy to shrink 10% in Q2.

Situational awareness: “The U.S. is talking about opening up, and from our perspective, we would say that’s far too early,” Hendy said. “We’re going to be doing it with the luxury of just a handful of cases that we can very much link.”

Hendy attributes their success to testing capacity, contact-tracing and getting “on top of the disease before you unlock.””Then you won’t have to put your economy at risk by having to lock down again or simply having the disease do damage to your economy,” Hendy said.

The bottom line: Allen Cheng, an epidemiology professor at Melbourne’s Monash University, told Axios while the measures worked, the issue now is “how to maintain sustainable suppression while mitigating all the social and economic damage that lockdowns have caused.”