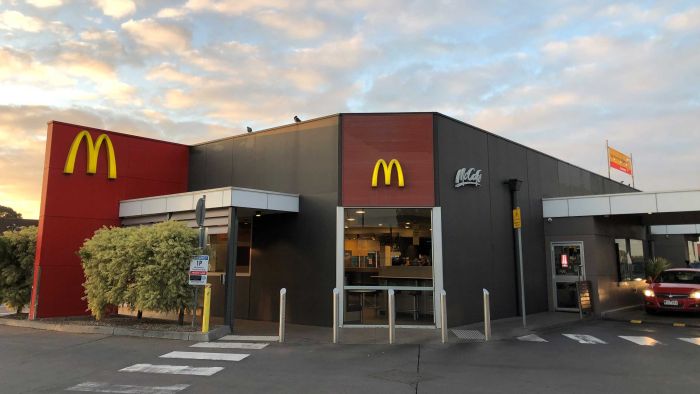 Victoria’s Chief Health Officer has conceded the Cedar Meats abattoir probably should have been closed sooner, as the number of coronavirus cases linked to an outbreak at a McDonald’s franchise in Melbourne’s north has risen to eight.

Key points:There are now eight cases of coronavirus associated with the Fawkner McDonald’s and 90 linked to Cedar Meats AustraliaBrett Sutton said “maybe we shouldn’t have waited” to close the Cedar Meats abattoir after the first cases were recordedThe total number of cases in Victoria currently stands at 1,523

Nine new cases of coronavirus have been identified in Victoria by the Department of Health and Human Services (DHHS), taking the total number of cases in the state to 1,523.

Three of the cases were in returned overseas travellers in hotel isolation, two were related to the McDonald’s cases and another three cases were identified as Cedar Meats Australia employees.

In total there are 90 cases related to the meatworks in Melbourne’s west, after one case previously connected to the outbreak was reclassified.

Brett Sutton said the plant probably should have been closed after two cases were linked to the plant rather than waiting for more.

Speaking to Melbourne radio station 3AW, Professor Sutton said there were always lessons to be learned from these “explosive outbreaks”.

The DHHS confirmed the first case linked to the abattoir was diagnosed on April 2, but as the worker had not been at Cedar Meats for four weeks, the abattoir was not considered an exposure site.

The second and third cases linked to the workplace were diagnosed on April 24 and 25, and were the first indication of a possible cluster.

The abattoir is now linked to 90 of Victoria’s coronavirus cases.(ABC News: Sean Warren)

The third case was diagnosed after the worker developed symptoms while at Sunshine Hospital with a severed thumb from a workplace injury.

This was the first time Cedar Meats said it became aware one of its employees had been diagnosed with COVID-19.

Five people can visit another household and 10 people can gather outdoors. Golf and fishing is back but shopping for non-essential items is still not allowed and there’s no relaxation for cafes and restaurants.

Professor Sutton said that two cases, in a that kind of setting, suggested the transmission had occurred at the workplace, and was probably enough to shut a place down.

“Maybe we shouldn’t have waited for a third linked case. For these linked settings, we should shut the entire place down,” he said.

Professor Sutton said there were always lessons to be learned and that the handling of the meatworks case would be the subject of a debriefing at a later date.

Cedar Meats closed its doors for 14 days after news of the outbreak was made public, and is due to open its cold storage facility on Monday.

The State Opposition has criticised the Government and DHHS for their handling of the cluster, with Opposition Leader Michael O’Brien calling for an independent inquiry into the outbreak.

Latest information from the Victorian Government

Jacinta Allan, the Minister for Transport Infrastructure, said Cedar Meats, like many businesses, was working with the DHHS and the Chief Health Officer and taking advice on “how to appropriately operate their business if they’ve had a case”.

She also defended the health department’s handling of the outbreaks, saying the number of cases showed just how dangerous the virus was.

“It’s entirely appropriate that the Chief Health Officer acknowledges that they’re working hard to learn the lessons at the same time as working with the community,” she said.

Meanwhile, McDonald’s Australian boss Andrew Gregory said the number of cases associated with the cluster at the Fawkner restaurant was now eight, including four workers and four family members related to one individual.

More than 90 staff at the restaurant are being tested after six people linked to the store contracted coronavirus.(ABC News: Zalika Rizmal)

“Our major priority is to make sure all of those people are well and recovering,” Mr Gregory told Melbourne radio station 3AW.

The franchise employs 100 staff and “the vast majority” of them have been tested, he said.

“And the vast majority of those [tests] have come back negative,” he said.

“But it’s still possible over the coming days as we continue to get those tests … we will get a number of positive infections.”

The restaurant closed when the first cases were diagnosed, but after a deep cleaning and the installation of protective shields, it has been reopened with employees from surrounding restaurants.

The drive-through was still doing a brisk business on Thursday morning.

More than 90 staff have been tested and were sent into self-isolation pending the outcome of their tests.

“We continue to work collaboratively with the Department of Health,” the company said in a statement.

Professor Sutton said there were no links between Cedar Meats and McDonald’s clusters, but in both cases the first contact did not end up spreading the virus.

At Cedar Meats, the first case said he had not been working at the factory while he was infectious, but Professor Sutton said there obviously was a “chain of contacts” through family and friends.

“I think what’s happened is the individual has not been at work, but has picked it up through those contacts,” he said.

Other staff had probably “imported” the virus into the facility a week or more before authorities picked up the first case, he said.

The same thing happened at McDonald’s.

The first case had not been at work while he was infectious, and was not deemed to have given it to any of the other later cases.

“[It’s a] coincidence in the sense that the early individual hadn’t given it to the later individuals, but they’re probably all linked through some undetermined family and friends.”

Professor Sutton said he was concerned about an increase in cases from the two clusters, but given they know where the cases were coming from, it was easier to control.

“We can manage all of these outbreaks; they start with one case and if they can end — it’s all over,” he said.

He said a shrinking number of patients in intensive care was “a very good sign”.

What you need to know about coronavirus:Space to play or pause, M to mute, left and right arrows to seek, up and down arrows for volume.WatchDuration: 4 minutes 44 seconds4m 44s How effective and how safe is the COVIDSafe app?