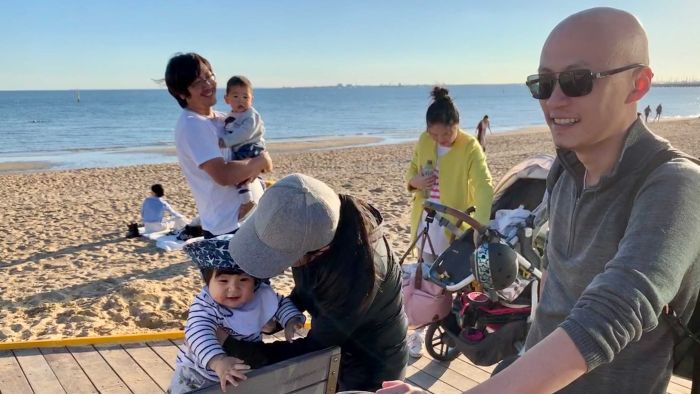 People across Australia have been quick to return to the activities prohibited under coronavirus social-distancing measures.

Key points:Every state and territory’s rules around gatherings and travel are slightly differentTasmania is bringing in a raft of changes from Sunday, while WA is further easing restrictions on MondayDeputy Chief Medical Officer Michael Kidd said Australia has conducted over a million COVID-19 tests

Families returned to playgrounds with excited kids, beachgoers were up early and out enjoying the sun, and some were thrilled just to be able to sit down for a coffee or a pub meal.

Deputy Chief Medical Officer Professor Michael Kidd said as restrictions eased, it was critical for everyone to adhere to the physical distancing measures under which we have lived for the past months.

“People do feel a little bit relaxed in some parts of the country now we’ve had the very small step of lifting the restrictions, and we can’t afford to become complacent, we must remain vigilant,” he said.

“The pandemic is not over, the risk to vulnerable people remains significant in Australia.

“It’s essential we all continue to do our part.”

Coronavirus update: Follow all the latest news in our daily wrap. People at Mermaid Beach play volleyball for the first time since coronavirus restrictions were introduced.(ABC News: Matthew Eaton)

As he gave an update on the latest numbers, Professor Kidd confirmed that 1,015,652 COVID-19 tests had been carried out.

There had been 20 new cases in the previous 24 hours, with no additional deaths.

On Saturday, it seemed people had mostly kept up the measures that helped flatten the curve. Check out how things played out across the states and territories.

Queensland Many of the people who were out for breakfast at this Queensland cafe as restrictions eased ordered the eggs benedict.(ABC News: Tara Cassidy)

Despite restrictions easing from Saturday, only a handful of cafes on the main dining strip of the Sunshine Coast’s Mooloolaba Esplanade had opened.

Lot 104 Espresso and Wine Bar crew member Lisa Rizolli said their venue had chosen to open for limited hours, three days a week, and she was pleased to be seating guests again.

Lisa Rizolli said it was nice to have customers return despite challenges around distancing measures and customer numbers.(ABC News: Tara Cassidy)

“It’s a very different type of service now with restricted numbers, it’s hard to seat everyone, we can’t have anything on the tables, all four-square metres apart,” she said.

According to Ms Rizolli, despite customers being limited, all were grateful to be able to dine out again.

Noosa’s Hastings Street was buzzing with people, but only a dozen cafes had reopened for breakfast and lunch services.

Joanne Reweti was happy to be back playing volleyball at Mermaid Beach.(ABC News: Matthew Eaton)

At Mermaid Beach on the Gold Coast, people were back playing beach volleyball for the first time they have been allowed to since coronavirus restrictions were introduced.

Many were smiling and happy to be outside involved in a team sport.

Joanne Reweti was among those who had returned for a game at the beach where, before restrictions, up to 100 people could be playing at one time.

“Quite a few turned up this morning and we had to disperse and wait but it was good, and now we have ended up with about six or eight of us.

“We have just been playing and it doesn’t matter that we’re a bit uncoordinated, we’re having some good games and it is just nice being in that sand and fresh air.”

Edwina Flower and son Darcy, 2, made a beeline for the playgrounds when they were reopened by Gold Coast Council.(ABC News: Jennifer Huxley)

Edwina Flower and her two-year-old son Darcy were so excited about playgrounds being reopened from Saturday they had visited several.

“I don’t know if I am more excited or Darcy has been, it is so good to be back at the playground,” Ms Flower said while at Mermaid Beach.

Steve Ball said he was almost overwhelmed at being able to sit down at a cafe for a snack and a coffee.(ABC News: George Roberts)

In Brisbane, Steve Ball ordered his first sit-down coffee and croissant in weeks.

The simple act of ordering breakfast at a Paddington cafe has the father of three chuffed.

The Tattersalls Hotel in Winton opened its doors for lunch for the first time in months on Saturday.

Publican Paul Neilsen said it was a soft start but a cautious approach to reopening was necessary.

Paul Neilsen has been enjoying chatting with returning customers as he clears tables at his pub in Winton.(ABC News: Craig Fitzsimmons)Read more about coronavirus:New South Wales Diners return to Speedos Cafe in Bondi Beach after the lifting of restrictions.(AAP: James Gourley)

Pubs, clubs, restaurants and cafes have enjoyed their first day of sit-down customers in weeks, after some coronavirus restrictions were eased in NSW.

Only 10 customers are allowed inside at a time, with social-distancing rules in place.

That allowed many people to return to their usual Saturday morning routines, including brunch and the beach.

Joe Maree from the Rose Hotel in Sydney’s inner-west said it had been a busy return to business.

“We’ve had to turn away a few people and say no to a few bookings and try and juggle this 10-person rule, but it’s been quite good.”

At some Sydney cafes, it was hard to find a table due to the customer limit.

The Rose Hotel had seen a busy return to business and had to turn some hopeful potential customers away.(ABC News: Sarah Thomas)

Some beaches in the city’s east, including Bondi and Bronte, were again allowing people to be on the sand for recreation.

But rangers were enforcing a cap of 500 people by counting those entering and leaving the beach.

This weekend is the first time people have been able to swim laps in outdoor pools or use public exercise equipment.

People were allowed to swim in rock pools at Bronte again for the first time since coronavirus restrictions eased.(ABC News: Emily Clark)

NSW Health Minister Brad Hazzard warned residents not to waste their new-found freedoms and to keep their distance from others.

He said he had personally observed people in breach of health advice.

NSW Police Assistant Commissioner Joe Cassar said the cold, rainy weather in Sydney had resulted in fewer people being out than would have been expected in better conditions.

He said the community should be congratulated for their adherence to regulations.

“We’re in a very, very positive situation with low numbers being recorded and we just ask members of the community to continue to comply with those conditions,” he said.

Find out moreNorthern Territory In Darwin, some people seemed to be ignoring social-distancing rules during the first chance they had to go into pubs again.(ABC News: Kate Ashton)

In the Northern Territory, where some were still shaking off last night’s party after pubs reopened, others were out and about enjoying the simpler pleasures afforded by newly eased restrictions in the Top End — like a cafe coffee in a glass, not a disposable cup.

Colin and Trish Smith said they were delighted to experience the novelty at the Nightcliff foreshore in Darwin.

“It’s good to come back now and be able to sit down in the dry season and have a coffee outside, it’s great,” Colin Smith said.

“It’s normal, it’s great, just like yesterday when I went to the pub for a drink,” Trish Smith said.

Colin and Trish Smith were delighted when they were able to sit down and and enjoy a coffee outside at a cafe.(ABC News: Cameron Gooley)

Berry Springs, a popular swimming spot south of Darwin, reopened this weekend and locals made the most of eased restrictions and warm weather.

It wasn’t only coronavirus restrictions which kept the park closed — it also had to be checked for crocodiles and pass water quality tests after the Top End’s wet season.

Berry Springs, a popular swimming spot south of Darwin, reopened on May 16 and locals made the most of eased restrictions and warm weather.(ABC News: Nicholas Hynes)

NT Police said they were generally happy with the behaviour of Territorians overnight, although noted some venues and people needed to do a little better to enforce physical distancing.

Commander David Proctor said they issued nine warnings to individuals and 13 to businesses across the Territory.

Stay up-to-date on the coronavirus outbreakVictoria Plenty of people in Victoria made the most of the good weather and were out for drives and walks.(ABC News: Nicole Asher)

It is the first weekend since Victoria’s coronavirus restrictions have been relaxed, allowing people to travel for the day to hike and surf.

Visitors flocked to places like Werribee Gorge, with big lines of cars parked along the road in, and a steady stream of cars heading towards the carpark.

In Melbourne, cyclists were back out on the city’s bike trails, enjoying the sun.

Melburnians were allowed out with decreased restrictions on Saturday.(ABC News: Scott Jewell)

As many Victorians headed out to enjoy their newfound freedoms, following the easing of some restrictions on Wednesday, Health Minister Jenny Mikakos urged people to stay home as much as possible and minimise contact with other people.

Around Victoria, tourist hotspots were inundated with visitors.

Sarah from Go Ride A Wave surf shop in Torquay said the town was busy, with about 100 people in search of food, coffee and a surfboard.

Kim from Mocha and Lime cafe in Healesville said it was busy, with at least a few hundred people visiting the town on Saturday.

Daytrippers also returned to Daylesford, lining up for takeaway coffees and lunches, with locals describing it as a 10-fold increase in crowds compared to previous weekends.

Motorcyclist Shane Walker was among those enjoying a day out at the spa town Daylesford.(ABC News: Nicole Asher)

Motorcyclist Shane Walker from Bacchus Marsh was among those enjoying a day out.

“We thought we’d get out on the bikes while the sun’s shining and there’s no rain,” he said.

“We’re enjoying not being locked down for a change.”

While the region relied upon tourism for its economic survival, she said it could not handle a coronavirus outbreak.

Daytrippers returned to Daylesford but the region’s mayor wants people to stay at home to prevent outbreaks.(ABC News: Nicole Asher)

In Western Australia and the Northern Territory, restrictions were eased earlier than in the other jurisdictions, with further limitations lifted in WA from Monday.

Tasmania first relaxed its coronavirus measures on Monday and is set to lift more restrictions on Sunday.

Don't Miss it Coronavirus: PM Should Reconsider Economic Package, Give Money To Poor: Rahul Gandhi
Up Next She’s 108, Lived Through the Spanish Flu and Just Beat Covid-19