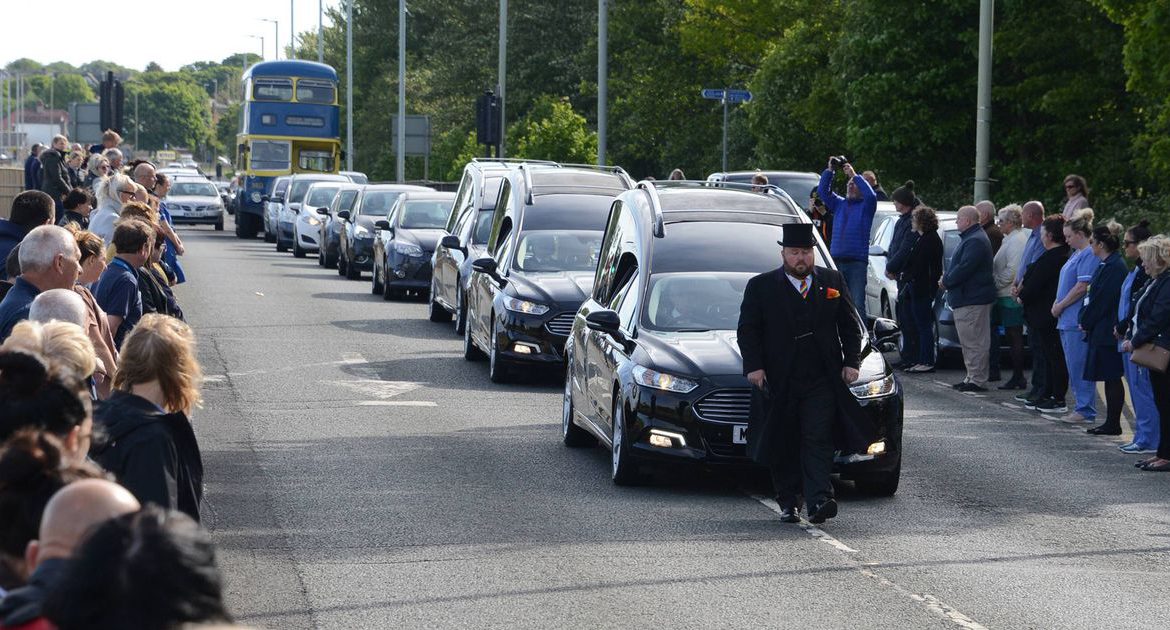 NHS staff lined the streets to give a poignant send-off to a “dedicated” frontline nurse and his parents who tragically all died of coronavirus.

Keith Dunnington, who was a “popular and hard working” staff nurse at Gateshead’s Queen Elizabeth Hospital, died on April 19 after supporting the NHS frontline in its fight against Covid-19.

His mum Lillian, 81, and dad Maurice, 85, also both died in hospital days apart in May after contracting the virus, Chronicle Live reports.

Hundreds of people – mostly health staff – gathered outside South Tyneside District Hospital and burst into applause as the hearses carrying Keith and his parents passed by.

Emergency workers including doctors, nurses and firefighters, briefly left their posts to honour the family ahead of a joint funeral service today.

They were pictured in uniform – some clapping and some with their heads bowed – to pay tribute.

A service followed at South Shields Crematorium which was restricted to immediate family.

Amazing Grace by Il Divo was played in honour of Maurice, as well as Lillian’s favourite song, Streets of London by Ralph McTell.

Lillian died on May 1 while holding hands with Maurice who had been brought to her from his bedside by staff – he then died within days, the Daily Mail reports.

Father-of-two Keith’s family described how he gave ‘200%’ to everything he did.

Staff in their uniform took time out this morning to pay their respects
(Image: North News & Pictures Ltd northnews.co.uk)

His cousin Debbie Harvey, 55, said he and his parents would be greatly missed.

She said: “He looked after people so well and stood up for them.

“He would stand up to the highest consultant if he thought his patient was in danger or needed help.”

Keith’s colleagues have previously described the 54-year-old, from South Shields, as a “selfless, hardworking and dedicated” man.

“Keith was a popular and hard-working member of our fantastic nursing team.

“He will be very missed by his co-workers here at the trust and by the patients he cared for.”

The trust said that although the father-of-two was “very much part of the QE family”, he was employed by nursing agency Pulse Jobs.

Lorna Duka, from Pulse Jobs, added: “Keith was a very selfless, hardworking and dedicated nurse who planned to help at the Nightingale during this pandemic.

“His positivity really stood out during this time; cracking jokes and asking me how I was coping.

“He always spoke very fondly of his family and his colleagues at Gateshead who he had the opportunity to work with regularly over the last year.

“He will be very much missed.”

Don't Miss it Coronavirus shakes up Australian workplaces, as businesses prepare for the other side | ABC News
Up Next Coronavirus update: Italy set to reopen border, fears Wuhan testing site may spread virus